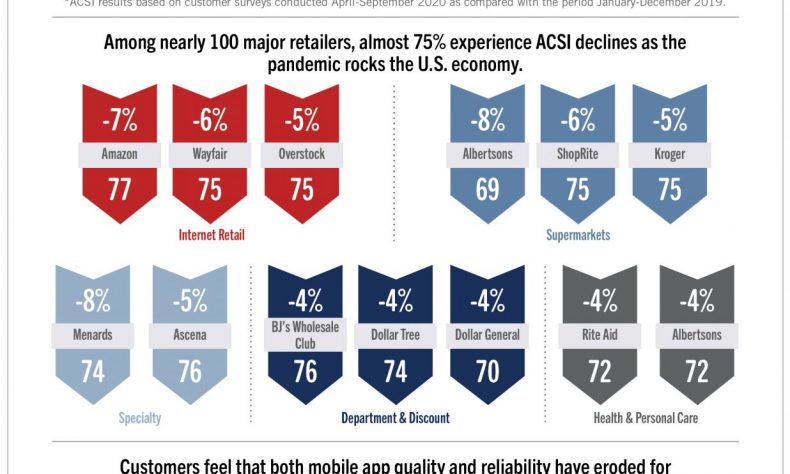 ANN ARBOR—To absolutely no one’s surprise, new survey results from the American Customer Satisfaction Index show that 2020 has been a tough year for retailers.

Four out of five retail industries the ACSI measures—department and discount stores, specialty retail stores, supermarkets, and internet retailers—have seen customer satisfaction wane during the pandemic, according to surveys collected from April 1 to Sept. 30.

Compared to ACSI’s 2019-2020 Retail Report, internet retail took the biggest hit during the pandemic, down 4.9% to an ACSI score of 77. Yet, it remained ahead of the other retail categories. Specialty retail stores (down 2.6%) and drug stores (unchanged) tied for second at 76, while department stores (down 1.3%) and supermarkets (down 3.8%) both scored 75.

“From the onset of COVID-19, consumer expectations of retailers took a massive hit,” said David VanAmburg, managing director at the ACSI. “Customers braced for delayed packages, empty grocery store shelves, and hard-to-find name brands. Of course, just because they expected this doesn’t mean they were thrilled about it. As customer satisfaction slips, retailers must adapt to the new market. It’s clear they have their work cut out for them.”

Among internet retailers, no companies improved customer satisfaction during the pandemic, as the category tumbled nearly 5% overall.

Costco, Etsy, and Nordstrom tied for first place at 80, but it was nothing to get excited about. The first inched back 1%, while the latter two receded 2%.

Amazon had the most to lose. According to the data, the former online leader experienced big declines in site performance, merchandise variety, inventory, customer support, and shipping.

Walmart (down 1% to 73) and Sears (down 1% to 72) were the bottom two. Surprisingly, customers are more satisfied with Sears’ shipping and mobile app capabilities. But those gains weren’t enough to improve overall satisfaction.

L Brands slipped 1% to 81 yet maintains a slight lead. Despite losing ground, L Brands outpaces the competition in staff courtesy and inventory.

Sephora and Ulta Beauty tie for second place with an ACSI score of 80, followed by Cabela’s, which dips 1% to 79. Gap, TJX, and Abercrombie & Fitch are all down 1% to 78.

Five retailers posted scores of 77: AutoZone (unchanged), Michaels (unchanged), PetSmart (down 1%), Foot Locker (down 3%), and Bed Bath & Beyond (down 4%). They tied smaller specialty stores (down 3%).

Advance Auto Parts, Home Depot, and Lowe’s sat just below the industry average, each down 4% to 75. They met Burlington, which recedes 1%. Menards took the biggest tumble of the bunch, down 8% to 74, while GameStop remained at the bottom, down 4% to 72.

Costco took the top mark among department and discount stores, but its lead from before the pandemic dwindled, as it fell 2% to an ACSI score of 81. Costco improved for its mobile app quality and reliability; however, satisfaction with inventory fell sharply.

Dollar Tree tumbled 4% while Sears climbed 4% to meet at 74. Sears’ gain represents the biggest improvement of all retailers measured.

Big Lots held steady at 73. Fred Meyer retreated 3% to an ACSI score of 72. Walmart was stable at 71, as customers see improvement in checkout speed. Unfortunately, Walmart still rates lowest on this measure.

Coming in last was Dollar General, plummeting 4% to 70. Dollar General struggles the most when it comes to merchandise variety, inventory, and store layout.

Customer satisfaction with supermarkets was hit hard by COVID-19, as no grocers improved.

The top four grocers held steady: Trader Joe’s and Wegmans tied for first place at 84, followed by Publix and Costco at 83. Customers were increasingly satisfied with Costco’s checkout speed these past six months.

Texas-based grocer H-E-B climbed into a tie for first place in the 2019-2020 Retail report, but lost ground since the pandemic, falling 2% to 82.

After plummeting 8%, Albertsons Companies was alone at the bottom with a score of 69 – the first time a supermarket has scored in the 60s since 2015.

The effects of the pandemic on retail are especially pronounced in supermarkets. Aside from checkout speed, which remained steady at 76, all other customer experience benchmarks declined.

Keeping shelves stocked has been a major issue for the industry with inventory sinking 6% to 75. Customers aren’t seeing many sales and promotions, and they’re uninspired by the number of locations.

Customer satisfaction with health and personal care stores was steady at 76 over the last six months, as customers’ retailer of choice remains the same: smaller drug stores.

Despite slipping 1% to an ACSI score of 81, smaller drug stores led the industry once again. CVS moved into second place, climbing 1% to 78. Kroger, which slipped 1% to 77, was next, followed by Walmart, up 1% to 75. Walmart’s checkout speed improved substantially, but the retailer still trailed the rest of the industry for this measure.

Kmart, a Sears company, stumbled 1% to 74, just ahead of Walgreens, which slipped 3% to 73. Rite Aid and Albertsons sat in the industry cellar together, each sinking 4% to an ACSI score of 72.

For the most part, the customer experience for drug stores remained the same. Customers did feel the checkout process (up 1% to 77) was faster and mobile app reliability (up 2% to 83) was better. However, the industry’s ability to provide name brands has lessened (down 1% to 78).

The American Customer Satisfaction Index special COVID-19 retail study is based on interviews with 30,787 customers from April 1 to Sept. 30. 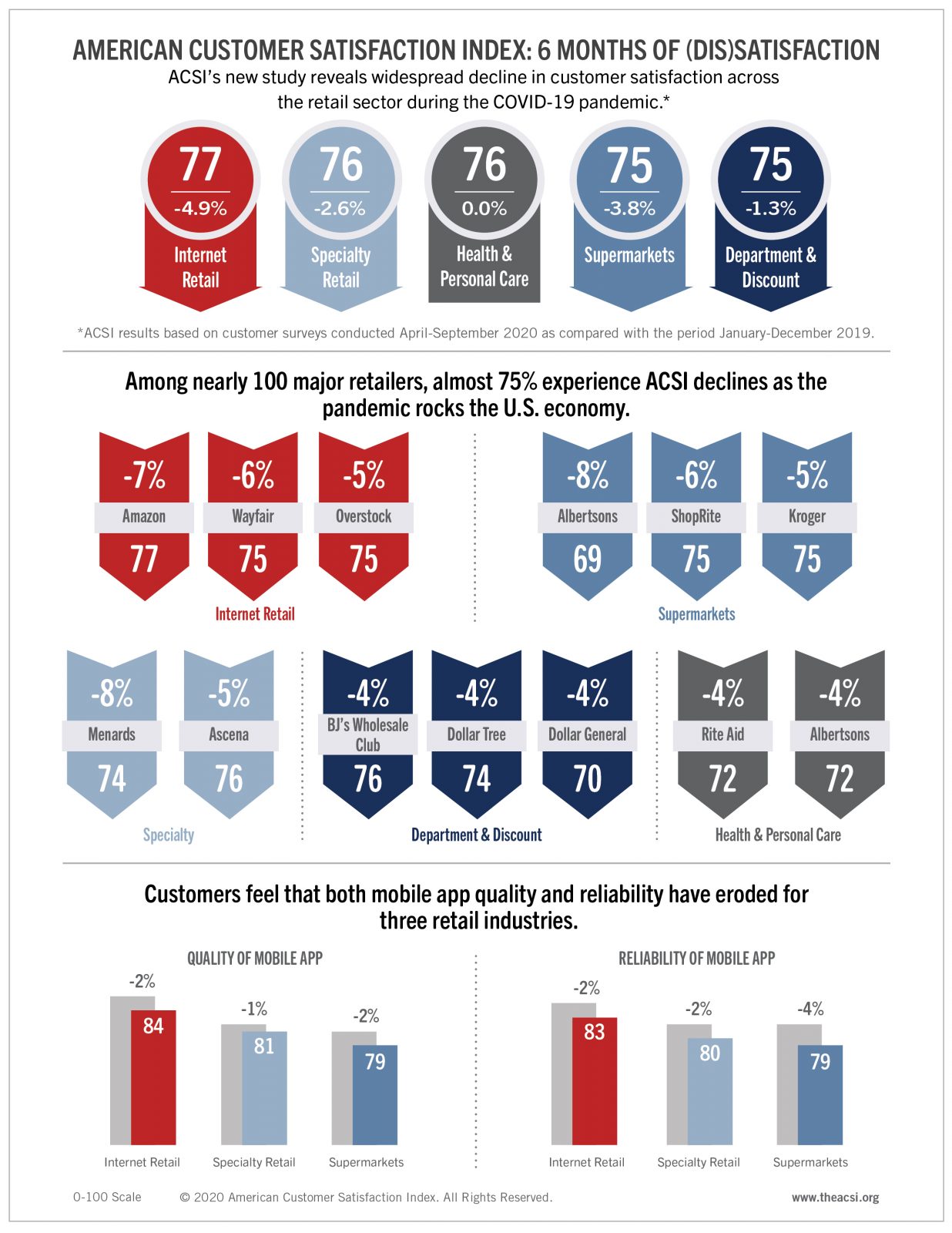