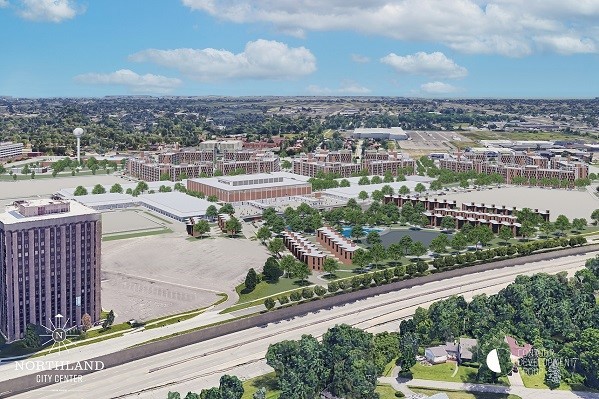 The projects supported today represent a total capital investment of nearly $700 million in communities across the state.

“Today’s actions show our continued focus on jumpstarting Michigan’s economy by supporting our residents, building on our state’s automotive strengths, and supporting vibrant communities across Michigan,” Whitmer said. “Through these significant investments, we can position the state for future prosperity and build back our economy stronger than ever before.”

The Means Logistics Park Redevelopment Project in Highland Park received $5.7 million in state tax capture for alleviation of brownfield conditions at the site, making it suitable for a $38 redevelopment project. The 20-acre site will include a new 446,500-square-foot speculative light industrial and warehouse distribution center. When the center is fully leased it will have the potential to employ up to 300 full-time equivalent workers.

Highland Park is supporting the project through the local portion of the brownfield work plan valued at $8.9 million. Highland Park is engaged with MEDC’s Redevelopment Ready Communities program.

Market analysis has repeatedly shown that move-in ready sites in the 200,000- to 500,000- square-foot range are in demand. Currently, there are no vacant facilities like the Means Logistics Park larger than 160,000 square feet available in metro Detroit.

The Former Northland Mall Redevelopment Project received $26 million in state tax capture to alleviate brownfield conditions at the site, paving the way for a $402.5 million redevelopment that will create 500 new jobs. (A rendering is above.)

As part of the project, the former J.L. Hudson Co. store located at the mall, once the largest branch department store in the world, will become the Hudson City Market, a food-and-goods marketplace that will be filled with dining and entertainment options. The project will also include public infrastructure improvements, including lighting, sidewalks, and more.

In addition to the state tax capture aid, the city is contributing the local portion of the work plan valued at $35.4 million. The project is at a priority redevelopment site for the city of Southfield, which is making a total commitment of approximately $49.3 million in direct support to the project. This consists of predevelopment activities totaling $22.8 million which includes previously completed eligible activities totaling $4.1 million. The city has also agreed to provide future funding for eligible activities completed by the developer estimated at approximately $20.1 million and $2.3 million in future city eligible activity costs. The city of Southfield is certified with MEDC’s Redevelopment Ready Communities (RRC) program.

Elsewhere, GL Rentals LLC received a $500,000 Michigan Community Revitalization Program performance-based grant to support a $1.9 million project that will see the construction of a two-story mixed-use building in downtown Zeeland. The project will be an addition to an existing building and when completed, will include commercial space on the first floor that will allow for the expansion of a longstanding small business, as well as residential apartment space on the second floor.

In Grayling, the MSF approved a $4.4 million Michigan Community Revitalization Program performance-based equity investment to support an $11.1 million project by Sawmill Lofts LLC to replace two vacant buildings in downtown Grayling with a new, five-story mixed-use development. The project will include 42 residential rental apartments including studios and one- and two-bedroom apartments, as well as commercial space on the first floor and will also include the improvement of public space through new sidewalks and improved streetscape features.

In 2015, the MSF supported the attraction of a new particleboard manufacturing plant for Arauco North America, which was expected to result in the creation of 250 new jobs for the area. The new jobs created a housing shortage to an area that was already experiencing an increased demand. This project will not only help revitalize Grayling’s residential rental market, it will also bring new density and walkability to the downtown and serve as a catalyst for future economic activity.

In addition, the Crawford County Brownfield Redevelopment Authority received MSF approval of $527,123 in state tax capture for the alleviation of brownfield conditions at the site. The city is supporting the project with the local portion of the brownfield work plan estimated at $756,266, as well as a 15-year Neighborhood Enterprise Zone tax abatement valued at approximately $955,027. The city also donated an adjacent parcel of property to provide parking space for future residential and commercial tenants. The city of Grayling is certified with MEDC’s Redevelopment Ready Communities program.

The MSF also approved a $1.25 million Michigan Community Revitalization Program performance-based grant to support the $7 million North Flint Food Market project, which will result in a new co-op urban grocery store development located at the corner of Pierson and Clio Roads on the north side of Flint. When completed, the project will include a full-service grocery store intended to provide reliable access to fresh foods to residents of the community. The project also addresses the food desert currently being experienced on the north end of Flint.

The city of Flint is providing $200,000 in Community Development Block Grant funds in support of the project. Flint is engaged with MEDC’s RRC program.

Ford’s $100 million investment will include the purchase and renovation of the existing building on the site to support product development and manufacturing process research related to vehicle battery applications. Approximately 200 full time engineers are expected to be located at Ion Park within 18 months of completion of renovation.

Since December 2019, Ford has announced nearly $2.5 billion in investment in Michigan, largely around electric and autonomous vehicle manufacturing. They also represent more than 3,700 new jobs for Michigan’s manufacturing workforce.

As part of Ford’s $30 billion investment in electrification by 2025, and a renewed commitment to making Michigan a centerpiece of it focus on EVs, the company also committed to assemble its all-new, all-electric Ford F-150 Lightning, with foreign and domestic parts, at the Rouge Electric Vehicle Center in Dearborn, adding 500 new jobs with the support of the Good Jobs for Michigan Program. Ford also repositioned its half-century-old Van Dyke Transmission Plant in May—renaming it the Van Dyke Electric Powertrain Center and expanding its production line to produce electric motors and electric transaxles for hybrid and fully electric vehicles, retaining a total of 225 Michigan jobs.

The COVID-19 pandemic exposed that broadband connectivity is critical in accessing telework opportunities, telehealth, and distance learning. The MEDC’s Broadband Infrastructure Mapping Project will create field-validated maps of Michigan’s broadband infrastructure assets located in public easements and availability capable of delivering high-speed connections. The maps will be useable by the Community Development Block Grant program, communities, regions, the state, and internet service providers as a first step in making informed decisions regarding the efficient expansion of broadband service throughout the state. The project will require highly skilled personnel to travel, record and map an estimated 65,000 road miles, including rural areas of the state. This project will be able to validate, document, and ultimately map all broadband infrastructure assets capable of delivering high-capacity broadband service.

“The projects approved by the MSF Board today reflect our commitment to taking a holistic, people-first approach to economic development while securing Michigan’s leadership in the industries that will drive our economy into the future,” said Quentin L. Messer, Jr., CEO of MEDC and President and Chair of the MSF Board. “Our economic momentum here in Michigan continues to gain speed as we build back an economy that is more diversified, resilient and equitable than ever before.”

For more about the MEDC, the MSF, and state economic development incentives and programs, visit www.michiganbusiness.com.