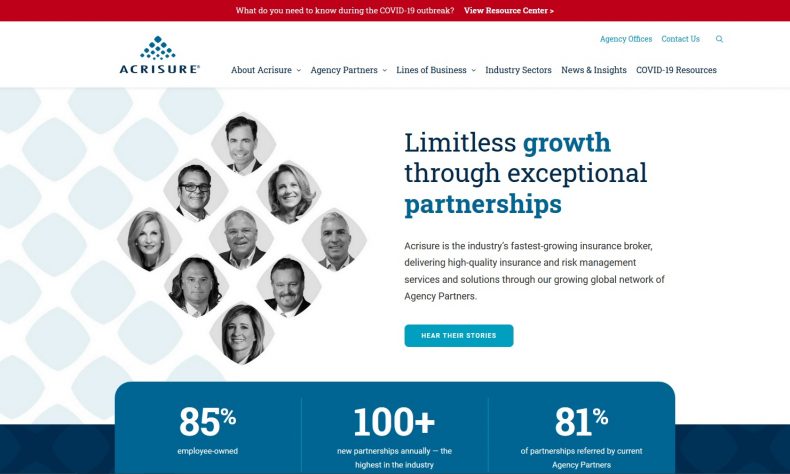 The deal, which was conducted as a stock-for-stock trade resulting in Tulco becoming a significant minority shareholder in Acrisure was announced by Greg Williams, co-founder, CEO and president of Acrisure, and Thomas Tull, chairman and CEO of Tulco.

The announcement builds on a successful year-long partnership between Acrisure and Tulco. In 2019, the two firms formed Altway Insurance, an AI-backed brokerage focused initially on individual health benefits. Since its launch, Altway has seen rapid success with 24 consecutive weeks of 10 percent or greater week-over-week growth.

“We’ve worked with the Tulco team for almost a year and our vision for Acrisure and the industry are completely aligned,” Williams said. “Tulco’s world-class talent and ability to apply AI and intelligent automation is immeasurable as it relates to meeting the needs of our clients and transforming our company. We’re very pleased to be working with the entire Tulco team as we take this transformational step with like-minded entrepreneurs. I’m excited about what we will create together.”

At Acrisure, Tull will be involved in the strategic direction of the company as the chairman of the new “Acrisure Technology Group” and will assist in attracting and retaining other key talent.

“A significant amount of capital has been deployed into insurtech, but we have a truly unique opportunity for scaled transformation as we layer AI into current processes,” Tull said. “Partnering with Acrisure over the last year and implementing the tech has given me the confidence and excitement that we will do things that are highly impactful. I look forward to helping Greg build the most forward leaning technology and advanced insurance brokerage in the world.”

“The insurance sector is ripe for transformation and combining Tulco’s market-proven AI and data science products with Acrisure will deliver insurtech at scale,” said Breyer. “Thomas (Tull) has a keen ability to fuse forward-thinking, entrepreneurial ideas with commercially driven businesses. Combining this capability with Greg (Williams) and the Acrisure team creates an opportunity to influence and shape an important and significant marketplace.”

From $650 million in annual revenue in 2017 to more than $2 billion today, Acrisure has seen record growth, completing over 500 acquisitions the past several years. Now a top 10 global broker, Acrisure is majority-owned by employees and has locations across six countries.