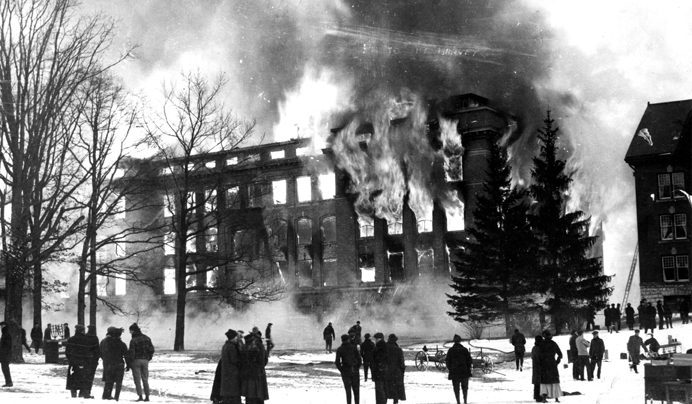 It is believed that the blaze began around 5 a.m. in the cement labs in the southeast corner of the building’s basement. There was no loss of life.

The fire quickly spread through the empty building and its engineering shops. The fire then leapt to the roof of Wells Hall, which was then a dormitory near the Engineering Building. Wells only sustained minor damage.

The 1916 MAC yearbook — back then called The Wolverine — noted the fire in this passage: “…the ruins had scarcely ceased smoking before a new schedule of classes … was formulated for the 400 engineering students. When sessions began on Monday morning … not a class was missed.”

The history of what happened next was shared in an MSU College of Engineering publication in spring 2008, written by Laura Luptowski Seeley.

Acting president at the time was Frank S. Kedzie, who took over leadership of MAC in September 1915 and served as president until 1921.

On April 25, 1916, The MAC Record reported: “The story goes that in the early days of MAC President Kedzie, his father, Dr. R. C. Kedzie, was in a position to do a great favor to the father of (automotive executive) Ransom E. Olds. These men were warm friends and their sons have continued this friendship. Hence Mr. Olds finds this a very opportune time to help Dr. Kedzie out of the first real worry of his college administration.”

R. E. Olds wrote a letter to President Kedzie dated April 29, 1916, confirming his intent to contribute $100,000 toward reconstruction of the Engineering Building.

The R. E. Olds Hall of Engineering was built on the old foundation of the former Engineering Building. Inside and out, it was a near replica of the original structure, with the only exception being the design of the windows near the top of the building.

Olds Hall was formally dedicated on June 1, 1917, along with the new engineering shops (“a two-story, fire-proof shop building,” located to the east of Olds Hall).

The MAC Record reported on June 5, 1917: “R. E. Olds was present in person at the dedication of R. E. Olds Hall and, in turning over the keys of the building to Engineering Dean George Bissel, said, ‘It is my observation that the students turned out of this college are better fitted on the average than those from any other college in the country.’”

Olds Hall served as the home for engineering for 45 years, until the growing college moved to its new building on Shaw Lane in 1962. Today, the College of Engineering serves 5,000 undergraduates and more than 600 graduate students. MSU constructed additions to the Shaw Lane building in 1989 and 1997.

The odds of MSU totally losing another academic building to a devastating fire have diminished in the past 100 years, said Venkatesh Kodur, professor of civil and environmental engineering.

“Since the 1916 fire, we have come a long way in tackling fire hazard,” Kodur said. “Continued research and development have reduced the adverse impact that fires cause to buildings and built infrastructure.”

Kodur said research advances have been spurred on, in part, by the devastating fires at the World Trade Center after the attacks of Sept. 11, 2001.

There’s ample evidence of MSU’s leadership in fire hazard mitigation. MSU was the first university in the United States to host the world’s leading international workshop on performance, protection, and strengthening of structures under extreme loading when it hosted Protect2015 last June. The international conference attracted 140 professionals from 30 countries who shared research and technology to improve safety. (The conference was established in 2007 in Canada and in subsequent years was held in Japan, Switzerland and India before coming to MSU.)

Much of that work is done in the MSU Center for Structural Fire Engineering and Diagnostics, located on Jolly Road, south of campus. MSU currently has two undergraduate, three master’s, and eight PhD students working at the lab.

“Our infrastructure around the world is aging at a rapid pace, yet our expectations of better performance are increasing,” Kodur said. “Our graduates are helping to reduce fire burden around the world.”