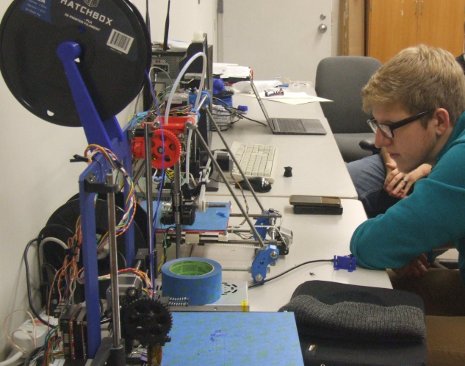 The members of the Open Source Hardware Enterprise at Michigan Technological University are using filament made from relatively uncommon poly-lactic acid plastic. A one-kilogram reel runs about $30. But now, thanks to a $25,000 Ford College Community Challenge grant, there may soon be cheaper, more readily available printer filament on campus and in the community. Wilder, Peoples and fellow team members Andrew Schaub and Peter Gorecki are using the grant to incorporate local recycling initiatives into the mix.

Or to put it in Yodaspeak: “Turn water bottles into 3-D printer filament, the grant will.”

Ford C3 grants from the Ford Motor Co. Fund, the philanthropic arm of Ford Motor Co., center on projects that bring to life the theme “Building Sustainable Communities.” In its eighth year, the program is awarding $250,000 for student-led projects that address urgent community needs in ways that are practical and possible to continue and build upon in years to come.

The Enterprise team’s winning plan: build a waste shredder, refine an existing RecycleBot  to accept No. 1 and 2 plastics, create the filament and sell it. It takes 20 milk jugs to produce about a kilogram
(2.2 pounds) of filament. The RecycleBot can make a kilogram of filament for less than $1.

The team, headed by Associate Professor Joshua Pearce, with Wilder as student leader, is partnering with the Upper Peninsula Recycling Coalition to create filament from common plastics like water bottles and milk jugs.

Like 3-D itself, the plan is multi-dimensional. Besides expanding the types of plastic that can be used for filament, the project will create a business model “scalable to whatever size you can handle,” Wilder said. “When I graduate I can build these wherever I end up. Or a country could use the plan.”

Both plastic types commonly used for 3-D printing, PLA and ABS, are categorized in the catchall No. 7 plastic category (that’s the number you find in the triangle symbol on plastic products). PLA is made of biodegradable cornstarch-based material, while ABS is oil-based. Both are malleable when heated and solidify when cooled, allowing for multiple processing. No. 1 plastic, or PET, is trickier, says Wilder. Used for containers — water bottles, cooking oil, peanut butter and the like — “PET is hard to get in useable form where you can actually make filament. You have to get it dry and get the temperature just right, or rather than plastic thread, you’ll get burned plastic and water.”

Pearce and his team have already had some success with No. 2 plastic, or HDPE, used for motor oil, shampoo, laundry detergent bottles and toys.

Both No. 1 and 2 plastics are familiar components of commercial and community recycling programs. But recycling programs aren’t common in Michigan’s Upper Peninsula — or other rural areas where efforts are hamstrung by transportation costs to faraway processing centers.

The team of four-year undergraduates will be presenting their findings at the coalition’s conference in late spring 2016.

“We are grateful to the Ford Motor Company Fund for supporting this project that will demonstrate how plastics that are recycled in our community can be converted locally into commercial products,” said Pete Cattelino, associate director of industry relations at Michigan Tech. “The university works very closely with Ford on automotive-related projects. It’s also great to have a project outside the automotive focus that will make a difference for the environment and our community.”

Previously Michigan Tech has received two C3 grants, both with Enterprise students in leadership roles. The 2009 effort provided free home-weatherization and energy audit services for low-income community elders. A 2011 award funded a partnership between the University and the cities of Hancock and Houghton to develop and launch a bus transit action plan.