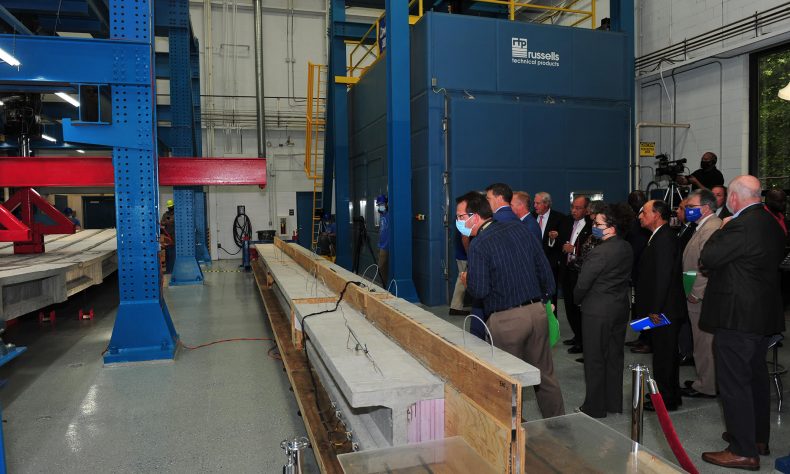 SOUTHFIELD—First there were a couple of cracks and pops, as hydraulic presses bore down with titanic force on a 41-foot-long section of test bridge. Then, a few ominous bangs. Finally, the test bridge collapsed with a resounding kaboom, sending small shards of concrete around Lawrence Technological University’s Center for Innovative Materials Research (CIMR).

Nevertheless, Nabil Grace, dean of the LTU College of Engineering, said of the test: “This is good news.”

That’s because it had taken more than 180,000 pounds of pressure in a narrow section of the bridge to break it—and the bridge had bowed downward nearly two feet before collapsing. The test showed again that LTU is a global leader in developing bridges made with pretensioned carbon fiber reinforced polymer (CFRP) strands instead of steel bars for reinforcement—producing longer-lasting bridges that cost less to maintain.

Video of the test is available at https://www.youtube.com/watch?v=z8uu0GW8Kc8.

MDOT Chief Bridge Engineer Matt Chynoweth, director of the MDOT’s Bureau of Bridges and Structures, said the situation in Monday’s test would never occur in real life, because that much weight would never be concentrated on that small a section of a bridge. But he said it’s a good demonstration of just how much reserve strength exists in the CFRP bridges in real-life situations.

LTU and the MDOT have been working on CFRP bridges for more than 20 years. The most recent collaboration has Grace as principal investigator on a Federal Highway Administration Pooled Funds Project that was awarded to four state Departments of Transportation—Michigan, Ohio, Maine, and North Carolina.

The ultimate aim of the project is to create bridges that last 100 years, at least 25 years longer than the current state of the art, and require far less maintenance over that life span. CFRP bridges are more expensive than conventional steel-reinforced concrete bridges up front, but the longer life span saves taxpayers money in the long run.

“The MDOT – LTU collaboration, with the assistance of our federal partners over the last 20 years, has established Michigan as a leader in advanced bridge infrastructure using innovative materials that can yield a remarkable 100-year service life,” LTU President Virinder Moudgil said.

“Our successful partnership with Lawrence Technological University has produced a number of innovations, and advances in longer-lasting bridges is among the highlights,” Ajegba said. “I’m especially pleased with the results of this ground-breaking research because it dovetails nicely with the intentions of President Biden and Governor Whitmer to ‘Build Back Better.’”

MDOT, as the lead in the Department of Transportation Pooled Funds Project, is seeking to build the first two bridges over I-94 in Detroit constructed with 0.7-inch CFRP pretensioned strands. Other DOTs in the Pooled Funds Project will evaluate the new bridge technology for deployment in their states as well.

The Bridge Model Test is also a precursor to advancing the development, testing and deployment of the 0.7-inch CFRP pretensioned strands and full integration and deployment of UHPC in the next few years. UHPC has been demonstrated in testing to have five times the strength of the concrete now used in bridge construction.

Completed in 2008, LTU’s CIMR is a 7,200-square-foot research facility with a 30-foot clearance height. It has a 25-ton crane to accommodate testing of structural components up to 100 feet long under various types of loads up to one million pounds. It also features a large-scale fire chamber with dynamic and static loading capabilities that can test structural components in temperatures up to 2,400°F, conditions like those of the 9/11 World Trade Center collapse.

CIMR also houses an environmental chamber spacious enough for a large vehicle, which can simulate harsh weather conditions such as blowing, freezing rain, sub-zero temperatures of  -80°F, or dry heat up to 180°F. Also in the CIMR: small environmental systems that measure the performance of materials when subjected to pulling, twisting and repeated loads, and a chamber that can subject materials to a variety of forces at temperatures ranging from -80°F to 600°F.