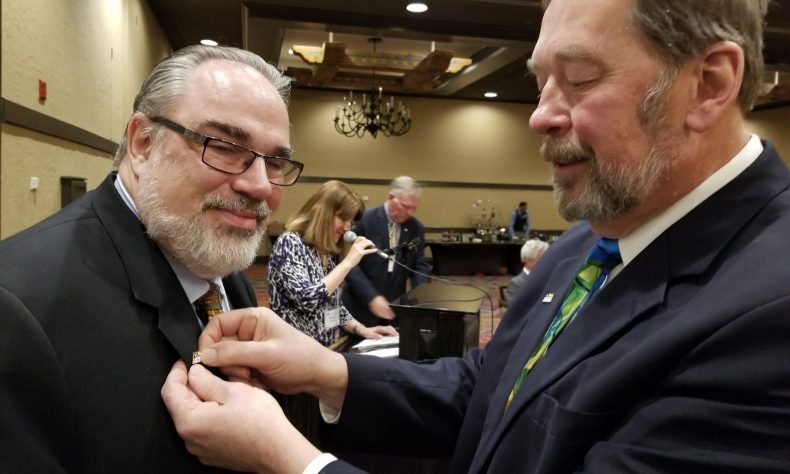 Hertlein, at left in the photo above, has a 40-year career in molds and tooling for the automotive, telecommunications, medical, and defense industries, including prototyping and production tools for precision parts. He is currently tooling manager at Letica Corp. in Rochester, a packaging manufacturer.

Hertlein started his career in 1976 at Armin Tool in Elgin, Ill. as an apprentice moldmaker, and trained at the Tool and Die Institute in Park Ridge, Ill. He was named Apprentice Moldmaker of the Year by the institute in 1979, when he received his journeyman moldmaker and mold designer certificates. He was also a part-time instructor in the plastics department at Elgin Community College until 1982.

Later, Hertlein graduated with honors from Kalamazoo Valley Community College with an associate’s degree in applied science, with a concentration in plastics. He also led the establishment of the Henry Tschappat Memorial Leadership Award Endowment at Ferris State University in 2004, named after the head of the plastics department at Elgin Community College, and the Frank Marra Memorial Endowment in 2005.

Hertlein was president of the Detroit Section of the Society of Plastics Engineers from 2016 to 2018 and is the section’s historian. He received the SPE’s Diamond Award in 2013 and its Outstanding Member award in 2018. He has been a member of SPE since 1981 and on the Detroit Section board since 2004. Hertlein also received the President’s Award from the Society of Manufacturing Engineers Plastics Composites and Coatings (PCC) Committee in 2011. He also 1serves on several other boards and committees and has raised significant funds for industry-related scholarships and educational programs as well.

In his free time, Hertlein enjoys collecting, updating, and maintaining his library, which comprises more than 8,000 textbooks and other documents relevant to the plastics engineering industry. He also loves supporting youth programs and strives to get young people interested in manufacturing, engineering, and moldmaking. In fact, he looks forward to attending the Makers Faire every year, as well as the Future City Competition hosted by the Engineering Society of Detroit, where he has served as a judge.

Hertlein also says one of his favorite experiences as an SPE Detroit Section member has been his participation in the annual Christmas Toy Distribution project which, for each of its 18 years, has provided between 60,000 to 80,000 plastic toys to needy children in partnership with American Plastic Toys Inc. As the Section’s 75th president, he says he was privileged to see the millionth toy donated.

The Plastics Pioneers Association is a group of plastics industry veterans that gives grants and scholarships to help students pursuing careers in plastics and materials science, provides educational materials on plastics to students at the K-12 level, and helps maintain the National Plastics Center at Syracuse University.