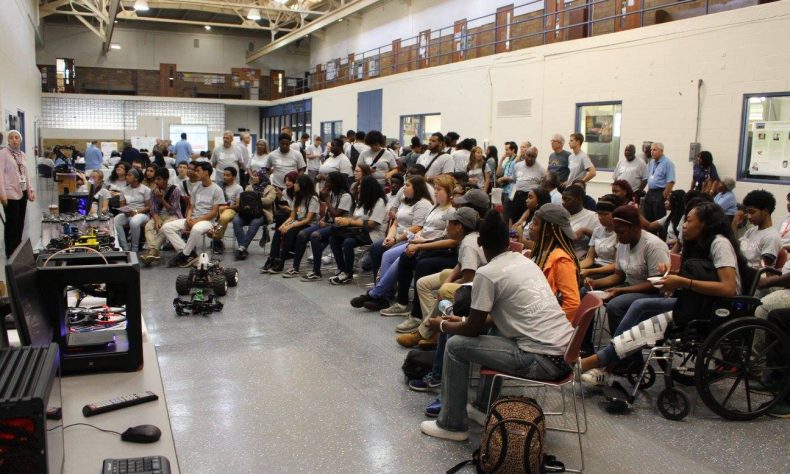 Students will spend the day at University of Detroit Mercy’s McNichols Campus on Thursday, July 19, engaging with faculty and learning important life skills as they prepare for college.

Student Corps, an extension of GM’s commitment to education, matches teams of 10 high school interns with retired GM executives and college interns to plan and execute community service projects, usually at schools and parks. The program hires 150 students from 15 high schools in Metro Detroit, Flint and Pontiac as General Motors interns and the students manage all aspects of their projects, from budgeting, planning and troubleshooting to meeting deadlines.

“We are committed to preparing students to tackle today’s challenges and become tomorrow’s leaders, by providing them with opportunities for life skills development and career preparation,” said Heidi Magyar, director of GM Corporate Giving. “With help from our GM retiree and college intern mentors, these high school students learn the value of teamwork, leadership, goal-setting and community service – lessons they’ll carry with them the rest of their lives.”

Student Corps high school interns are selected based on their leadership potential, dedication, determination and academics. In between physical tasks of cleaning, landscaping and painting, they attend workshops on managing money, building relationships and staying healthy and safe. They tour GM facilities and dealers.

One of the highlights of the program is the July 19 event at Detroit Mercy where students participate in workshops on student success, leadership and how to prepare for college.

Students wrap up their work in mid-August, then report on their projects – and lessons learned – to program champion Mark Reuss, GM executive vice president and president, Global Product Group and Cadillac, and his leadership team.

However, the program usually doesn’t end there: Most retirees stay connected to the students, checking in on grades, goals and personal challenges long after summer’s over.

Former GM Student Corps high school intern Brianne Hall is one example of the program coming full circle. Brianne participated in the program in 2014 as a high school student at East Detroit High School (now Eastpointe High School). Her first exposure to Detroit Mercy was through the program and after excelling in the Student Corps assignment and graduating from high school, she enrolled in the University in the fall of 2015. This summer, four years after her first involvement in the program, she is a rising senior in the nursing program and is returning to Student Corps as a college intern and mentor to help other students see their potential.

“I knew I wanted to come back to the GM Student Corps program because I want to be able to pass on some of the lessons that I learned to the next class of high school students. The program is a big reason why I am where I am today, attending and thriving at Detroit Mercy as a first-generation college student,” she said.

Matt Ybarra, who graduated from Detroit Mercy’s five-year MBA program in 2016, was hired by General Motors upon his graduation to serve as program coordinator for the GM Student Corps. He was initially selected as a GM Detroit Mercy college intern at River Rough High School in the first year of the GM Student Corps program. As the program coordinator, he works closely with Detroit Mercy administrators and faculty members to ensure that students receive a compelling experience that helps them gain a stronger understanding of the college experience.

“GM Student Corps helps create safer, more sustainable communities, but just as importantly, it changes lives,” Ybarra said. “It is so much more than just a ten-week program and it is truly special to see the ongoing mentoring relationships between the GM retirees, college interns and high school students. As someone who has developed greatly as a person and leader in my time with GM Student Corps and University of Detroit Mercy, I am very happy to be in a position at General Motors where I can give back by providing a valuable growth opportunity for students in Metro Detroit, Flint and Pontiac.”

Since its introduction in 2013, the GM Student Corps has provided nearly 800 summer internships, 57 school improvement projects and more than 59 park renovations.