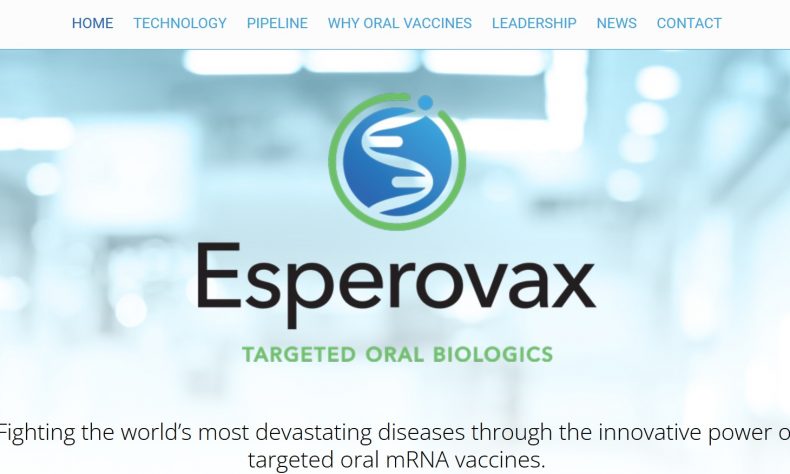 PLYMOUTH—Esperovax, the Plymouth developer of oral mRNA biologics, and Boston-based Ginkgo Bioworks (NYSE: DNA), which is building the leading platform for cell programming and biosecurity, today announced a partnership to develop circular RNAs (circRNAs) for a variety of therapeutic applications.

CircRNAs represent an emerging, powerful mechanism for delivering therapeutics and vaccines due to their protein-coding potential and improved stability in comparison to their linear mRNA counterparts. This partnership aims to further exploit circRNAs by developing a novel mechanism to facilitate RNA circularization specifically in colorectal cancer cells. This would result in extended expression of the toxic payload solely in cancer cells, reducing toxicity and resulting side effects from the death of normal cells. By combining omics datasets, computational approaches, and high-throughput screening capabilities, Ginkgo will design, build and screen large numbers of RNA designs that leverage and optimize Esperovax’s novel mechanism of cell-type specific circularization. Through its growing portfolio of programs in cell and gene therapy and RNA therapeutics, and recent acquisition of Circularis, Ginkgo is uniquely positioned to enable new solutions in these areas with circRNA.

“One of the most exciting things about being at Ginkgo is the opportunity to work together with startups like Esperovax in the early stages of development and collaborate on such incredible innovations as circular RNA technology,” said Narendra Maheshri, Head of Mammalian Foundry at Ginkgo Bioworks. “Building off of Esperovax’s novel mechanism for circularization, we’re thrilled to use our platform to further develop and optimize it to enable advancements in the therapeutics space – a core area of our work.”

“Given therapeutic developments in recent years, the idea of inducing a suicide gene therapy system in a tissue-specific manner has gained traction,” said Randy Wayne Schekman, a Nobel Prize recipient in Physiology or Medicine and Advisor at Esperovax. “As we aim to build off that traction with the ultimate goal of improving cancer patient outcomes, Ginkgo’s momentum and achievements in the therapeutics space made the company an essential and trusted team to partner with, giving us the confidence that we can eventually make this goal a reality.”

Esperovax was founded in 2018 to advance the development of its Egress RD oral vaccine platform, a transformative technology for delivering vaccines to the abundant population of immune cells in the gastrointestinal tract via a small oral capsule. The company’s proprietary platform is designed to enable a broad suite of oral vaccines that will be safe, elicit robust immunity, remain Esperovax has company laboratories located in Plymouth, Mich. and San Francisco, Calif. More at Esperovax.com.

Ginkgo Bioworks is developing biologics in the food and agriculture, pharmaceutical, and industrial chemical industries. Its biosecurity and public health unit, Concentric by Ginkgo, is building global infrastructure for biosecurity to empower governments, communities, and public health leaders to prevent, detect and respond to a wide variety of biological threats. For more information, visit ginkgobioworks.com and concentricbyginkgo.com.