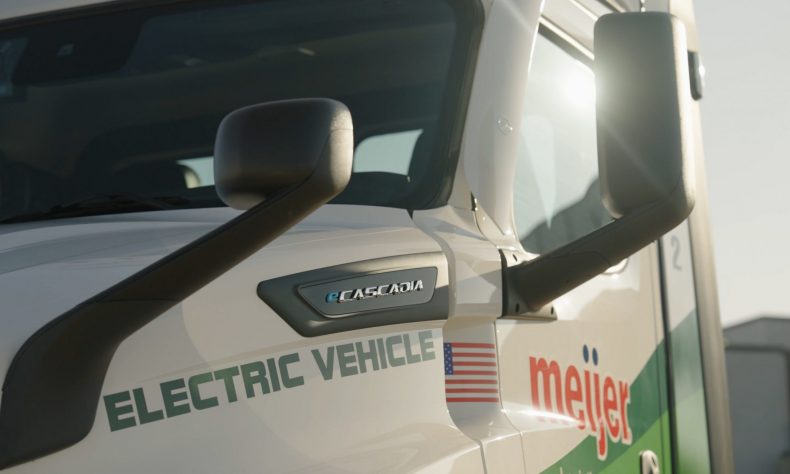 GRAND RAPIDS—Meijer Inc., the retail chain, announced that it had deployed two of the first all-electric tractor-trailer trucks outside California.

Meijer operates one of the largest fleets in Michigan with 250 tractor-trailer trucks. It is also the first retailer in the United States also the first nationwide to track the performance of the Freightliner eCascadia trucks in a cold weather environment as part of a grant from the U.S. Department of Energy.

“Our company’s earliest beginnings were marked by doing what’s right while keeping an eye toward innovation,” Meijer President and CEO Rick Keyes said in a news release. “That philosophy still guides us today and is exemplified by our company’s commitment to lessening our carbon footprint.”

Meijer received the battery electric trucks earlier this month and celebrated their delivery with a 44,136-pound donation of nonperishable food to Gleaners Community Food Bank in Detroit alongside Gov. Gretchen Whitmer and representatives from Meijer and Daimler Truck North America.

The two semis will operate out of the retailer’s Lansing Distribution Center, which is now equipped with specific charging infrastructure. They will make multiple deliveries daily to Meijer supercenters within a 200-mile trip range of the distribution center.

Meijer became a test fleet for Freightliner in 2009 and was selected in 2019 to test the manufacturer’s battery electric trucks. After a successful conclusion of testing and integration of customer feedback in the design and development process, Freightliner is now rolling out the battery electric truck to customers, including Meijer, which received the first delivery. The retailer’s trucks were partially funded by a grant to DTNA from the U.S. Department of Energy’s Vehicle Technologies Office geared toward the demonstration of battery electric commercial trucks under diverse climate conditions. Meijer will continue reviewing data daily for temperature impact on mileage, charge times, battery life optimization and driver comfort.

“Through this partnership, we can help accelerate the industry’s transformation to electrification by applying valuable insights from data collected and real-world applications in a cold climate environment and make a meaningful difference when it comes to reducing greenhouse gas emissions,” said Mike Graham, senior vice president of supply chain and manufacturing for Meijer.

Freightliner’s new battery electric eCascadia truck is the zero-emission version of the industry-leading Cascadia and is ideally suited for short-haul routes that allow for depot-based charging. Extensive development and rigorous testing through several prototypes and customer-tested trucks resulted in a powerful and efficient electric truck with multiple battery and drive axle options, providing a typical range of 230 miles, depending on vehicle configurations. With time being of the essence in this industry, a maximum battery capacity of almost 440 kWh can recharge 80 percent of the truck in approximately 90 minutes. To increase safety for traffic participants, especially in urban environments, the 82,000-pound Class 8 truck comes standard with active braking assist and debuts technology called Active Side Guard Assist, technology that engages at urban speeds of 12 mph or less to mitigate the truck from making a right turn when a moving cyclist or pedestrian is detected on the passenger side of the truck.

The new electric trucks are designed at Daimler Truck North America’s Detroit operations and built at its plant in Portland, Ore. Last year, the company announced plans for a $20 million investment in the Detroit manufacturing facility to serve as the North American source of Detroit ePowertrain components.

The food donation included peanut butter and canned vegetables, fruit and meat that Gleaners representatives said will be immensely helpful and immediately delivered to their clients this holiday season.