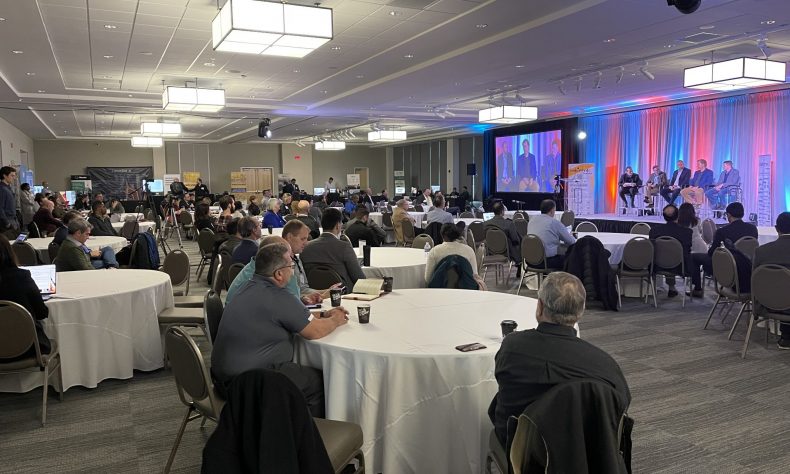 LATHRUP VILLAGE—Industry 4.0 is the catchall term for recent advances in computing power, data analysis, sensor technology, wireless data speed, and even battery technology—which combine to make it possible to use sensors and software to improve safety, quality, and productivity in manufacturing.

Officials with the MEDC and its Pure Michigan Business Connect program talked up their efforts to spread I4.0 technologies among Michigan manufacturers, including grants to implement I4.0 technologies ranging from a simple 3D printer to a huge data analysis project. Already, $2.2 million has been awarded to 95 companies in 40 of Michigan’s 83 counties.

Panel discussions zeroed in on I4.0 uses and benefits, including using machine vision and artificial intelligence to do a better job of detecting defects in manufactured goods. Speakers from companies like Lear, Magna, and GM also emphasized that they’re interested in investing in novel I4.0 technologies and startups.

Panelists also noted the impact that I4.0 technologies can have on a company’s carbon footprint. One panelist said that just by using “virtual twin” technology to lay out factory machines for maximum efficiency, a production center was able to cut its energy use by 30 percent.

And yes, robots are coming for jobs—but only the lousy ones. Panelists emphasized that robots are taking over jobs that are the so-called three D’s—dull, dirty, and dangerous.

Speaking of investing in I4.0 technologies, the event also featured a pitch competition for thousands in cash prizes. Five companies competed in two groups–early stage companies, those whose businesses are mostly still just an idea, and growth stage companies, established companies looking to get to the next stage.

Winning in the growth company competition and a $10,000 investment was Gildform, Detroit-based developers of a platform giving jewelry artists on-demand design technology, production services, and fulfillment of orders. The platform even offers financing to jewelry designers through a partnership with a fintech firm. The runner-up winner of a $5,000 investment was Elm Park Labs, a Royal Oak company developing software for virtual reality, augmented reality, and mixed reality for use in training on everything from operations to safety to service to maintenance.

Winning in the early stage competition and a $10,000 investment was LightSpeed Concepts, a Jackson-based company adapting 3D printing technology to the creation of sand molds used in the metalcasting industry. The company’s proprietary BlueNano sand binder makes the company’s offerings twice as fast as competitors at half the cost. The runner-up, winning a $5,000 investment, was Ulendo, a University of Michigan spinout that is developing software that makes 3D printers twice as fast by compensating for the vibration created by the printer.

Gildform also won the People’s Choice Award, a $5,000 prize awarded in a vote of attendees and sponsored by the patent law firm Ward Law.

For more information on the Industry 4.0 Accelerator, a project of the Centrepolis Accelerator and Lean Rocket Lab, visit https://www.i40accelerator.com.

About the Centrepolis Accelerator

The Centrepolis Accelerator, housed in Lawrence Technological University’s Enterprise Center in Southfield, is 6,300 square feet of business assistance for physical product developers and manufacturing companies, a unique niche among accelerators in Michigan. Since inception, the Centrepolis Accelerator has worked with over 375 companies, created over 360 new jobs, and commercialized over 150 products, resulting in $80 million in revenue or new investment. Clients include manufacturing startups and existing companies looking to move up to the next level in product innovation. Services include access to office space, co-working space, workshops, mentors, business planning services, and laboratories and equipment for product design and prototyping.

Lawrence Technological University, www.ltu.edu, is one of only 13 private, technological, comprehensive doctoral universities in the United States. Located in Southfield, Mich., LTU was founded in 1932, and offers more than 100 programs through its Colleges of Architecture and Design, Arts and Sciences, Business and Information Technology, and Engineering. PayScale lists Lawrence Tech among the nation’s top 11 percent of universities for alumni salaries. Forbes and The Wall Street Journal rank LTU among the nation’s top 10 percent. U.S. News and World Report lists it in the top tier of best in the Midwest colleges. Students benefit from small class sizes and a real-world, hands-on, “theory and practice” education with an emphasis on leadership. Activities on Lawrence Tech’s 107-acre campus include more than 60 student organizations and NAIA varsity sports.