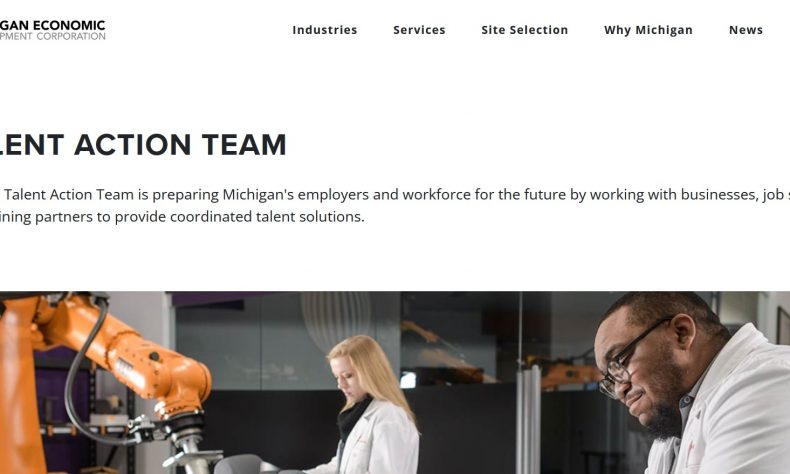 The action team will build on the governor’s efforts to onshore critical supply chains of semiconductors back to Michigan, creating good-paying jobs, and reducing delays and shortages.

“Michigan is committed to leading the future of the global semiconductor industry by investing in our workforce,” Whitmer said in a news release. “We have one of the most skilled, diverse, and abundant workforces in the nation, and by bringing together this new Talent Action Team of our partners in private industry and academia, we can build on our strengths and develop a strategy that will grow our economy for decades to come. The demand for domestic production of semiconductors will only grow, and Michigan is in a strong position to take full advantage of this generational opportunity. I will work with anyone to bring home supply chains, create jobs, and compete to win on a global scale.”

MEDC led the formation of the talent action team, collaborating with global microelectronics industry association SEMI, Michigan State University, the University of Michigan, and several community colleges. The team will work across the public sector, industry partners, and training institutions to identify a clear set of semiconductor-specific curricula and R&D investments, placing Michigan in a strong position to attract long-term, sustainable investments from semiconductor companies around the world.

“As the MEDC strives to make the state’s economy the fastest-growing, most equitable, and most resilient in the nation, developing the talent for Michigan’s tomorrow is a foundational piece of the puzzle,” said MEDC Executive Vice President and Chief Talent Solutions & Engagement Officer Kerry Ebersole Singh. “Michigan is already a leader in STEM talent and research, and by convening the Semiconductor Talent Action Team, we are building the model for a rich ecosystem of talent and innovation that positions our state to lead the future of the global semiconductor industry.”

The Semiconductor Talent Action Team is the second group MEDC has convened as part of its commitment to providing support to businesses looking to grow and expand in Michigan. Last summer, MEDC convened the Electric Vehicle and Mobility Talent Action Team to launch the first focused effort on supporting the talent transition in the electric vehicle and mobility sectors. The team’s goal is to train thousands of workers in the first year by delivering professional development programs that engage workers in improving their skills and competencies in line with in-demand roles. To date, the team has already made significant progress in fostering collaboration among private industry partners, universities and the state.

Michigan’s ability to support the semiconductor industry extends from its deep knowledge as a customer of the sector and as the global epicenter of the automotive industry. The state is home to nearly one-fifth of U.S. auto production—more than any other state in the nation—and has the greatest concentration of Original Equipment Manufacturers (OEM) in the country, with 26 having headquarters or technology centers in the state.

Michigan’s demonstrated leadership in advanced manufacturing within the semiconductor field is evident in companies with a longstanding presence in the state, such as Hemlock Semiconductor Operations, the largest producer of polysilicon in the U.S. HSC was chosen as the site of Whitmer’s CHIPS Act executive directive signing thanks to its key role in Michigan’s growing semiconductor industry. The President later signed the CHIPS and Science Act, which authorizes a $52 billion federal investment over the next five years in boosting domestic semiconductor manufacturing and provides a 25 percent tax credit for new or expanded facilities that make semiconductors or related equipment.

On Sept. 7, Hemlock announced plans to invest $375 million and create 170 jobs at its facilities in Saginaw County’s Thomas Township, further ensuring Hemlock’s long-term commitment to continue to produce the essential polysilicon for the semiconductor and solar industries in Michigan. The company broke ground on its expansion project in October.

HSC’s expansion in Michigan is just one of several investments and assets in the state to support its rapidly growing semiconductor industry, including:

The global shortage of semiconductor chips, exacerbated by the pandemic and supply chain constraints, has impacted people and industries across the country from auto manufacturing to consumer electronics, home appliances, medical devices, agriculture, defense and more. These shortages have resulted in reduced production and in some cases, idled plants, impacting more than 575,000 auto-related American jobs. In 2021, automakers in North America lost an estimated 2.2 million vehicles, equaling over 3,000 days of work.