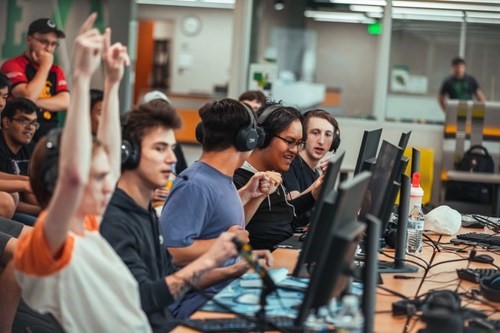 YPSILANTI—Eastern Michigan University and Los Angeles-based esports organization  Gen.G welcomed EMU students back to Ypsilanti with a series of campus kickoff events, project-based internships, and two Gen.G Foundation scholarships, on the heels of a summer tournament.

“Gen.G could not be more excited to continue expanding our programming with EMU,” said Arnold Hur, Gen.G CEO. “EMU has been our trusted partner as we look to enrich the academic experiences for student athletes studying and working hard to have an impact on the future of the esports and gaming industry.”

The start of the 2022-2023 academic year at EMU marks the second year of Eagles Gaming Club and Gen.G supporting student gaming on EMU’s campus. Students can expect events built by EMU students themselves. Additionally, there will be support for student athletes recognized by EMU Esports who will begin traveling to tournaments, competing virtually and representing EMU nationally in new jerseys showcasing their Eagle pride.

EMU and Gen.G will also look to commit to producing more events like the Summer Showdown throughout the year. In July 2022, the Summer Showdown tournament featured teams of students from eight local high schools and universities. The tournament ended with four gaming titles earned at in-person competitions hosted at the EMU REC/IM Center. The winning teams included University of Michigan-Flint for Rocket League, Michigan State University for Valorant, and University of Michigan-Ann Arbor for League of Legends. The Summer Showdown cements EMU’s position as a regional hub for gaming programming, building off of the success of Midwest Madness. Students in the region can expect additional similar tournaments throughout the school year.

The EMU REC/IM Center website will feature a redesigned gaming section, and students can check out upcoming gaming activities at this link. All events will be open to the public for general attendees and community members when possible.

In September, Gen.G announced two EMU students had been selected as recipients of the Gen.G Foundation Scholarship: Je’Naiya TimsIyad and Iyad Khattab. Each recipient received $10,000 to subsidize their tuition for this academic year and will have access to exclusive career and mentorship programming as members of the new scholarship class. Suho Chang, a student from the Gen.G Global Academy in Seoul will join Timslyad and Khattab as a student at EMU.

Now in its third year, the Gen.G Foundation Scholarship focuses on supporting women, people of color and low income students enrolled in a U.S. university or college who are interested in gaming, esports, entrepreneurship, journalism or content creation.