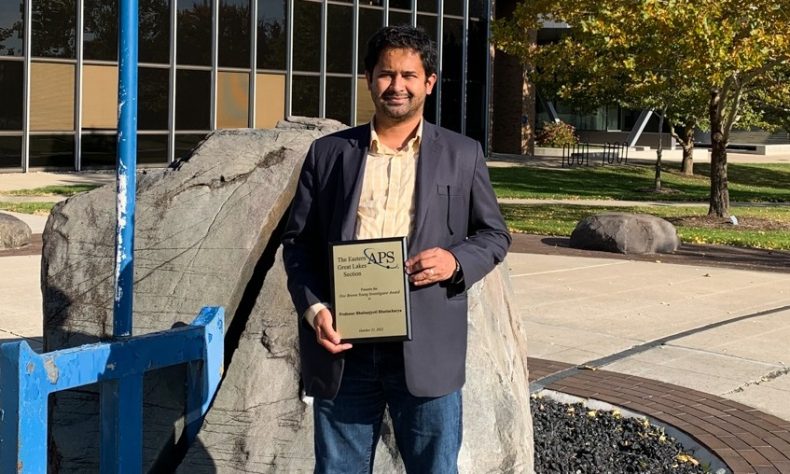 SOUTHFIELD—Bhubanjyoti Bhattacharya, associate professor of physics at Lawrence Technological University, has been named the inaugural winner of the new Doc Brown Young Investigator Award by the Eastern Great Lakes Section of the American Physical Society.

The presentation was made at the APS section’s recent fall meeting, which was held at Lawrence Tech.
The award recognizes a young investigator who is an APS member in their first six years of appointment as a senior lecturer, tenure-track faculty, or tenured faculty, who have at least one publication or conference presentation with undergraduate co-authors from their present institution.

Bhattacharya’s research focuses on what’s known as the baryon asymmetry puzzle—the fact that while there should be equal amounts of matter and antimatter in the universe according to the standard model of particle physics, the universe we see has a lot of matter and very little antimatter. The research takes the form of creating models to explain the difference, and ruling them out when they don’t work, narrowing the field of possible explanations. His research, which actively engages undergraduate students, has been supported by a $135,000 grant from the National Science Foundation. Bhattacharya has co-authored more than two dozen peer-reviewed scientific papers.

The award is named for Robert Brown, Distinguished University Professor and Institute Professor at Case Western Reserve University in Cleveland. Brown’s career spans more than 50 years making contributions to fundamental physics, including collaborating for more than 30 years with high-tech companies. He has published more than 200 papers and abstracts, and his doctoral students hold more than 150 patents. He has worked in radiation physics with a medical focus, including MRI, PET, and CT scanners.

Michael Crescimanno, Great Lakes Section awards committee chair and professor of physics at Youngstown State University, noted that the name of the award is tongue-in-cheek, because it evokes the “Doc Brown” character from the “Back to the Future” movies. But the real Dr. Brown at Case Western provided the endowment for the award “to recognize the research activity of undergraduates provided by pre-tenure educators.”

Of Bhattarcharya’s work, Crescimanno said: “He’s done exemplary work with undergraduates there (at LTU), and has contributed mightily to the life of the section in multiple ways, both in bringing students to the section and in administrative work to elicit excitement in the section. I am delighted to count him as a dear colleague.”

The Eastern Great Lakes Section of the American Physical Society, established in 1938, brings together physicists, other scientists and engineers from industry, government, and academia for topical symposia twice a year. Students and science teachers are particularly encouraged to attend and present papers at these symposia.

Lawrence Technological University is one of only 13 private, technological, comprehensive doctoral universities in the United States. Located in Southfield, Mich., LTU was founded in 1932, and offers more than 100 programs through its Colleges of Architecture and Design, Arts and Sciences, Business and Information Technology, and Engineering. PayScale lists Lawrence Tech among the nation’s top 11 percent of universities for alumni salaries. Forbes and The Wall Street Journal rank LTU among the nation’s top 10 percent. U.S. News and World Report lists it in the top tier of best in the Midwest colleges. Students benefit from small class sizes and a real-world, hands-on, “theory and practice” education with an emphasis on leadership. Activities on Lawrence Tech’s 107-acre campus include more than 60 student organizations and NAIA varsity sports.