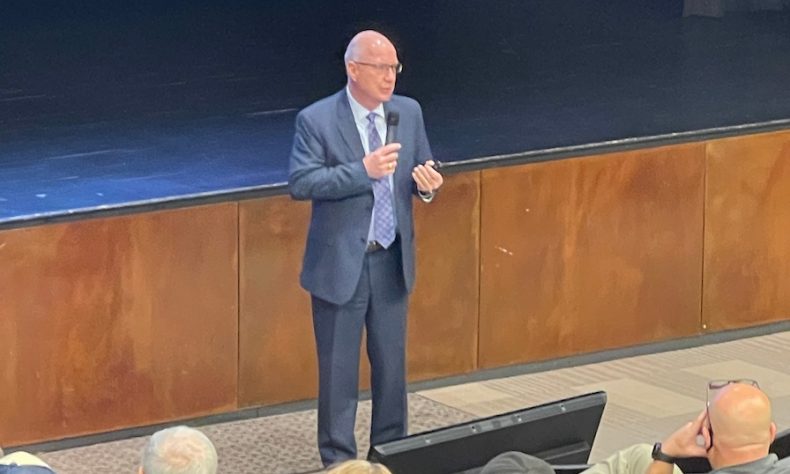 SOUTHFIELD—Kirk Steudle—former Michigan Department of Transportation director, Lawrence Technological University alumnus, and current member of the LTU Board of Trustees—was inducted this week into the Michigan Transportation Hall of Honor.

The Hall of Honor, a permanent display in the Van Wagoner Transportation Building in Lansing, MDOT’s headquarters, was established in 1971 to honor individuals who have made outstanding contributions to Michigan’s network of highways, roads, streets, transit systems, railroads, airports, and waterways. Members are elected by a committee representing a wide range of transportation industry organizations. With the inclusion of this year’s honorees, a total of 92 people has been inducted into the Hall of Honor.

Steudle graduated with a Bachelor of Science in civil engineering from LTU in 1987. That year, he started as a staff engineer for the Michigan Department of Transportation. He was promoted to Bay City Transportation Service Center Manager in 1997 and Deputy Region Engineer for the Metro Detroit Region in 1999. He was named MDOT Chief Deputy Director in 2003 and MDOT Director in 2006. (Steudle is pictured above speaking at an LTU event in 2021.)

Steudle left the MDOT in 2018 to become interim president of the American Center for Mobility. In 2019, he was named senior vice president of the Anaheim, Calif.-based transportation equipment manufacturer Econolite Group Inc. Last month, he left Econolite to establish the engineering consultancy Steudle Executive Group.

Steudle is focused on integrating technology into transportation. He is a noted expert in surface transportation, and a nationally recognized leader in the development of connected vehicle technology.  He served as chair for the Intelligent Transportation Society of America Board of Directors in 2015 and was inducted into the ITS World Congress Hall of Fame in 2016.

Steudle chaired the Transportation Research Board executive committee in 2014 and served as the 2011-12 president to the American Association of State Highway and Transportation Officials. He has been a board member of the Engineering Society of Detroit since 2009 and is ESD’s current president. He was named to the Lawrence Tech Board of Trustees in 2020.

Steudle was inducted into the LTU College of Engineering’s Hall of Fame in 2012, and serves on the college’s advisory board. He received the University’s highest honor, the Alumni Achievement Award, in 2008.