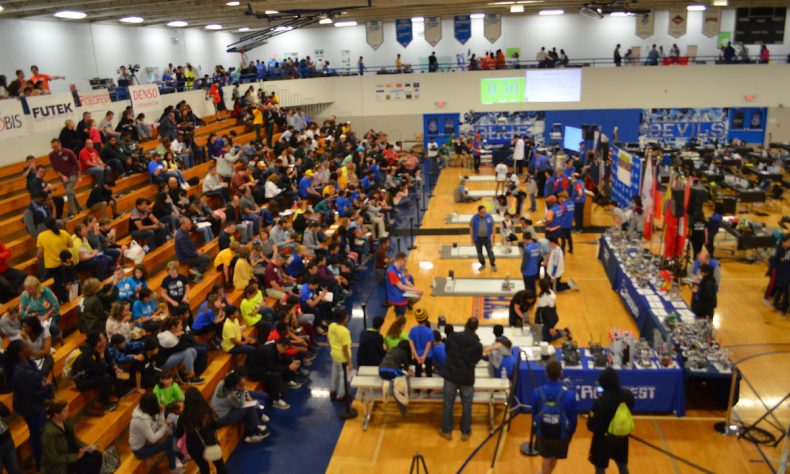 SOUTHFIELD—Lawrence Technological University will kick off the 24th season of its Robofest competition with a season-opening information meeting Thursday, Nov. 3.

The meeting runs from 7 to 8:30 p.m. in LTU’s Robofest Lab, Room J234 of the Taubman Complex (building 8 at www.ltu.edu/map). Free parking is nearby in Lots D or E. The meeting will also be webcast as a Zoom meeting for those unable to attend in person. To join, visit https://ltu.zoom.us/j/92854544370?pwd=NjIvMlFFTHhZbUw1cUlKc0RvR3I4dz09.

Robofest is a series of robotics competitions for students as young as 4th grade through college age. Robofest differs from other robotics competitions in that all robots competing are completely autonomous, controlled only by software developed by team members. Also, barriers to entry are low—the registration fee is only $75, and any robot kit and programming language can be used. A basic robot kit costs approximately $300. Financial aid is also available.

The most popular Robofest competition is the Game event, in which robots are designed and programmed to accomplish a specific task that changes each year of competition, with some mission requirements revealed to competitors just prior to the event.

The 2023 Game competition is ripped from the headlines: the Supply Chain Challenge. The supply chain is broken, the ports are jammed up, and the stores are empty!  Robots are programmed to clear obstacles, bring order to a port, and restock a store. Representing these challenges, robots must be programmed to move colored cans to a “port” area and stack them, move tennis balls to a “store” area, and remove obstacles—represented by flashlight batteries—from a competition table.

Other Robofest competitions include Exhibition, in which teams are free to develop any task and then build a robot to accomplish it; RoboArts, in which robots are created and programmed to perform in areas such as music and visual arts; RoboMed, in which teams create robots that perform tasks in healthcare and the life sciences; the Unknown Mission Challenge, in which mission tasks are totally unknown to teams until the day of competition; RoboParade, a parade of autonomous robot “floats;” and BottleSumo, in which robots re programmed to be the first to push a bottle or the other robot off a competition table.

Teams compete in the junior (grades 5-8), and senior (grades 9-12) divisions. For RoboMed only, there is also a college division. For RoboParade, competitors may be as young as fourth grade.

Qualifying events for the Robofest World Championships are scheduled to be held around the world from February through April 2023. There will be invitational qualifying events at LTU April 21 and 22, 2023. And the Robofest World Championships are scheduled to return to LTU for the first time since 2019 on May 11, 12, and 13, 2023. (A photo of that 2019 competition is above.) Robofest champions continued to be crowned during the pandemic in 2020, 2021, and 2022, in competitions held online.