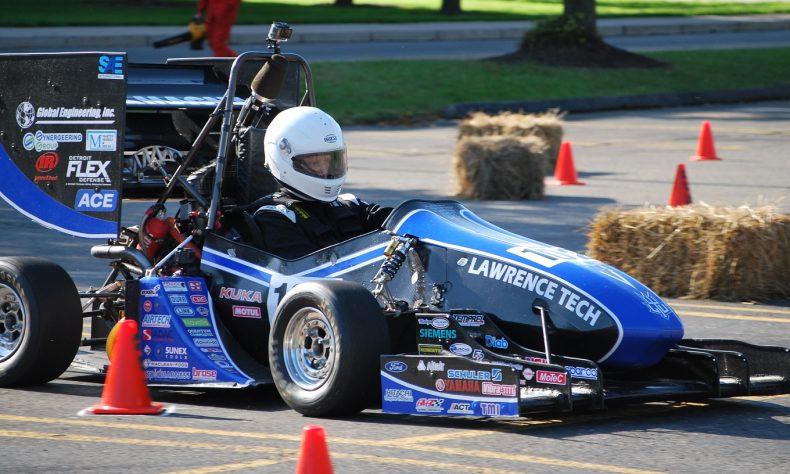 Established in 2009, LTU’s 13th Grand Prix will be held Saturday, Oct. 29 from 10 a.m. to 6 p.m. in the LTU parking lots along Northwestern Highway in Southfield (Parking Lot D at www.ltu.edu/map). The winner will receive a trophy for the fastest time trial.

The event has been held every year since 2009, except when it took the fall of 2020 off due to the pandemic.

The event is free and open to the public, with a Mexican-themed food truck, Los Dos Amigos, on site from 11 a.m. to 3 p.m. Sponsors of the event include 3DConnexion, Ingersoll Rand, Absopure, and Better Made.

LTU has a long history in Formula SAE, a student design and racing competition organized by SAE International (previously known as the Society of Automotive Engineers) and first held in 1979. The event is held in the spring at several sites around the country; LTU hosted the national event three times in the 1980s. Today, the finals for most Midwestern teams are held in June at Michigan International Speedway. Last year’s LTU team finished third in the nation out of 132 teams for its business presentation.

In Formula SAE, students conceive, design, fabricate, and compete in half-scale open-wheel race cars. There are restrictions on the car frame and engine so that the knowledge, creativity and imagination of the students are challenged. The cars are built with a team effort over a period of about nine months; in all, about 140 colleges and universities around the world participate. Judging criteria include engineering design; cost; performance on a skid pad; a braking test; an endurance test; and a team presentation. The end result is a great experience for young engineers to work on a meaningful project as a dedicated team. For more information on sponsoring Blue Devil Motorsports teams, visit https://www.ltu.edu/motorsports/.

SAE also sponsors other competitions—Baja SAE, the original SAE competition, which began with off-road vehicles in 1976; Formula Electric, teams that design and build all-electric racing cars; and SAE Aero Design, in which students design, build and fly an unmanned cargo aircraft. Still another competition, SAE Supermileage, for a maximum-MPG gasoline-powered car, was dropped after last year as the auto industry turns its attention to electric vehicles.