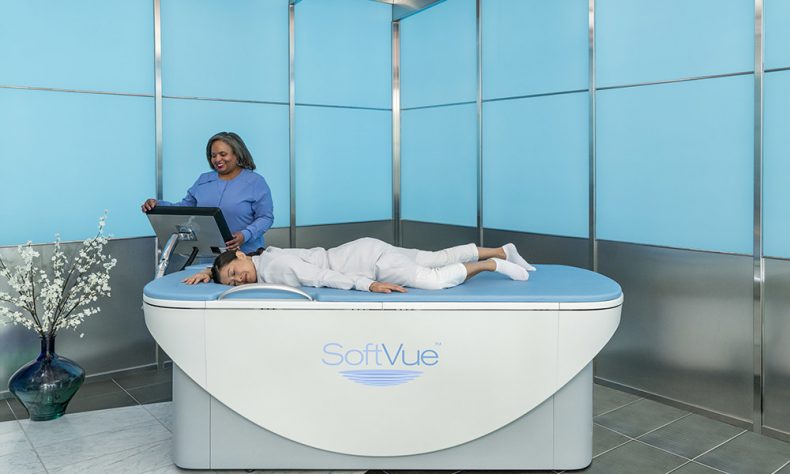 Developed by Novi-based Delphinus Medical Technologies, the new and advanced technology was designed to be the screening solution for women with dense breast tissue.

Dense breast tissue is common, affecting 40 percent of women and making them four times more likely to develop breast cancer. Compounding the increased risk, dense breast tissue typically appears as a solid white area on a mammogram, making it difficult to distinguish from masses and other serious abnormalities, missing roughly half of new cancer cases.

When paired with a screening mammogram, SoftVue has been shown to identify up to 20 percent more cancers, while also reducing false positives and decreasing unnecessary call-backs and biopsies.

Dedicated to the mission of leading in transformative cancer care, research and education, in 2009, Karmanos launched Delphinus Medical Technologies. The two organizations have since worked on various prototypes and conducted dozens of clinical trials to develop the state-of-the-art technology, demonstrating its ability to detect the presence of malignant and benign masses in women with dense breasts safely and more accurately.

SoftVue, used as an adjunct to mammography, allows women with dense breast tissue to have both cancer screenings during a single appointment. Taking approximately eight to 10 minutes, a SoftVue mammogram uses warm water and ultrasound technology to create a 3D image of the whole breast to detect the presence of cancer in its earliest stages—including masses in dense breast tissue often missed by mammography alone—while avoiding radiation exposure and compression, allowing the radiologist to make a more accurate diagnosis.

The SoftVue System will be available to patients at Karmanos Cancer Institute before the end of the year. To learn more about the technology, its benefits and request an appointment, visit karmanos.org/softvue.