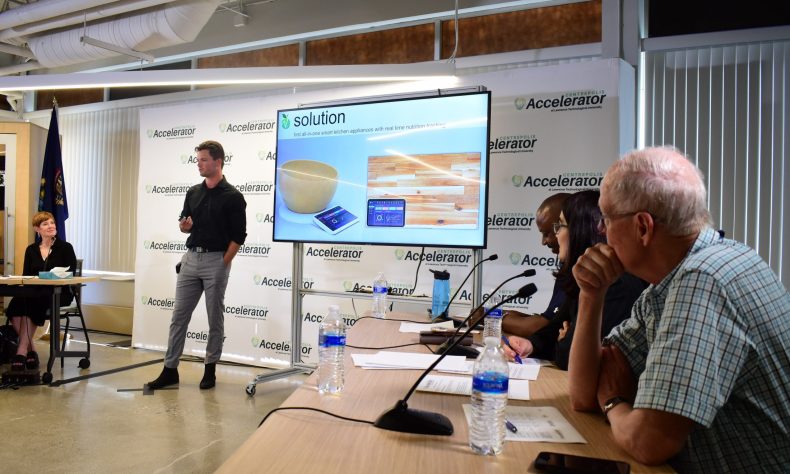 SOUTHFIELD—Ten promising companies pitched their novel products to judges and an online audience of more than 50 people in a “MicroMakers Pitch Event,” held Wednesday by the Centrepolis Accelerator at Lawrence Technological University.

The event featured startups creating innovative physical products that are being established by historically underrepresented populations in the City of Southfield and Wayne County.

Southfield-based LucyPop, founded by licensed nail technician Tomia Osby, has developed a patented, microfiber-based nail product that allows regular nail polish to last up to three weeks. Osby said the product uses sustainable materials that unlike a lot of nail products today won’t damage fingernails. The product is in a prelaunch with early adopters. Before becoming an entrepreneur, Osby studied public relations and computer science at DePaul University.

Southfield-based Carpet Puller, led by veteran carpeting contractor Woody Gneckow is developing an easier-to-use tool for the removal of old carpeting, where there hasn’t been a technological advance in the tools of the trade in 50 years. The patented product shows promise in massively reducing the time it takes to remove old carpet, reduce workplace injuries, and improve recycling rates. The company’s slogan: “Pull carpet, not muscles.”

Celsius founder Rakesh Katragadda has developed ionized water products with natural herbs that are shown to kill bacteria and viruses. Markets for the products include shampoos and other personal hygiene products, household and industrial cleaning, hydroponics, and pet care.

Madison Heights-based AptumBuild, led by longtime builders and auto engineers, has developed a modular structure system that allows buildings to be built quickly and inexpensively, with no nails or screws and no sawing required, by aligning and clicking panels together. Founder and CEO Bill Schofield said the structures offer good insulation and are tested in 150-mph winds. The initial markets for the structures are recreational and park homes, with eventual inroads planned into disaster relief and affordable housing. In only four months, the company attracted $3.1 million in orders. The cost of the buildings? Just $40 a square foot.

Livonia-based Wareologie first developed Buttons2Button, a magnetic system for fastening buttons for people with limited dexterity. Now, founder Gina Adams said, the company has developed a portable parallel bar system for use in physical therapy. Developed through a contract with the Department of Veterans Affairs, the patent-pending unit replaces permanent installations that can’t be moved and today’s flimsy and unsafe portable units. Adams said the system will allow patients to access therapy sooner, regain mobility faster, and be discharged from the hospital earlier. The units will be sold direct to hospitals as well as to the wholesale market through medical device companies.

The winner of a $5,000 People’s Choice Award—sponsored by Ward Law, an intellectual property law firm with offices in Southfield and Tiffin, Ohio—was VersaWare. Developed by a group of former Divison I college athletes, VersaWare is developing a nutritional device that consists of a bowl and a cutting board with built-in scales and a small tablet computer that attaches to them—allowing users to easily calculate the precise nutritional value of every meal. The product replaces apps that require much data entry in spreadsheets. Co-founder Jacob Lindberg said the product already has $125,000 in preorders. It’ll be pitched first to the 1.2 million Americans who “religiously track every single thing that they put into their body.”

Other participating companies were:

The event also featured presentations from Centrepolis Accelerator experts-in-residence and a conversation on the entrepreneurial journey with Akeel.

Centrepolis Accelerator, launched in 2019 by LTU and the City of Southfield, provides funding, mentoring, expertise, and services to manufacturing startups and established small manufacturing enterprises, one of the nation’s few business accelerators concentrating on physical products rather than software or services. It has helped commercialize hundreds of new products and has more than 300 clients. The Accelerator has 6,000 square feet of coworking space and a high-tech product prototyping lab on LTU’s campus with 3D printers, metalworking, and virtual and augmented reality equipment. The Accelerator has a focus on advanced manufacturing technologies; cleantech products, those that reduce emissions and fuel consumption, and which avoid or help clean up pollution; circular economy products, which boost the use of recycled and upcycled materials; and companies owned by historically underrepresented populations. More at www.centrepolisaccelerator.com.

Lawrence Technological University is one of only 13 private, technological, comprehensive doctoral universities in the United States. Located in Southfield, LTU was founded in 1932, and offers more than 100 programs through its Colleges of Architecture and Design, Arts and Sciences, Business and Information Technology, and Engineering. PayScale lists LTU among the nation’s top 11 percent of universities for alumni salaries. Forbes and The Wall Street Journal rank LTU among the nation’s top 10 percent. U.S. News and World Report lists it in the top tier of best in the Midwest colleges. Students benefit from small class sizes and a real-world, hands-on, “theory and practice” education with an emphasis on leadership. Activities on Lawrence Tech’s 107-acre campus include over 60 student organizations and NAIA varsity sports.