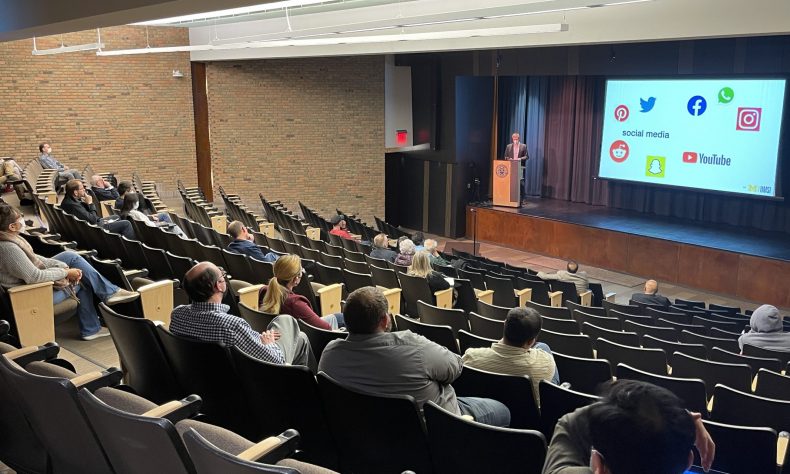 Only if we let it, according to a tech privacy expert who spoke Tuesday at Lawrence Technological University.

Florian Schaub, assistant professor at the University of Michigan’s School of Information, presented a sobering look at just how much information tech companies collect about all of us. He spoke in LTU’s annual Walker L. Cisler Lecture, the first held in person since 2019.

“Google holistically can follow you from website to website and paint a very detailed picture of who you are,” Florian said, in explaining technologies like Google Analytics. And then there’s a whole industry of data brokers that most people have never heard of, companies that buy and sell detailed profiles of individuals picked up by the websites and apps that untold millions use on their smartphones and computers every day. Those phones track our every move with location technologies like GPS.

The risks of all that information about all of us? Unwanted disclosure of intimate information, surveillance by government officials who may have authoritarian leanings, and what Schaub called “absence of opportunity…You may never know that you didn’t get that job because an algorithm picked up a social media post.”

And it can mean actual physical danger, he added.

“You can pay a bounty hunter $300 to track a phone,” Schaub said. “If the police use it to catch a criminal, great. Not so great if it’s an abusive spouse.”

Figuring out just what information companies and apps are collecting can be an arduous process. A 2008 study found that the average person would spend more than 240 hours a year to actually read all the privacy policies they face, and things have only gotten worse in the 14 years since. In 2019, the New York Times found Facebook’s privacy policy was almost as difficult to read as physicist Stephen Hawking’s explanation of the origins of the universe, “A Brief History of Time.” Privacy policies, he said, “are written by corporate lawyers for other lawyers and regulators, and the consumer is not being informed by those policies.”

Schaub said people express concern about a lack of privacy in surveys, but seem resigned and do little about it, “because they like using the technology.”

However, Schaub also said privacy issues are increasingly in the spotlight, “so there is hope.” The European Union, Brazil, California and Virginia have all passed tougher online privacy protection laws, and some companies are actually “designing for privacy” as a feature they can offer consumers. That starts with the privacy information tech companies provide, making sure that information is relevant, understandable, and actionable.

Schaub said he personally surfs the web with an ad blocker, and turns off location tracking, targeting, and data sharing in apps. And, he said, he at least skims privacy policies. As for websites and apps that ask for personal information, he said people should ask why, and if they’re concerned about revealing too much, provide fake information. As for social media, he said, “think before you post.”

A recording of the lecture is available on LTU’s YouTube channel at https://www.youtube.com/watch?v=-5PVyopwPFk.

LTU’s annual Walker L. Cisler Lecture is dedicated to the improvement of science education, and is generously supported by the Birmingham-based Holley Foundation in Cisler’s memory.

Well known for his leadership of the Detroit Edison Co. from 1954 to 1971, Walker L. Cisler, 1897-1994, enjoyed a career that spanned a lifetime of personal, professional, civic, and business accomplishments. As an international ambassador for the American electric utility industry, he worked closely with heads of state both here and abroad. As a tireless, dedicated humanitarian, he strived to improve the quality of life for people everywhere. Included in his resume: the rebuilding of the electric grid across Europe after World War II.