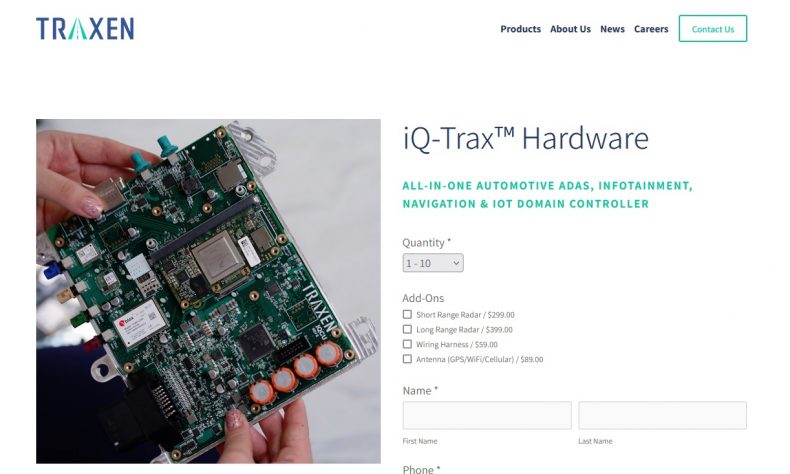 PLYMOUTH—Traxen, the Plymouth-based automated driver assistance technology provider, announced it was awarded a contract by United Road Services to officially launch production of its iQ-Pilot, an advanced driver-assistance system for Class 8 traditional, hybrid and electric commercial trucks that can reduce fuel consumption by an average of 10% annually.

“United Road is a technology-solutions driven company, so we welcomed the opportunity to work with Traxen,” United Road COO Jason Walker said. “We have seen significant benefits with the addition of iQ-Pilot to our tractors. Besides the significant fuel savings, iQ-Pilot helped reduce our carbon emissions and improve safety in ways not currently realized in the auto hauler segment.”

The iQ-Pilot’s average of 10% improvement in diesel fuel consumption in the U.S. equates to an annual reduction of five billion gallons of fuel or 50 million metric tons of CO2 emissions. This also equates to an average potential cost savings of $6,000 per year on trucks currently in operation.

Beyond fuel savings and emissions reductions, the iQ-Pilot, formerly known as iQ-Cruise, improves safety and drivability while significantly reducing maintenance costs for the remaining life of a truck.

“During the trial phase, the United Road team’s use of our intuitive technology averaged significantly higher than the industry average utilization of basic Adaptive Cruise Control,” Traxen founder and CEO Ali Maleki said. “Some drivers utilized the system close to 80%. And in our test fleet of three tractors, we averaged well over 90% utilization and averaged fuel economy increases of 10%. We are excited to extend our relationship with the United Road team and have them fully realize the potential of our iQ-Pilot.”

Because iQ-Pilot uses artificial intelligence (AI) to control the speed of the vehicle based on the factors it regularly monitors, the driver’s primary responsibility is focused on steering. Non-intrusive alerts via Traxen’s user-friendly interface helps keep drivers alert and informed. Human error and fatigue are vastly reduced through the use of this intuitive technology.

“Many routes driven are continually repeated,” Maleki said. “Each time iQ-Pilot covers a route it navigates that route more efficiently. Improvements realized are then shared with the rest of the fleet.”

Traxen has already begun installing units for United Road and anticipates full installation will be completed within the next 12-18 months.

For more information about the technology or Traxen’s pilot program, visit https://www.traxen.com/iq-pilot-system or email info@traxen.ai.

Founded in 1997, Plymouth-based United Road has operating terminals across the U.S. and Canada, the company has over 1,700 employees and operates an integrated national network that includes a total of 2,500 company-owned and independent contractor units as well as 15,000  units of third-party vehicle carriers. For more information, visit www.unitedroad.com.