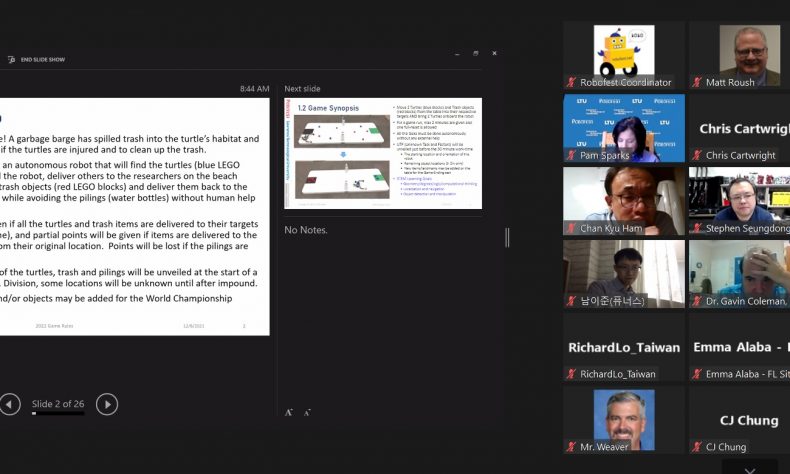 SOUTHFIELD—Lawrence Technological University’s Robofest robotics competition will return to in-person events for its 2022 competition season, leading up to the Robofest World Championships to be held on LTU’s Southfield campus May 12-14, 2022.

Robofest kicked off its 23rd annual season Wednesday, Dec. 8 in a Zoom call with teachers, students, and volunteers from around the world.

All Robofest robots must be completely autonomous in accomplishing their tasks, and no adult assistance is permitted in competitions. Robofest is an affordable robotics competition, with a $75 entry fee and robot kits starting at about $400.

Robofest will feature seven different competitions for 2022. The most popular, the Robofest Game, changes each year. This year’s challenge is called OceanBots. Robots must rescue objects representing “turtles” and place them in one area on a game table, while moving other objects representing “trash” to a different location. They must also place two of the “turtles” onboard the robot, and maneuver around “pilings” placed on the game table.

Other competitions will include:

Team registration begins Dec. 17. Maximum team size is three for BottleSumo, four for the Unknown Mission Challenge, and five for all other events. Regional competitions will be held around the world in the early months of 2022, with winners advancing to the world championships at LTU. There will also be a second-chance competition at LTU in April to qualify for the world championships. Online competition options are also available. Students compete in junior (grades 5-8) and senior (grades 9-12) categories, except for RoboMed, which also has a college division.

Robofest participants are eligible for a $3,000-a-year, four-year scholarship to LTU.

LTU computer science professor CJ Chung established Robofest in 1999 to foster interest and excitement in computer science and, more broadly, education and careers in science, technology, engineering, the arts, and mathematics—the STEAM disciplines. LTU mathematics professor Christopher Cartwright is now Robofest director, and LTU has hired three employees to manage the competition, demonstrating the University’s commitment to K-12 STEAM education. LTU has also hired four part-time student assistants for the 2022 competition season. There are also many volunteer opportunities for educators or those in STEAM careers. More than 30,000 students worldwide have competed in Robofest since 1999.

For more information, visit the Get Involved tab at www.robofest.net.