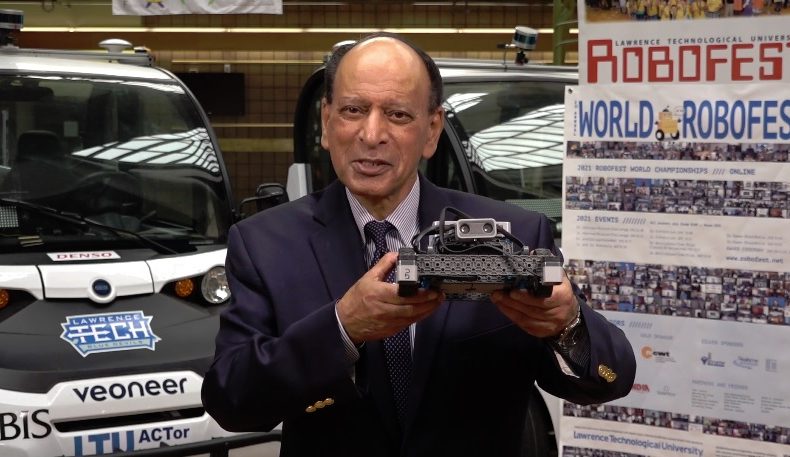 The winners were announced in a global online awards ceremony Saturday.

In the fun BottleSumo Time Trial competition, in which teams try to push a number of bottles off a table in the fastest time, the Senior Classic winner was Chingshin Academy in Taipei, Taiwan. The Senior Unlimited winner was Team Cobra from St. Paul’s School in Hong Kong. The junior winner was Arabots Chancla from Arabots Robotics in Toluca, Mexico.

“The level of competition for 2021 was simply fantastic, and we’re proud of all the teams that participated this year despite the challenges of the pandemic,” said Christopher Cartwright, Robofest director, a professor of mathematics and computer science at LTU.

Lawrence Tech computer science professor C.J. Chung created Robofest in 1999 as a means of letting students learn about robotics—and the crucial role software development plays in controlling robots. Unlike other robotics competitions, the costs of Robofest are low, with a $75 entrance fee and a robot kit costing less than $400 required to compete.

Robofest is tentatively planning a return to in-person competitions for 2022, beginning in February, with a world championship weekend of various events May 12-14, 2022 at Lawrence Tech’s Southfield campus.

Lawrence Technological University, www.ltu.edu, is a private university founded in 1932 that offers more than 100 programs through the doctoral level in its Colleges of Architecture and Design, Arts and Sciences, Business and Information Technology, and Engineering. PayScale lists Lawrence Tech among the nation’s top 11 percent of universities for the salaries of its graduates, and U.S. News and World Report lists it in the top tier of best Midwestern universities. Students benefit from small class sizes and a real-world, hands-on, “theory and practice” education with an emphasis on leadership. Activities on Lawrence Tech’s 107-acre campus include more than 100 student organizations and NAIA varsity sports.