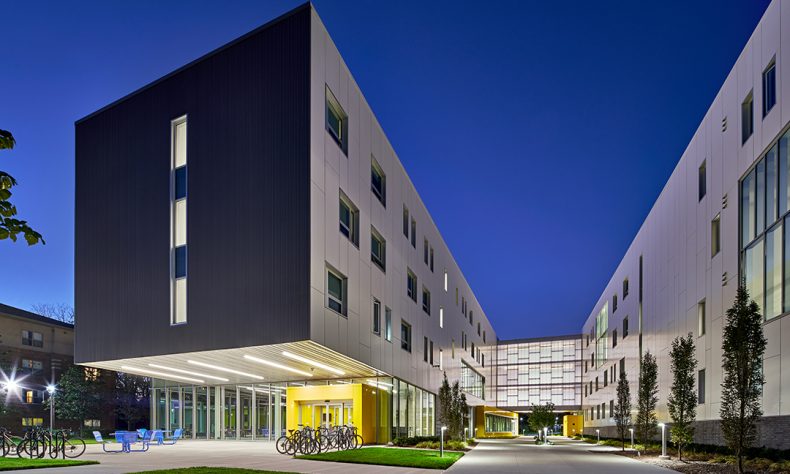 SOUTHFIELD—Lawrence Technological University’s East Residence Hall has been named a winner in the 2021 Architectural Honor Awards of AIA Detroit, the local chapter of the American Institute of Architects.

The building was designed by INFORM Studio, a Northville architectural firm founded by LTU alumni. Members of AIA San Diego served as the awards jury.

The judges said of the building: “Student housing is bound by tight constraints of budget, high density, and context. The jury appreciated that great care was given to connection and integration; linkages between residence halls, the campus, and surroundings will serve students well as a catalyst for pedestrian activity, spontaneous interactions, and a sense of community.”

Judges noted the building was part of LTU’s continuing transformation from a commuter school to a residential university. They said the building also connects LTU’s northern and southern campus areas, while offering students a welcoming home that gives them a sense of place, identity, and community. According to the AIA awards page, “Today LTU leverages the residence hall as a recruiting tool, and it’s considered directly responsible for the increase in international student enrollment and a catalyst for pedestrian activity.”

Judges also noted the residence hall’s prominent first-floor fitness center and its expansive use of glass to bring the outdoors indoors, moves designed to improve students’ health and wellness.

The awards page also noted that the design and build team used computational design technology to lay out the building, creating an “efficient design response, allowing the project to finish ahead of schedule and under budget.”

Said LTU President Virinder Moudgil: “We are honored to be recognized by the AIA for our newest residence hall, a building that combines sustainability features, a striking, modern appearance, and a sense of true community and belonging for our students.”

Added Eric Klooster, director of architecture at INFORM Studio: “We want to congratulate LTU on their new residence hall, a result of their ongoing vision to improve student life. It was important to us that we heard the needs of both the university and the student body, as this enabled us to design a central hub that will anchor the campus community now and in the future.”