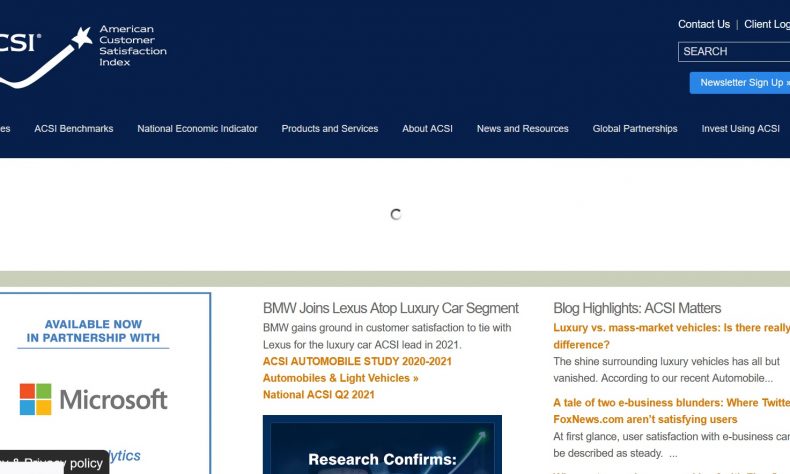 ANN ARBOR—Customer satisfaction with the auto industry is stuck in neutral.

Overall customer satisfaction with automobiles and light vehicles is unchanged with a score of 78 out of 100, according to the American Customer Satisfaction Index Automobile Study 2020-2021.

European manufacturers maintained their lead over Asian and U.S. cars with a steady ACSI score of 79. Japanese and Korean manufacturers are next at an unchanged 78, while U.S. automakers improved for the first time in five years, gaining 1 point to 77.

Among domestic manufacturers, Ford rebounded 1% to 77, tying GM, which was unchanged. Stellantis (which comprises the Chrysler, Dodge, Jeep, and Ram nameplates) sat in third place, down 1% to 76.

Satisfaction with the mass-market segment was stable with an ACSI score of 77. Luxury nameplates continue to outpace mass-market vehicles; however, that lead is dwindling following a 1% dip to 78.

“Over the last few years, luxury automakers’ satisfaction lead over mass-market manufacturers has been slowly eroding. That gap is now almost nonexistent,” says David VanAmburg, managing director at ACSI. “In terms of style points and cool factor, luxury vehicles may still have the edge, but if you remove all the bells and whistles, the two are more similar than not.”

Honda surged into first place after climbing 4% to an ACSI score of 82. Subaru was second, up 3% to 81. After a brief stint at the top of the category last year, Ram finished third with a steady score of 80.

After drastic drops, two nameplates brought up the rear. Mitsubishi plummeted 8% to 71, while last-place Chrysler stumbled 4% to an ACSI score of 70.

Among mass-market vehicles, customers remained the most pleased with vehicle safety (82). They also give the category high marks for dependability (81), driving performance (81), and vehicle exteriors (81). However, the former two benchmarks each decreased 1% year over year, while the latter is unchanged.

Drivers were less happy with the technology (77) of mass-market vehicles this year. Gas mileage and warranties rated even worse, both unchanged with industry-low scores of 76.

BMW moves into a tie with Lexus atop luxury vehicles

Lexus, which topped the luxury segment for the last four years, slid 1% to an ACSI score of 81 and fell into a first-place tie with BMW, up 4% year over year. Audi (unchanged) and ACSI newcomer Tesla were next with scores of 80. The remaining luxury vehicles all suffered customer satisfaction slips.

Mercedes-Benz dropped 3% to 78, followed by Cadillac and Volvo, down 4% and 1%, respectively, at 77. Acura and Lincoln fell 1% to 76. Infiniti sat alone at the bottom of the luxury segment after plunging 5% to an ACSI score of 75.

In terms of the driving experience, luxury vehicles were down across the board. Drivers are most pleased with comfort (82) and vehicle interiors (82), but both elements slip 2%. Customers appreciate vehicle safety (82) as well; however, it’s down 1% year over year.