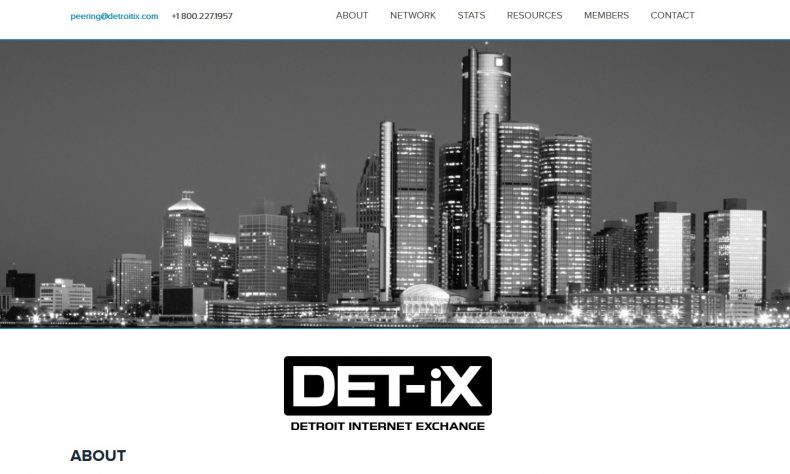 SOUTHFIELD—After several years of effort, officials at the Detroit Internet Exchange (DET-iX) said the organization has been granted tax-exempt status, establishing itself as a long-term, standalone entity and furthering its commitment to improve Michigan internet connectivity.

Since its founding in 2014, the DET-iX has grown to become the largest fee-free exchange in the world and the overall ninth most trafficked exchange in the United States. Its members include many of the world’s major content providers, including Amazon, Facebook, Google, Microsoft, plus an array of regional carriers, educational networks, and businesses.

“By establishing the DET-iX as a non-profit, free exchange, Michigan’s high-tech sector has access to the network connectivity to compete and prosper in an increasingly connected world,” said Ryan Duda, founder of the DET-iX and CTO at 123NET. “Routing internet traffic through the exchange reduces transit costs, improves speed and creates a direct path between member networks.”

Internet exchanges allow members to pass traffic directly between one another, rather than purchasing transit through a third-party provider. As a result, traffic stays local and is optimized towards preferred pathways. Performance increases while costs decrease.

While other global exchanges are managed by a for-profit entity and charge to connect, Duda originally envisioned an internet exchange for Detroit as a standalone, non-profit and fee-free entity. After launching the exchange inside 123NET’s carrier-neutral data center in Southfield, Duda began the process of securing non-profit status. The DET-iX is now managed by a volunteer board of directors that includes Duda as well as representatives from several regional network providers and other exchange members.

DayStarr Communications, an internet and telecommunications company serving Shiawassee and Clinton counties, joined DET-iX as a way to improve connectivity and network speeds to its clients. Collin Rose, DayStarr’s president, said, “The DET-iX has allowed us to improve the quality of experience for our customers while at the same time rehoming 50% of our traffic from paid transit providers.”

The DET-iX member traffic has more than doubled year over year since its founding. In May of 2021, real-time traffic peaked at 325 Gbps, roughly equivalent to streaming over 100,000 movies simultaneously. When traffic is exchanged locally, members are saving thousands of dollars per month in transit costs, making this the most efficient way to move data in Michigan.

Any organization with their own ASN (autonomous system number) and IP addresses can connect freely to the DET-iX. For more information, visit www.detroitix.com