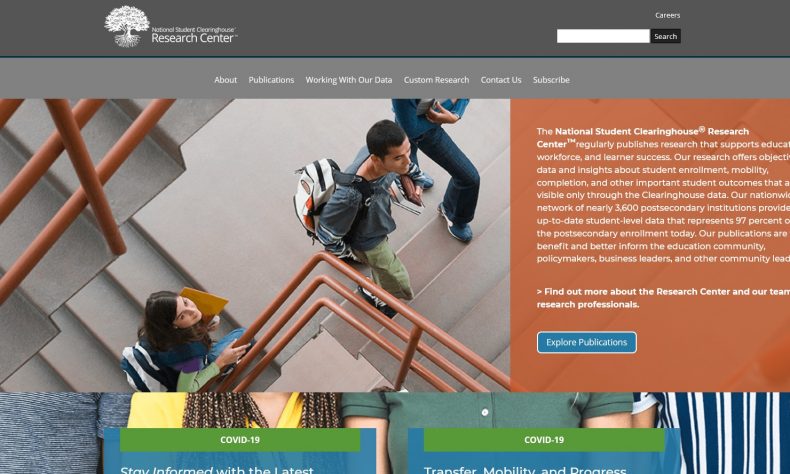 HERNDON, Va.—This spring’s overall college enrollment fell to 16.9 million students from 17.5 million, marking a one-year decline of 3.5% or 603,000 students, according to a new report by the National Student Clearinghouse Research Center.

This is seven times worse than the decline a year earlier, and the largest decline in year-over-year percent change and student headcount since spring 2011, which is the first year the Research Center published enrollment data. The second steepest enrollment decline was recorded in Fall 2020.

“The final estimates for spring enrollment confirm the pandemic’s severe impact on students and colleges this year,” said Doug Shapiro, executive director of the research center. “How long that impact lasts will depend on how many of the missing students, particularly at community colleges, will be able to make their way back to school for the coming fall.”

California led the nation in enrollment loss by headcount with a decrease of nearly 123,000 students. New Mexico declined the most by percentage by dropping 11.4%. Michigan placed in the top five states for both declining enrollment (-29,189) and percentage drop (-6.4%). Meanwhile, only seven states increased enrollments, with New Hampshire rising 10.8% or 18,153 students. Newly added this year, state-level spring enrollments are broken out by institution sector.

Business, healthcare, and liberal arts continue to be the most common undergraduate majors for both four-year and two-year college students. For year-over-year percent change, computer sciences and psychology showed the largest enrollment growth at four-year colleges, +3% and +4.8%, respectively.

Among two-year college major fields with more than 100,000 students, enrollment fell most in visual and performing arts (-18.1%); security and protective services (-16.7%); multi- or inter-disciplinary studies (-14.1%); and liberal arts and general studies (-13.8%). Psychology and legal professions were the only growing fields for two-year college students this spring, +0.8% and +4.8%, respectively.

The National Student Clearinghouse Research Center is the research arm of the National Student Clearinghouse. The center collaborates with higher education institutions, states, school districts, high schools, and educational organizations as part of a national effort to better inform education leaders and policymakers. The Research Center currently collects data from more than 3,600 postsecondary institutions, which represent 97 percent of the nation’s postsecondary enrollments in degree-granting institutions, as of 2019. Clearinghouse data track enrollments nationally and are not limited by institutional and state boundaries. To learn more, visit https://nscresearchcenter.org.