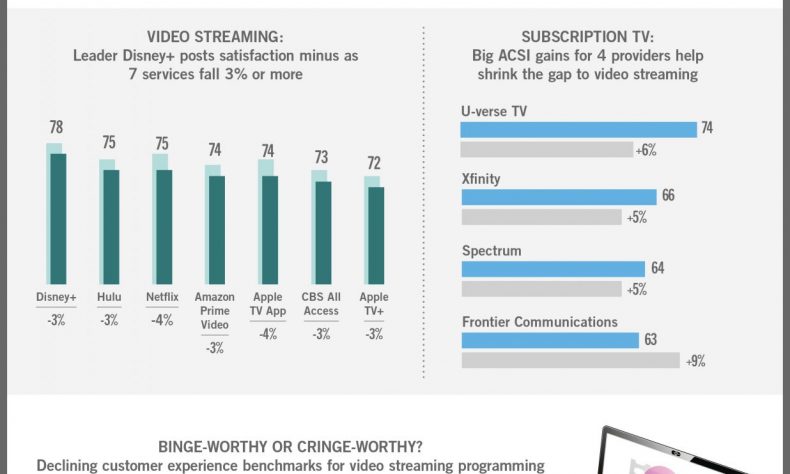 ANN ARBOR—When COVID-19 forced Americans to stay home, many turned to streaming, taking solace in their ability to binge-watch entertainment of all shapes and sizes. But it was only a matter of time before fatigue set in.

After a steady mark last year, customer satisfaction with video streaming tumbled 2.6% to a score of 74 (on a scale of 0 to 100), according to the American Customer Satisfaction Index  Telecommunications Study 2020-2021. While consumers still prefer streaming above all other telecom industries, its stranglehold on the segment is slipping as its lead over the next closest industry shrank to just 3 points.

“With folks resigned to stay at home for the better part of a year and a half, the heavy strain on telecommunications was inevitable,” says David VanAmburg, managing director at the ACSI. “The large consumption of bandwidth for internet services and countless hours spent streaming videos and movies were sure to impact satisfaction. And it turns out that streaming has taken the biggest hit of all.”

Disney+’s lead declines, while Netflix is now middle of the road

Video streaming remains the customer satisfaction leader among telecom industries despite its current decline. However, its advantage over subscription TV shrank from 12 to 9 points.

Following a strong debut last year, Disney+ fell back to earth. It still outpaces its competitors in video streaming, and across all five telecom categories, but customer satisfaction diminished 3% to an ACSI score of 78.

Microsoft Store moved into second place after climbing 1% to 77, followed by Amazon’s Twitch, up 1% to 76.

Netflix’s fall from grace continued for a second year. The once-upon-a-time frontrunner plummets 4% to a score of 75, tying it with four others: Hulu (down 3%), HBO (up 1%), newcomer HBO Max, and YouTube TV (unchanged).

The group of smaller streaming services lost half of last year’s gain, dropping 3% to the industry average of 74. Four other companies also met the average: Amazon Prime Video (down 3%), Apple TV App (down 4%), Google Play (unchanged), and Starz (down 1%).

Crackle sits at the bottom of the industry once again, unmoved at an ACSI score of 68.

Following a 3.2% bump last year, customer satisfaction with subscription TV service climbed again, up 1.6% to an ACSI score of 65.

Satellite providers DIRECTV (up 3%) and DISH Network (up 2%) shared third place with Comcast’s Xfinity at 66. The latter continued its momentum from the previous year, gaining 5%.

The remaining companies all scored below the industry average of 65. Charter Communications’ Spectrum climbed 5% to 64, just ahead of Frontier Communications, which skyrocketed 9% to 63. The group of smaller subscription TV providers and Cox both remained unchanged at 62, while Altice’s Optimum tumbled 5% to 60.

The bottom two companies fell below 60. Mediacom slid 2% to 59, while Altice’s Suddenlink stayed in last place with a steady score of 56.

Customer satisfaction with ISPs is unchanged at an ACSI score of 65.

Comcast’s Xfinity came in second place following a 2% jump to 67. Cox (up 3%) and Charter Communications’ Spectrum (unchanged) tied at 63.

The group of smaller ISPs (down 3%) and Lumen Technologies’ CenturyLink (down 2%) both sank to 62. Windstream remained stable at 61, while Mediacom (up 2%) and Altice’s Optimum (down 8%) each scored 60.

Two ISPs occupy the bottom of the industry with scores in the 50s. Frontier Communications increased 4% to 57, while Altice’s Suddenlink slumped into last place, dropping 4% to 55.

TP-Link has slight edge for in-home Wi-Fi quality; Verizon Fios and AT&T Internet not far behind

Verizon Fios and AT&T Internet led all ISPs in Wi-Fi quality with scores of 74 each. Comcast’s Xfinity was close by at 73, followed by Cox at 71.

Charter Communications’ Spectrum posted a quality score of 69, followed by Mediacom at 68. Lumen Technologies’ CenturyLink, Altice’s Optimum, and Windstream all scored 67, while Altice’s Suddenlink came in at 66. Frontier Communications finished last at 63.

Among third-party Wi-Fi equipment, TP-Link set the pace with a Wi-Fi quality score of 75. Netgear and ASUS were next at 73, followed by LinkSys at 72.

Once again, customers using third-party Wi-Fi equipment are by and large more satisfied than those relying on ISP-provided equipment. While ISP and third-party customers were equally satisfied with the security of their Wi-Fi connection (ACSI scores of 74), third-party equipment ranked higher for range of service, multiple device connections, avoiding service loss, upload/download speed, service restart, and price paid.

Customer satisfaction with the video-on-demand services of major cable, satellite, and fiber-optic subscription TV providers slid 1.5% to an ACSI score of 67.

AT&T’s U-verse TV held the top spot despite slipping 1% to 73. Comcast’s Xfinity improved 4% to 71, good for a second-place tie with Verizon Fios (unchanged).

DISH Network and DIRECTV each scored 69. The former slipped 3%, while the latter remained unchanged.

The group of smaller video-on-demand services finished in last place after dropping 2% to 63.

AT&T soars to the lead among landline phone providers

Customer satisfaction with landline phone service inched up 1.4% to an ACSI score of 71.

The group of smaller landline providers dipped 1% to 70, while Altice’s Optimum jumped 4% to meet them. Charter Communications’ Spectrum (up 1%) and Comcast’s Xfinity (down 1%) tied at 69, followed by Cox, which climbed 3% to an ACSI score of 68. Windstream (up 6%) was next at 67.

At the bottom of the industry, Lumen Technologies’ CenturyLink was steady at 65, while Frontier Communications (up 5%) and Altice’s Suddenlink (down 5%) shared last place at 62 apiece. 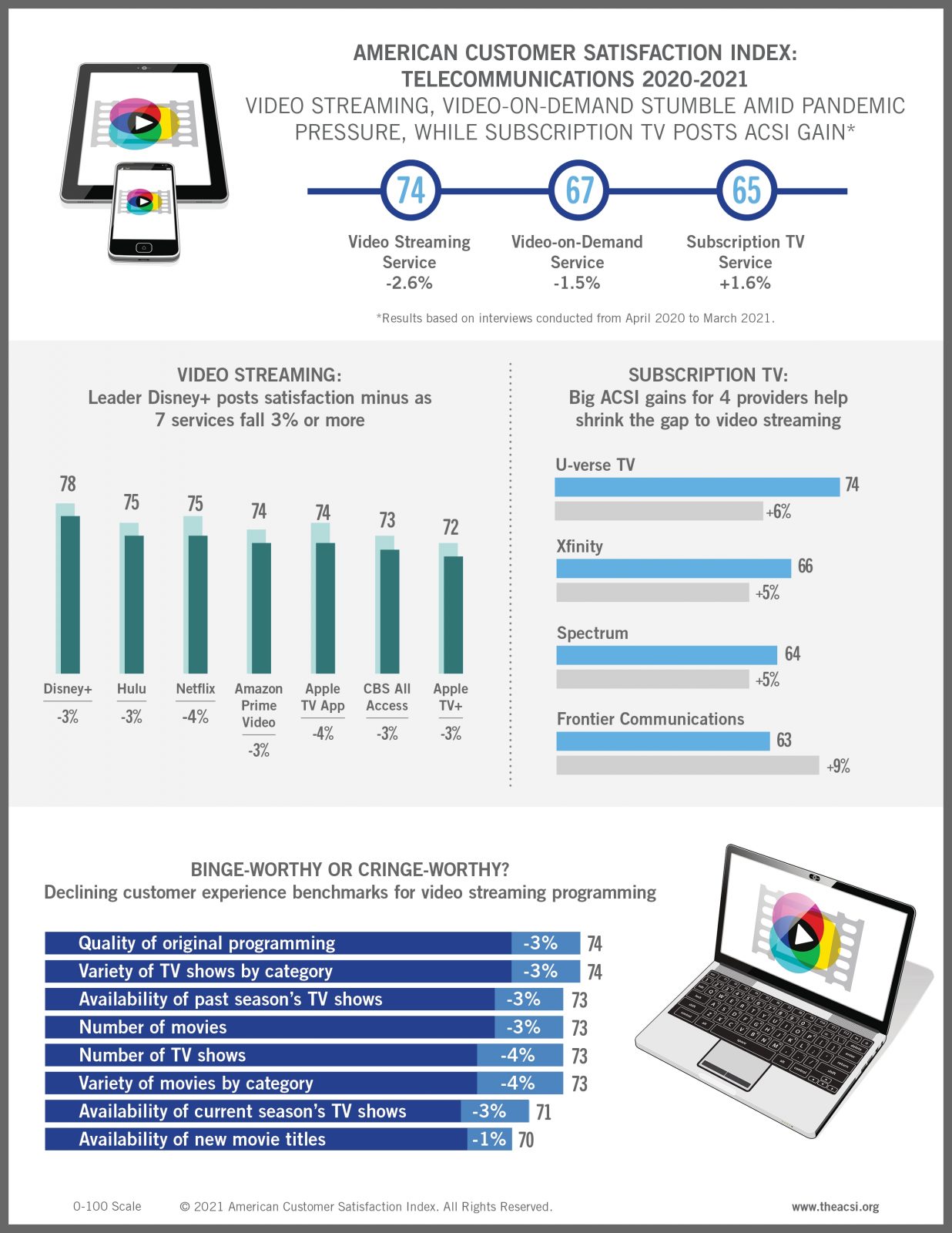