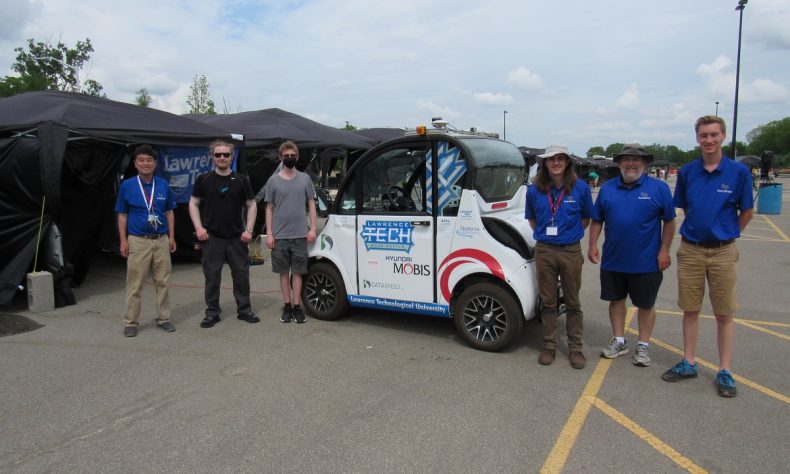 SOUTHFIELD—After taking a year off due to the pandemic, it was back to form for Lawrence Technological University at the 28th Intelligent Ground Vehicle Competition (IGVC), held Friday through Monday, June 4-7, at Oakland University in Rochester.

In the competition, teams were asked to design, fabricate, and program a self-driving system for a Polaris GEM two-seat electric car. The car had to maneuver around a road course laid out on an Oakland U parking lot, avoiding obstacles and stopping for stop signs, all with no driver input. LTU’s car completed the course in a little over three minutes.

“This project is a great opportunity for LTU students to have research experience for autonomous vehicle technologies. We have already published one journal and three peer reviewed conference papers directly from this project,” Chung said.

The other competition at IGVC, the Auto-Nav Challenge, saw teams design, build and program small cartlike vehicles that had to maneuver around obstacles on a road course. LTU finished fourth in this part of the competition, and also won a sixth-place finish in a special design award. Advising this team was Giscard Kfoury, associate professor of mechanical, robotics, and industrial engineering.

“It was great to be able to have the competition in person,” Kfoury said. “And the team did a fantastic job, especially given the complications and restrictions caused by COVID. Despite all the challenges, they built a very reliable robot, and overcame many issues.”

The number of competitors shrank in this year’s IGVC due to the pandemic, with 16 universities participating, down from about 40 in 2019, organizers said—mostly because international teams couldn’t attend. Prior years have seen teams from Canada, Mexico, Turkey, and India competing.

The IGVC was established in 1993 by the U.S. Army’s Combat Capabilities Development Command (CCDC) Ground Vehicle Systems Center (formerly known as TARDEC) and the Association for Unmanned Vehicle Systems International (AUVSI). More about the competition at www.igvc.org.

Lawrence Technological University, www.ltu.edu, is a private university founded in 1932 that offers nearly 100 programs through the doctoral level in its Colleges of Architecture and Design, Arts and Sciences, Business and Information Technology, and Engineering. PayScale lists Lawrence Tech among the nation’s top 11 percent of universities for the salaries of its graduates, and U.S. News and World Report lists it in the top tier of best Midwestern universities. Students benefit from small class sizes and a real-world, hands-on, “theory and practice” education with an emphasis on leadership. Activities on Lawrence Tech’s 107-acre campus include more than 60 student organizations and NAIA varsity sports.