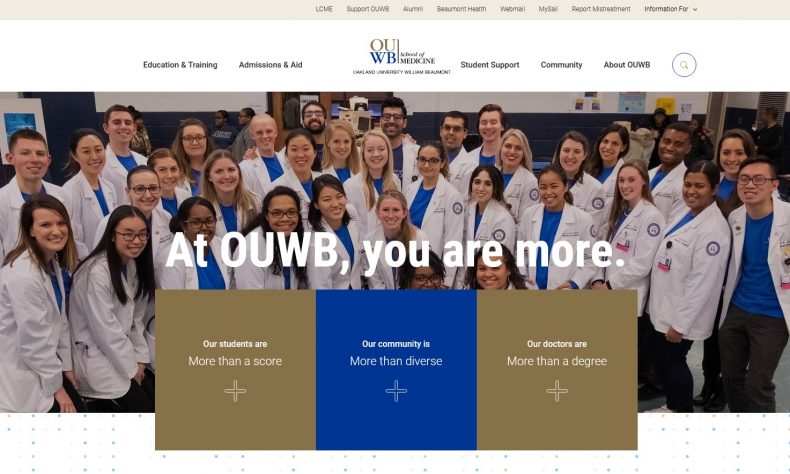 ROCHESTER–Oakland University and William Beaumont Hospitals have extended their affiliation agreement through 2041.

The amended agreement also enhances capabilities for researchers from both organizations, essentially allowing them to share data more easily and expand the amount of research conducted.

Beaumont Health President and CEO John Fox added, “It is critically important to provide exceptional training and education for the next generation of physicians. We are thrilled to extend our partnership with Oakland University, and I know our physicians, nurses, and staff are very pleased to continue working with OUWB’s outstanding medical students.”

The origins of the affiliation agreement date to the mid-2000s, when exploratory discussions among community leaders and officials at Oakland University (OU) and William Beaumont Hospitals concluded that the combined faculty, staff, and infrastructure resources of their institutions would provide a remarkably strong base on which to build a new medical school.

In January 2007, OU and Beaumont submitted a letter of intent to the Liaison Committee on Medicine Education (LCME) to initiate the formal process of accrediting a new allopathic medical school. The initiative to fund a new medical school was approved by both the Beaumont Health Board of Directors and the Oakland University Board of Trustees on July 31, 2008.

At the time, officials announced the name of the school would be Oakland University William Beaumont School of Medicine and described their vision for the school as “a partnership to lead innovation in patient-center medical education and research.”

Officials also said establishment of Oakland County’s first medical school and Michigan’s first new medical school in nearly 50 years would have an economic impact of up to $1 billion annually and help address a then-projected shortage of physicians in Michigan.

Since OUWB welcomed its first class in 2011, the school has graduated 548 physicians. OUWB currently has about 500 students enrolled. OUWB graduates are recruited to the top residency programs in the country and are a testament to the excellent training environment provided by Oakland University and Beaumont Health.

“The agreement reaffirms that our OUWB medical students will continue to receive exclusive instruction at three of the best training sites in the country,” said OUWB Stephan Sharf Dean Duane Mezwa, M.D.