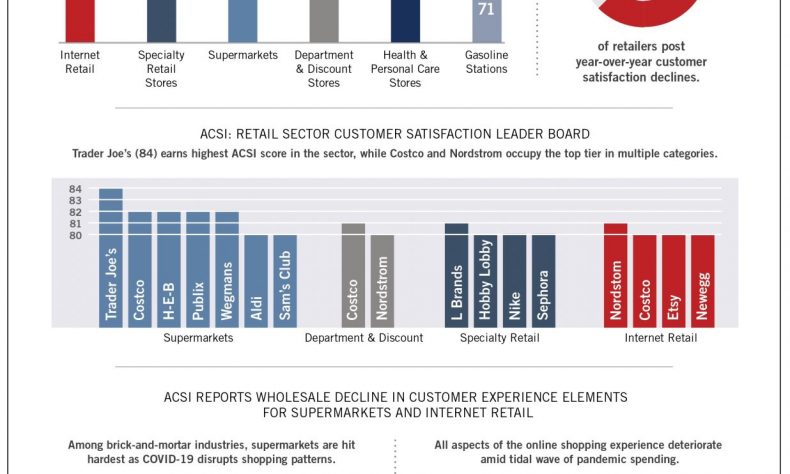 ANN ARBOR—While much of the retail sector anticipates a turnaround in 2021, customer satisfaction is not heading in the right direction.

The retail sector declined 2.3 percent to a score of 75.5 (out of 100), according to the American Customer Satisfaction Index’s (ACSI®) Retail and Consumer Shipping Report 2020-2021. This is the lowest ACSI score posted for the sector since 2015.

“2020 sent waves of disruption across the retail sector,” said David VanAmburg, managing director at the ACSI. “From mandatory closures that halted in-person shopping to stock shortages caused by panic buying, retailers experienced anything but business as usual. Deliveries from online retailers were delayed, and customers were frustrated when high-demand items sold out. And it shows, as 86 percent of the retailers measured suffered downturns in customer satisfaction year over year.”

This report covers six retail industries: department and discount stores, specialty retail stores, health and personal care stores, supermarkets, internet retail, and gas stations, as well as consumer shipping and the U.S. Postal Service. Among the six retail categories, not one escaped the trend of declining customer satisfaction in 2020.

For 2020, online retail lost the most ground among all retail categories, falling 3.7 percent to an ACSI score of 78.

With a stable score of 78, Target was the only e-commerce retailer to buck the downward ACSI trend. Most of the industry scored below the average of 78. Macy’s and Wayfair both tumbled 4 percent to scores of 77, tied with eBay (down 3 percent). Along with Amazon, smaller sites showed the steepest decline in the category, plunging 5 percent to 75. Another big-tech name, Apple, retreated 4 percent to 75.

Costco remained in first place for a fifth straight year, despite declining 2 percent to a score of 81. Its lead is also shrinking.

Nordstrom (which includes Nordstrom Rack) was second, up 1 percent to 80, while Dillard’s was third, up 1 percent to a score of 79. Kohl’s and TJX (Marshalls and TJ Maxx) were next in line, both slipping 1 percent to scores of 78, while BJ’s Wholesale Club (down 3 percent) and Macy’s (down 1 percent) followed at 77 each.

Among the low-end performers, Dollar Tree stumbled 4 percent to an all-time low of 74. Rival Dollar General also lost ground with customers in 2020, falling 3 percent to share the bottom of the category with Walmart (unchanged) at 71.

Customer satisfaction with specialty retail stores receded 1.3 percent to an ACSI score of 77, marking the industry’s lowest point since 2015.

L Brands sat atop the specialty retail store industry for a seventh straight year, slipping 1 percent to an ACSI score of 81. Hobby Lobby and Nike both debuted in second place at 80 apiece. They’re joined by Sephora (unchanged).

Several retailers new to the ACSI were clustered at or within a point of the industry average. Famous Footwear and PVH (Calvin Klein, Tommy Hilfiger) scored 78. Apple and Discount Tire matched the industry average of 77, while American Eagle Outfitters and H&M earned ratings of 76. Another mall-oriented retailer, Signet Jewelers, debuted at 76.

At the bottom of the industry, Williams-Sonoma scored 73 in its debut ACSI appearance. GameStop continued to rank last among all specialty retailers, plummeting 4 percent to an all-time low score of 72.

Smaller drug stores losing their grip over the competition

For a third year, customer satisfaction with the health and personal care (drug) store industry weakened, dropping 1.3 percent to an ACSI score of 75.

The group of smaller drug stores remained the industry leader, albeit with a lower score, down 4 percent to 79. CVS was next, steady at 77 for the third straight year, followed by Kroger, which slid 3 percent to a score of 76.

After four years of near-stable customer satisfaction, the supermarket industry fell 2.6 percent to 76, with 17 of 20 major grocers posting lower scores year over year.

The remaining top-tier performer from 2019, Aldi, slipped 4 percent to tie with a stable Sam’s Club at 80.

At the low end of the industry, a group of big decliners languish further behind the industry average than they did in 2019. Southeastern Grocers slid 4 percent to 73, while Giant Eagle plummeted 5 percent to 72.

Despite handling more packages than ever before, customer satisfaction with consumer shipping slid just 1.3 percent to an ACSI score of 76. However, this represents an all-time industry low.

FedEx remained in the lead despite declining 3 percent to 78. Customer satisfaction with UPS faded for a third straight year, dipping 1 percent to 75. The U.S. Postal Service’s (USPS) Express and Priority Mail managed to gain a point to 73.

The American Customer Satisfaction Index Retail and Consumer Shipping Report 2020-2021 is based on interviews with 70,767 customers, chosen at random and contacted via email between Jan. 13 and Dec. 27, 2020. Download the full report. The American Customer Satisfaction Index (ACSI) has been a national economic indicator for 25 years. It measures and analyzes customer satisfaction with more than 400 companies in 47 industries and 10 economic sectors, including various services of federal and local government agencies. Reported on a scale of 0 to 100, scores are based on data from interviews with roughly 500,000 customers annually. For more information, visit www.theacsi.org. 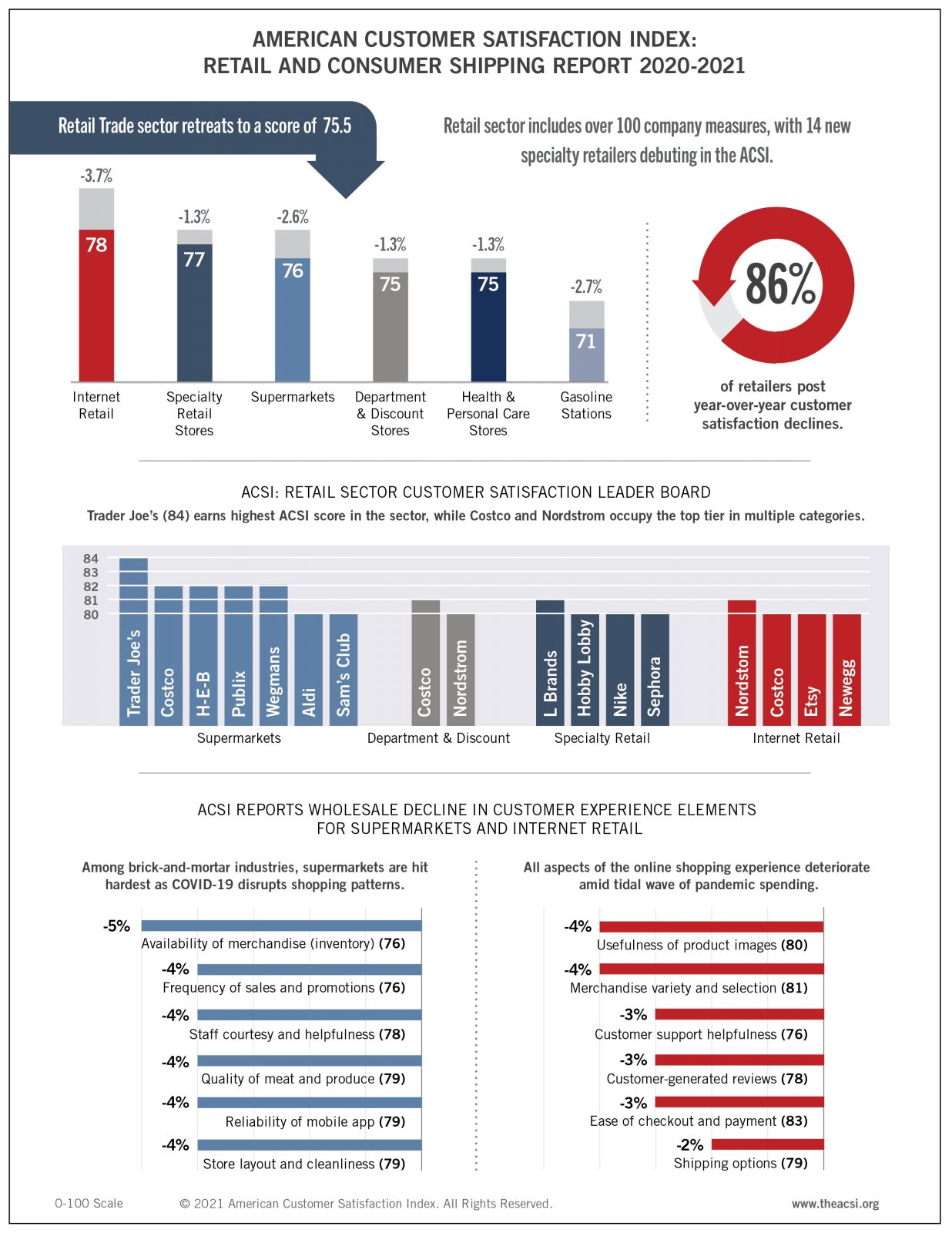