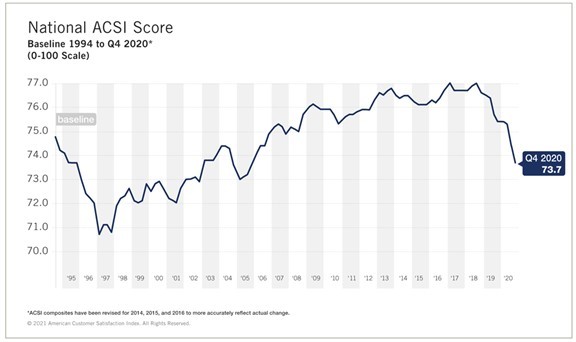 ANN ARBOR—The deterioration in customer satisfaction across all industries in the United States continued in 2020, with a 0.9 percent drop in the fourth quarter to a score of 73.7 (out of 100), according to the national American Customer Satisfaction Index.

While the COVID-19 pandemic may have exacerbated things, the decline in ACSI began more than a year before the pandemic hit. In fact, national customer satisfaction has declined in eight of the past nine quarters. It’s now at its lowest level since 2005.

Since ACSI is predictive of both consumer spending and GDP, both have been fragile for some time. However, the weakness in consumer spending is not due to lack of disposable income or lack of savings. Both have gone up. Nevertheless, GDP contracted by 3.5 percent for the year 2020 even though it was up by 4 percent in the final quarter.

What are the other factors that have contributed to the decline in customer satisfaction?

One such factor may be that U.S. domestic markets have become less competitive. Barriers to entry have increased and capital investments have dropped. Another likely factor is that the tools companies use for analyzing data about customers need improvement. The IT revolution has led to growth of data supply, more data storage, faster transmission, distribution, and crafty data display.

However, to ascertain how to best satisfy and keep customers, information about cause-and-effect is necessary. Many of the analytical tools rely on artificial intelligence to find patterns in consumer data, but patterns say little about cause and effect. Increased use of causal models would probably be an effective remedy.