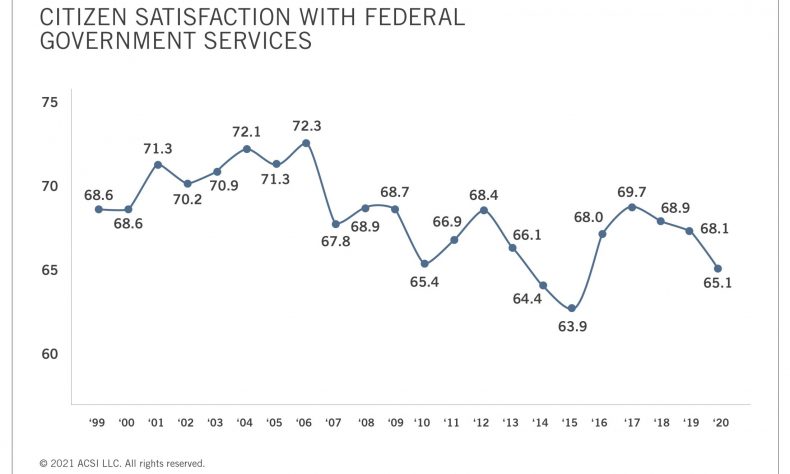 Citizen satisfaction plummeted 4.4 percent to a score of 65.1 out of 100 in the American Customer Satisfaction Index’s Federal Government Report 2020.

“For the third straight year, satisfaction with the federal government takes a turn for the worse,” said Forrest Morgeson, assistant professor of marketing at Michigan State University and director of research at the ACSI. “Marred by the COVID-19 pandemic, a contentious run-up to the November federal elections, and uncertainty following those elections, citizen satisfaction now resides at its lowest level since 2015, making the government’s uphill climb that much steeper.”

Efficiency and ease of government processes diminished 3 percent to 66, ease of accessing and clarity of information dropped 3 percent to 69, and perceptions of government website quality tumbled 5 percent to 71. The professionalism and courtesy of customer service scored highest among the drivers of citizen satisfaction, steady at 74.

These changes reflect a broad and deep erosion of the quality of federal government services experienced by citizens in 2020.

Commerce and Agriculture stand out, while Treasury comes up short

Citizen satisfaction differed widely across departments, with larger observed variance among federal departments than among companies in most private sector industries.

This year, the Departments of Commerce and Agriculture led the way, both at 74.

The remainder came in well below the economy-wide national ACSI average (74.4 as of the third quarter of 2020), with the Department of Treasury bringing up the rear at 60. It’s worth noting that due to the COVID-19 pandemic, fewer distinct federal departments are captured in the ACSI 2020 sample.

The ACSI federal government study does not measure public approval of specific politicians or political parties. However, political party affiliation is likely to have some influence on citizen satisfaction with government services, according to ACSI data.

Looking at trends in citizen satisfaction by party affiliation between 2019 and 2020, Democrats (down 4 percent to 68), Republicans (down 7 percent to 65), and Independents (down 5 percent to 62) all displayed declining satisfaction year over year. Each group now recorded its lowest score since 2018. Only the much smaller group of “Other Party” supporters (up 7 percent to 62) report higher satisfaction in 2020 than in the two prior years.

The ACSI Federal Government Report 2020 is based on interviews with 1,291 users, chosen at random and contacted via email throughout the year. Download the full report at https://www.theacsi.org/news-and-resources/customer-satisfaction-reports/reports-2020/acsi-federal-government-report-2020.

The American Customer Satisfaction Index (ACSI) has been a national economic indicator for 25 years. It measures and analyzes customer satisfaction with more than 400 companies in 47 industries and 10 economic sectors, including various services of federal and local government agencies. Reported on a scale of 0 to 100, scores are based on data from interviews with approximately 500,000 customers annually. For more information, visit www.theacsi.org.