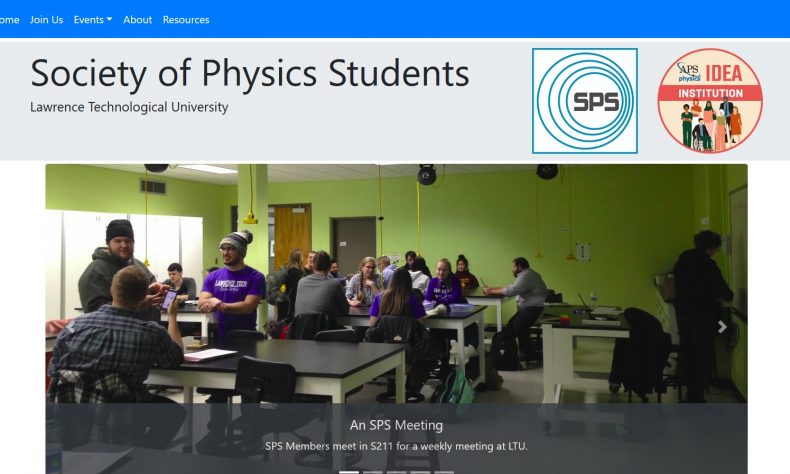 SOUTHFIELD—Lawrence Technological University students have been nationally recognized for their efforts in promoting physics to the general public and promoting scientific literacy.

The LTU chapter of the Society of Physics Students has been named a 2019-2020 winner of the SPS Blake Lilly Prize, as well as a SPS Distinguished Chapter.

In a letter from Brad R. Conrad, director of the prize programs for College Park, Md.-based SPS, “Reviewers noted the quality of your chapter’s science outreach activities and were impressed with the reach and scope of your efforts… Thank you for your part in communicating science to the public.” The citation for the Blake Lilly Prize was for “outreach activities that promote physics education and physics appreciation.” The award was established by the family of Blake Lilly, an avid physics graduate student at the University of Arizona who died in 1990.

LTU’s chapter will be featured for its outreach efforts on the national SPS website and in 2021 SPS publications.

Physics is the natural science that studies matter, its behavior and motion through space and time, and the related entities of energy and force. Physics has applications in numerous disciplines, from medical science to astronomy to materials science.

LTU chapter president Mark Kocherovsky said the organization has expanded its outreach efforts and events schedule since the fall of 2019. Pre-pandemic, the SPS chapter conducted public experiment days in the atrium of LTU’s Buell Building. Included were demonstrations of using sound waves to suspend objects in midair, using optics to view the interactions between warm and cool air, and using a fabric table to mimic the effects of gravity on spacetime. The chapter has also brought in outside experts and LTU alumni to discuss their research and career paths.

The chapter has also become involved with the APS Inclusion, Diversity, and Equity Alliance (APS-IDEA), and last September conducted a survey on diversity in physics. The SPS chapter will use the data to develop an action plan to boost diversity.

Looking ahead, once the realities of the pandemic make public gatherings possible again, Kocherovsky said the chapter plans to host a party to celebrate the award—as well as return to a regular schedule of game nights, guest lectures and panel discussions and experiment days. “We’re also exploring an alumni conference where LTU alumni can come and speak on their work and research and career paths,” he said. “We also want to do more community outreach at high schools, talking about physics and trying to get students to come to LTU.”

All the students say they plan to continue their education, and go into fields of study ranging from astronomy to advanced computing to medical devices.

For more information on the chapter, visit https://ltusps.github.io/.

Lawrence Technological University, www.ltu.edu, is a private university founded in 1932 that offers nearly 100 programs through the doctoral level in its Colleges of Architecture and Design, Arts and Sciences, Business and Information Technology, and Engineering. PayScale lists Lawrence Tech among the nation’s top 11 percent of universities for the salaries of its graduates, and U.S. News and World Report lists it in the top tier of best Midwestern universities. Students benefit from small class sizes and a real-world, hands-on, “theory and practice” education with an emphasis on leadership. Activities on Lawrence Tech’s 107-acre campus include more than 60 student organizations and NAIA varsity sports.