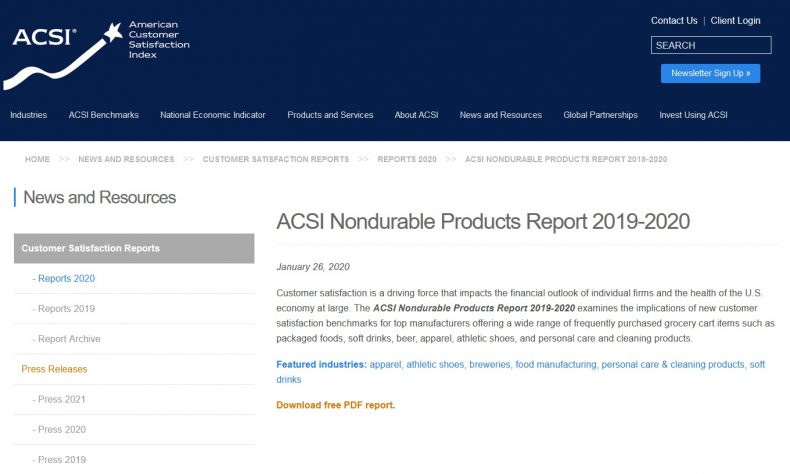 ANN ARBOR—Customer satisfaction with so-called nondurable manufactured goods has fallen during the pandemic, according to the American Customer Satisfaction Index.

The sector’s score fell 1.5 percent from a year earlier to a score of 79.2 out of 100, according to the American Customer Satisfaction Index’s (ACSI) Nondurable Products Report 2019-2020.

“While consumers still view the nondurables industries more favorably than others, the sector’s grip over the Index isn’t as tight as it once was,” said David VanAmburg, managing director at the ACSI. “Shopping patterns shifted almost overnight as customers stocked pantries during the early stages of the U.S. COVID-19 outbreak. The resulting supply chain issues and shortages led food processors and beverage makers alike to trim their product offerings and focus on core products to meet unprecedented demand. Unfortunately, they didn’t do enough to balance customer expectations.”

After holding steady last year with an ACSI score of 82, customer satisfaction with food manufacturing stumbled 3.7 percent to 79. Among 11 major food processors, not one improved.

Despite dropping 2 percent year over year, Quaker sat atop the food manufacturing industry with an ACSI score of 82. Dole slipped 2 percent but retained its second-place position at 81, tying Hershey and Mars with the former falling 4 percent and the latter down 1 percent.

The remaining companies all scored below the industry average. Four companies scored 78: General Mills (down 5 percent), Kellogg (down 3 percent), Ferrero (down 4 percent), and Tyson (down 3 percent). Campbell Soup and Kraft Heinz shared the bottom spot, both sinking 5 percent to record-low scores of 77.

Customer satisfaction with soft drinks retreated 2.4 percent to an ACSI score of 80, just shy of the industry’s all-time low.

Keurig Dr Pepper and PepsiCo each slid 1 percent yet shared the top spot at 81. The large group of smaller soft drink makers slipped 2 percent to a score of 80, while Coca-Cola lagged slightly behind, down 2 percent to 79, matching its previous low ACSI score.

Beer makers take a hit, no longer alone at the top of the ACSI

Customer satisfaction with breweries took a bigger hit than soft drinks, slumping 3.6 percent to an ACSI score of 81. Nevertheless, breweries remained at the top of the Index, now tied with internet retail.

Among the big brewers, Anheuser-Busch InBev stayed ahead of Molson Coors, but both companies sustained significant downturns in customer satisfaction. For AB InBev, satisfaction diminished 5 percent to 80, while Molson Coors slumped 4 percent to match its former low of 78.

Following two years of high and stable customer satisfaction, the personal care and cleaning products industry fell 4.8 percent to an ACSI score of 79.

Despite a slight slip of 1 percent, Clorox regained the industry lead at 81. During the pandemic, consumer demand for disinfectants and bleach exploded, with Clorox seeing fivefold spikes for some of its products in March 2020.

Just a point lower, Colgate-Palmolive dropped 2 percent to 80. Procter & Gamble took a greater hit, tumbling 5 percent to the same score. Both Henkel and Johnson & Johnson gained 3 percent to match the industry average at 79, tying them with the group of smaller manufacturers – including brands like Arm & Hammer, Sensodyne, and Bath & Body Works, which plummeted 7 percent after holding the top spot in 2019.

At the bottom of the category, Unilever faded 3 percent to 78, marking its second straight year of customer satisfaction decline and first time below 80 in over two decades.

Satisfaction with apparel rises to the occasion

The apparel industry overall bucked the trend of declining customer satisfaction in the Manufacturing/Nondurables sector, climbing 2.6 percent to an ACSI score of 79.

The smaller clothing makers that represent the bulk of the category deserve the lion’s share of the credit. Producing casual clothes, sportswear, jeans, and basic items such as underwear and socks under countless labels like Fruit of the Loom, Victoria’s Secret, and Wrangler, the group of smaller clothing companies rose 3 percent to an ACSI score of 79.

Levi Strauss followed the industry trend, also up 3 percent to 79. The other larger clothing companies, however, weren’t so lucky.

VF, maker of The North Face, Timberland, and Vans, dropped 3 percent to 77, while customer satisfaction with Hanesbrands retreated 5 percent to 76.

No athletic shoe producer showed a significant advantage in customer satisfaction. Nike, barely in first place, drops out of the 80s with a 4 percent decrease to 78. Adidas experienced the Sbiggest decline among major companies in the Nondurables sector, toppling 7 percent to land at 77. The large group of smaller athletic shoemakers—including brands like Skechers, New Balance, Fila, and Asics—slid 3 percent to 77 as well.

The ACSI Nondurable Products Report 2019-2020 is based on interviews with 13,168 customers, chosen at random and contacted via email between October 9, 2019, and September 25, 2020. Download the full report, and follow the ACSI on LinkedIn and Twitter at @theACSI.

The American Customer Satisfaction Index (ACSI) has been a national economic indicator for 25 years. It measures and analyzes customer satisfaction with more than 400 companies in 47 industries and 10 economic sectors, including various services of federal and local government agencies. Reported on a scale of 0 to 100, scores are based on data from interviews with roughly 500,000 customers annually. For more information, visit www.theacsi.org.