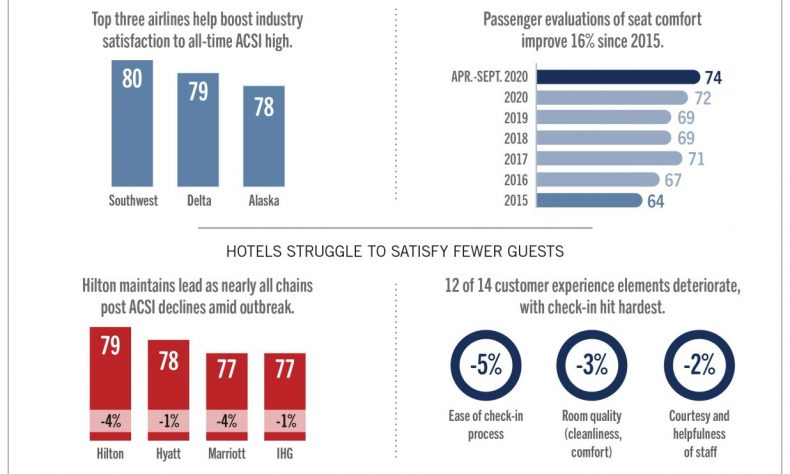 Airlines had been gradually trending upward in passenger satisfaction for two years running and hotels made slight gains year over year. But internet travel services posted a substantial satisfaction loss relative to 2019.

However, according to the ACSI Special COVID-19 Travel Report 2020, only airlines have improved customer satisfaction during the pandemic.

“Hotel guest satisfaction takes a U-turn, with ACSI losses for nearly every major chain,” said David VanAmburg, Managing Director at the ACSI. “Online travel agencies dig themselves an even deeper hole as the industry reaches an all-time user satisfaction low.”

The new report examines satisfaction results for airlines, hotels, internet travel services, and the debut scores for the car rental industry. Based on surveys conducted from April 1 to Sept. 30, 2020, the new scores are compared to previously published 2020 results for the four travel industries from surveys conducted between April 15, 2019, and March 20, 2020.

Southwest soars to the lead among airlines

Despite the dire financial situation for airlines this year, passenger satisfaction with the industry is flying high, climbing 1.3 percent to a previously unmatched ACSI score of 76 (out of 100).

Southwest soared to the top of the industry with a 1 percent gain to 80. Delta placed second for the first time since 2004, rising 3 percetn to a company record high of 79. Alaska Airlines came in third, stable at 78. Two airlines tied at the industry average of 76: JetBlue (down 3 percent) and United (up 1 percent).

The remainder of the field was below the industry average. The group of smaller carriers jumped 6 percent to 74, while American dipped 1 percent to 73. Budget-minded Allegiant was next, falling 3 percent to 72.

The hospitality industry has taken a beating during the pandemic, and it is uncertain when most consumers will feel more at ease with staying in a hotel. During this turbulent time, guest satisfaction for the industry overall fell 2.6 percent to 74.

Hilton remained the industry satisfaction leader despite tumbling 4 percent to an ACSI score of 79. Hyatt was in second place, slipping 1 percent to 78. IHG (down 1 percent) and Marriott (down 4 percent) tied at 77.

Moving in lockstep with the industry average, Best Western fell 3 percent to 74. Choice slid 1 percent to 72, tying with Wyndham, which remained unchanged. The group of smaller hotel chains slipped 1 percetn to 71, leaving G6 Hospitality alone at the bottom of the industry, down 2 percent to 64.

Among these hotels’ individual brands, based on 2019-2020 data Marriott’s AC Hotels took top spot with an ACSI score of 85. Choice’s Econo Lodge populated the bottom of the chart with a score of 62.

The car rental industry debuted in the ACSI in 2020 with a score of 76 (based on surveys from January to March 2020). From April to September 2020, overall customer satisfaction remained unchanged.

Enterprise held the top slot, unchanged at 79. Dollar improved dramatically during the outbreak, grabbing second place with a 5 percent gain to 78. The two other Enterprise brands, Alamo and National, tied for third place, each down 1 percent to 76.

Hertz was steady with an ACSI score of 74, while Avis inched back 1 percent to 73. The group of smaller car rental companies was unmoved at 71, tying both Budget and Thrifty. For Budget, customer satisfaction slid 3 percent, while Thrifty was up 3 percent.

From April to September 2020, user satisfaction with internet travel services plummeted 5.2 percent to an all-time low ACSI score of 73.

All five major travel sites, along with the group of smaller sites, experienced downturns in user satisfaction during the outbreak.

As of September 2020, Travelocity held the lead for customer satisfaction despite dropping 3 percent to 77. Expedia was next, slipping 1 percent to 76.

Orbitz and TripAdvisor both fell 4 percent to 75, followed by Priceline, which slid 3 percent to 74. The group of smaller online travel agencies was alone in last place after deteriorating 6 percent to a record-low ACSI score of 72.

The ACSI Special COVID-19 Travel Report 2020 on airlines, hotels, car rentals, and internet travel services was based on interviews with 4,642 customers from April 1 to Sept. 30, 2020. Download the full report, and follow the ACSI on LinkedIn and Twitter at @theACSI. 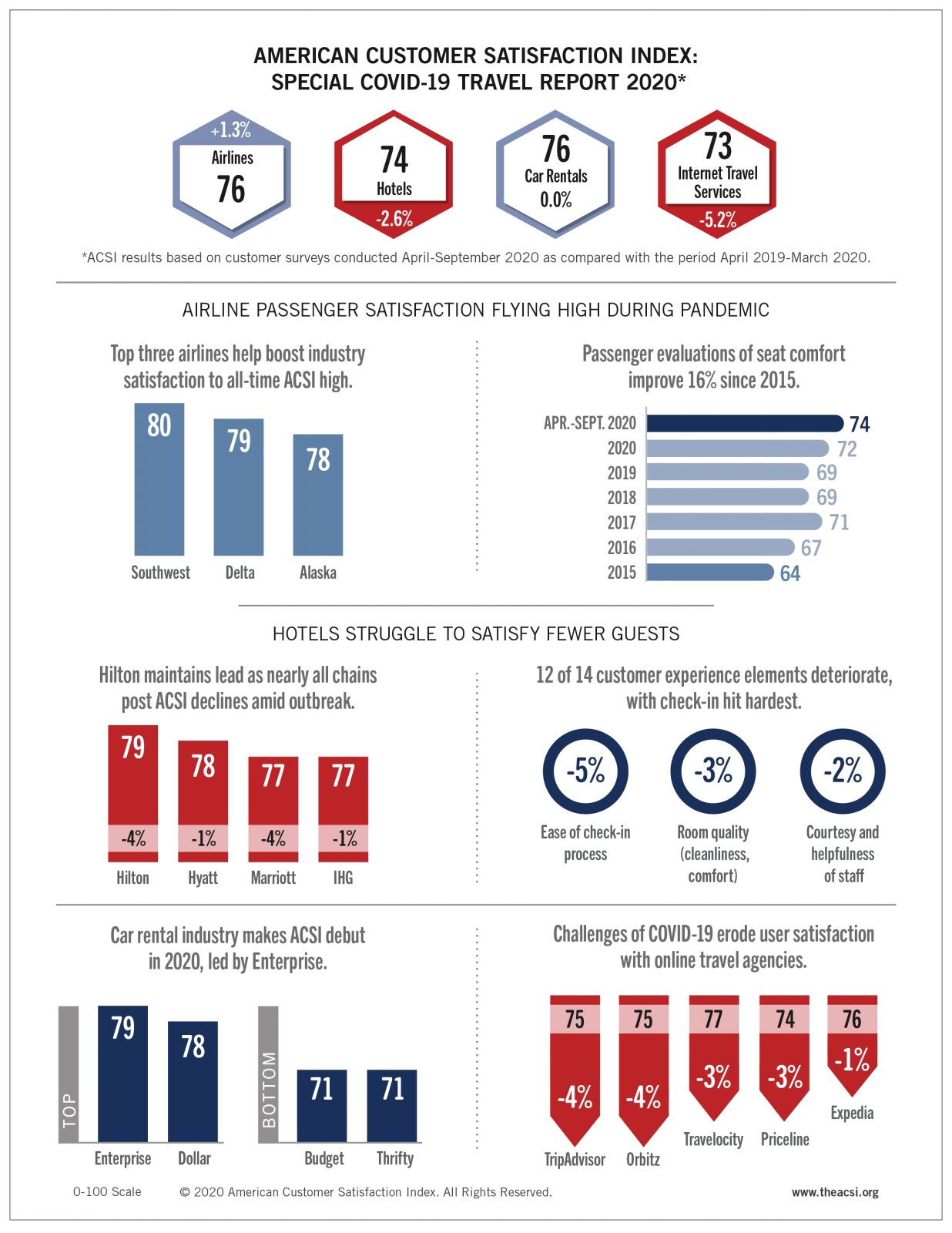