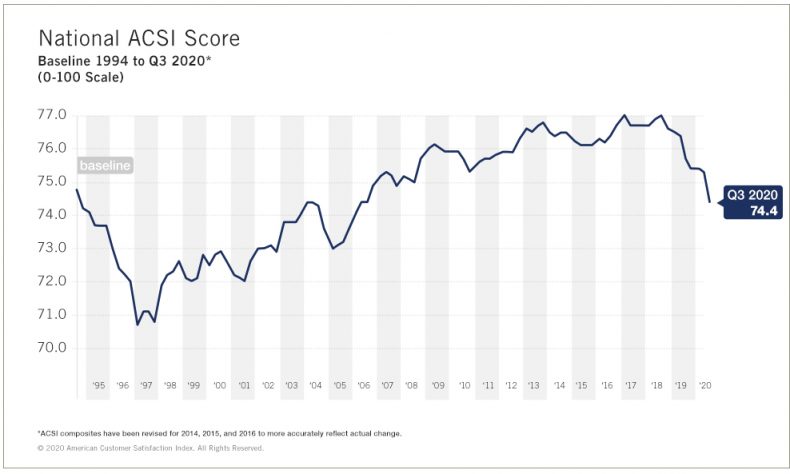 While such a change may seem numerically small, it’s highly significant due to the measurement precision of the ACSI.

Because quality, as gauged by consumers of the goods and services produced, is predictive of the quantity of economic output, GDP is in roller coaster territory: Down more than 30 percent in the second quarter and up by almost the same percentage in the next quarter, it will certainly be down for the year.

The tumble in both ACSI and GDP is obviously due to the pandemic, which has interrupted supply chains and the availability of goods and services in addition to business shutdowns and the economic hardship it has created for many households. This has befallen an economy that was already fragile and without enough strength to combat a major disaster.

Not surprisingly, consumer spending, the largest contributor to GDP, has been weak as well. For consumer spending to grow, there must be population growth or an increase in discretionary spending, or both. Even with low unemployment and very little inflation, discretionary spending has been weak for some time and will most likely be negative for the year.

For discretionary spending to grow, consumers must have both ability and willingness to spend. Ability is largely determined by prices and household income. Willingness is affected by consumers’ expected utility (satisfaction) from consumption. Prices have not increased by much, but neither have wages.

Wages, in turn, are affected by productivity and demand for labor. Productivity growth has been uneven, and demand for labor has not contributed much to wage increases. With the havoc caused by the virus, demand has shrunk. All in all, the chain of factors necessary for a strong economy is broken at every joint.

There is no doubt that the economy will contract in 2020. This is consistent with the weakening of ACSI, which has been shown to be a predictor of GDP.

Overall, the new ACSI results do not bode well. Economic recovery may not just be a matter of producing more with fewer resources, but also a matter of better matching economic output to different tastes and household resources.

“Economic growth depends on the productivity of economic resources and the quality of output that these resources generate,” said Claes Fornell, ACSI Founder and Chairman. “A large proportion of consumers might not have the means to generate the type of spending that economic growth may require. Many companies face declining demand as a result. If enough households had the means to spend more, there would be a spike in demand once the virus is under control. Accordingly, it’s obvious what government needs to do. For the long term, it’s not as straightforward. The links required for improving both quality and quantity of economic output have been damaged and are in serious need of repair.”

The national ACSI score (or ACSI composite) reflects customer satisfaction across all sectors and industries over a rolling 12-month period. For more, follow the American Customer Satisfaction Index on LinkedIn and Twitter at @theACSI or visit www.theacsi.org.