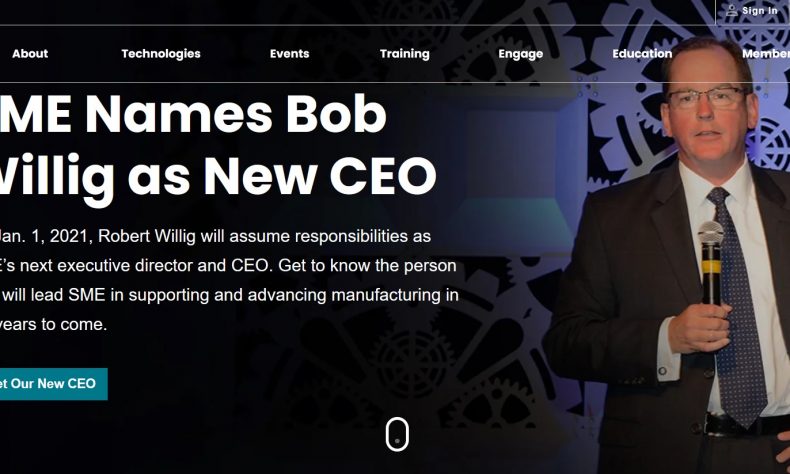 Willig has more than 30 years’ experience in the manufacturing industry, and has held multiple leadership positions for global divisions within major manufacturing companies, most recently at Stoneridge Inc., a Novi-based automotive electronics supplier, where he was president of its control devices division.

Prior to Stoneridge, Willig was president and CEO of Wixom-based Plasan Carbon Composites Inc., and earlier was president for the Americans of GKN Driveline, a United Kingdom-based auto supplier focused on drive system technologies. Earlier in his career, Willig was president of both power transmission and powertrain at Denver-based Gates Corp., a manufacturer of power transmission belts and fluid power products. He has also served on various boards, including Plasan’s board of directors, GKN’s chief executive council and Gates Corp. Asia’s board of directors.

“Bob’s extensive experience and insights into the manufacturing industry make him an ideal leader for SME during this time of disruptive change in manufacturing,” said 2020 SME president Susan Smyth, retired chief scientist at General Motors Global Engineering and member of the National Academy of Engineering. “Bob’s ability to focus on long-term strategy even during a challenging economy, his track record of business development success and his values-based leadership will help SME pursue its mission of advancing manufacturing while building a culture for continued success. We’re very excited to have him as our new CEO.”

Willig will succeed Sandra Bouckley, 2017 SME president, who was appointed SME’s executive director and CEO in July 2018. Bouckley, whose exit was long intended, will remain with SME as a leadership transition consultant through March 31.

“I’m passionate about manufacturing and its people,” said Willig. “For nearly 90 years, SME has been a consistent resource for knowledge, connections and supporting the next generation of manufacturing talent. I’m looking forward to working to protect that legacy while charting a new course for this organization as our industry adapts to advanced technology and a post-COVID economy.”

Willig earned his bachelor’s degree in mechanical systems design from Lawrence Technological University and an MBA from Wayne State University. He will be based at SME’s headquarters in Southfield.