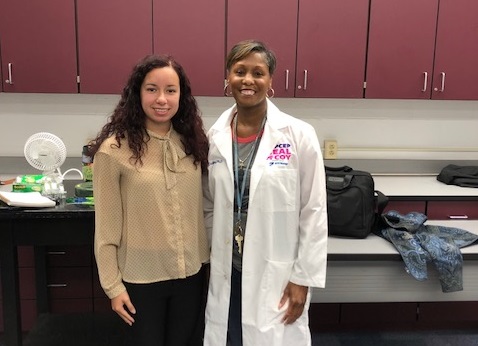 SOUTHFIELD—Using innovative approaches to teach chemistry is the theme of a new book that includes a look at how Lawrence Technological University has used pop culture to make complex scientific ideas leap to life.

Collins’ chapter, “Inorganic Chemistry: Vibranium and Marvel Studios’ ‘Black Panther,’” highlights how Collins and other LTU faculty members taught students about the Periodic Table of the Elements through one of the “Black Panther” movie’s signature characters: the fictional element vibranium.

“When I watch movies or television shows, I am watching through the lens of a chemist,” Collins wrote. “I am constantly looking for teachable moments to make cultural connections with students in the classroom.” So when Collins watched Marvel Studios’ blockbuster movie about the fictional nation of Wakanda, she seized the opportunity for incorporating vibranium into STEM curricula.

The chapter focuses on teaching strategies and workshops to engage students at both the K-12 and college level in the STEM disciplines. By asking the simple question, “Where would vibranium be located on the periodic table if it were real?” students are immediately drawn by curiosity to apply concepts in chemistry to one of their favorite movies. Thus, “superhero science” provides an opportunity to make key connections to real science content.

The chapter also highlights approaches to connecting Mary Shelley’s novel “Frankenstein”—written in 1817 and generally regarded as the first work of science fiction—and “Black Panther” to engage students in both STEM and humanities fields. Collins also discusses how a documentary on women of color in science, “Women Untold,” produced by LTU students, can be used as an educational tool to address equity in the classroom. LTU alumna Marie Anne Torres-Lopez wrote, directed and produced “Women Untold,” available on YouTube at https://www.youtube.com/watch?v=T5196ZW9s-g. Torres-Lopez, pictured above with Collins, is now a television producer in Toronto, Canada.

A native of Detroit, Collins earned a Bachelor of Arts in chemistry from Wayne State University and a master’s and PhD in chemistry from The Ohio State University. She joined Lawrence Tech in 2016 to serve as the first executive director of LTU’s Marburger STEM Center, which was established by a $20 million gift to the university from former Microsoft CEO Steve Ballmer, who took dual enrollment mathematics classes at LTU while a high school student at Detroit Country Day.

Collins said she was devastated after learning of the passing of Chadwick Boseman, who played the role of T’Challa (Black Panther) in the film. The film made a huge impact on her personally and professionally and she dedicated her book chapter to Boseman. “I dedicated the chapter to the late Chadwick Boseman because I simply wanted to honor him for his amazing portrayal of Black Panther,” Collins said.