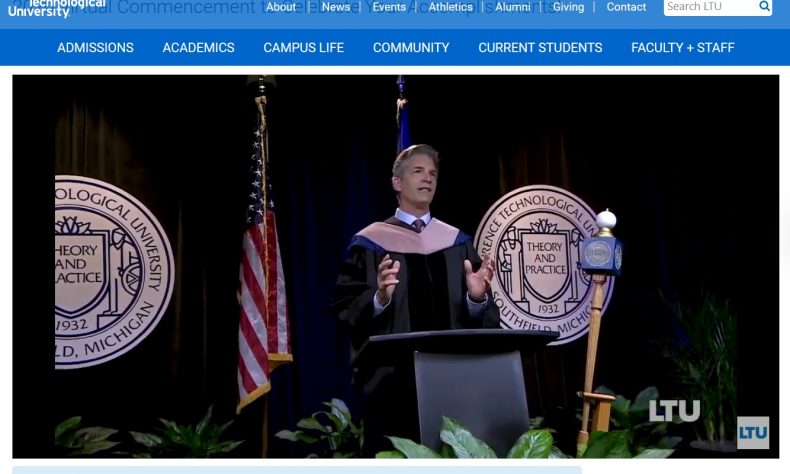 SOUTHFIELD—Gerard M. Anderson says that life can sometimes seem like a random walk—but that with hard work and perseverance, you can “write a story for yourself that you love.”

Anderson, executive chairman at the Detroit utility holding company DTE Energy, was the featured speaker at Lawrence Technological University’s 2020 Commencement exercises, streamed Saturday afternoon on the internet due to the coronavirus pandemic. At the ceremonies, Anderson received an honorary Doctor of Business Administration degree from LTU, in recognition of his long, award-winning career as a champion of renewable energy and economic development.

Anderson’s speech traced the arc of his education and career. Originally an aspiring journalist, he switched to engineering at Notre Dame to follow in the footsteps of his father and an older brother. But it wasn’t easy—early in his first semester as an engineering major, he was flunking his first engineering class. But after some soul-searching, he said, “I decided to hang in there and bear down. And that professor pushed me so hard that when I passed his class with a B-plus, all of my future engineering classes were not nearly as hard.”

Facing challenges is no fun, Anderson told the graduates. But, he said, “It’s only when we encounter challenges that we grow. And the challenges that push us close to the edge of failure help us grow the most. Athletes know well that it’s the coach or trainer who pushes you to the edge of exhaustion…that helps you take the next big step up in strength and endurance. The same is true for musicians. It’s the piano teacher who pushes the student to tackle a piece that seems out of reach…that helps the student takes the next big step up in skill.”

And don’t expect life to be a clear, predictable path, Anderson said. After graduation, he worked for an architectural engineering firm, but wanted to do more to promote renewable energy and alleviate poverty, so he signed up to pursue a Ph.D. in development economics at the University of Michigan. But when his own professors expressed doubts about the future of the program, he switched to pursuing a master’s degree in public policy, and added MBA studies as well.

A chance letter led to a job at the consulting firm McKinsey & Co., and five years later, an equally chance interview request landed him his first job at DTE. While there, he was in charge of building new energy businesses for the utility, and Anderson said, “things weren’t going well at first…. I felt like I was back in my first engineering class.” But as in that first engineering class, he said those early challenges gave him the chance to “really stretch and really grow.”

Anderson closed by telling the graduates to “hold on to that idealism, but don’t expect that every step of your career will allow you to work directly against those ideals. My career didn’t. Yours may not. But if you stay true to yourself, and if you use the intense challenges you encounter as opportunities to grow, you may well find that the random walk of your own path gives you the opportunity to work on things and give your energy to things that you will be truly proud of in the end…. Get out there and do great things.”

At Commencement, LTU also honored Susan Collet, executive engineer with Toyota Motor North America’s Sustainability and Regulatory Affairs division, with its highest alumni recognition, the Alumni Achievement Award. She has 44 years of auto industry experience, including 25 years at Toyota. Her experience includes developing information for environmental regulations, researching air quality and health effect trends, managing engineering projects, and developing automotive standards. She earned a Bachelor of Science degree in mechanical engineering from LTU in 1980, and was the first president of the advisory board for the A. Leon Linton Department of Mechanical, Robotics, and Industrial Engineering, serving from 2010 to 2019. Collet has served on many agencies, government councils, and commissions relating to the goal of advancing environmental technologies, and has had her work published in leading professional journals. A scholarship recipient while attending Lawrence Tech, she has also established the Susan & Gordon Collet Endowed Scholarship at LTU.

And Alexander Schlueter, who majored in molecular and cell biology, and Brooke Timlin, who majored in psychology, were honored with LTU’s Ed Donley Distinguished Graduate Awards. Donley award winners are selected by the LTU Alumni Association Board of Directors. The awards recognize not only academic achievement, but also participation in campus activities, employment while a student, and involvement in professional associations and the community.

A member of LTU’s honors program, Schlueter minored in mathematics and chemistry. He volunteered as a tutor in LTU’s Academic Achievement Center and was captain of both the LTU hockey and lacrosse teams, serving on the LTU Student Athlete Advisory Committee (SAAC). A member of the LTU Math and Physics Clubs, Schlueter was an Academic All-American and received the Wolverine-Hoosier Athletic Conference’s Champions of Character award. He was also a WHAC all-conference lacrosse player. Outside LTU, Schlueter is vice president of Solectriq, a company he founded with family members, which designs, engineers, and supplies solar power systems for Michigan homes and businesses. He has also volunteered at Focus: HOPE and the Holistic Health Clinic in Royal Oak, and was part of LTU’s efforts in Southfield’s Big Rake program, which rakes the yards of the elderly and disabled. He now attends Touro University Medical School in California.

Timlin served as senator and executive board member in LTU’s student government, was a member and later captain of the LTU Dance Team, and served on the University’s SAAC and the Greek Council Executive Board, as a member of the Kappa Beta Gamma sorority. She also worked with prospective and first-year students at various events, was a psychology teaching assistant, and was a member of LTU’s Student Philanthropy Council. Outside of LTU, Timlin was a lifeguard at Red Oaks Water Park, a lifeguard instructor, and volunteered with special needs students at Beech Elementary School in the Redford Union School District. She has also volunteered at events of the Make-a-Wish Foundation, Angels of Hope, and the Autism Alliance of Michigan. Timlin is now studying for a Master of Social Work degree at Wayne State University.