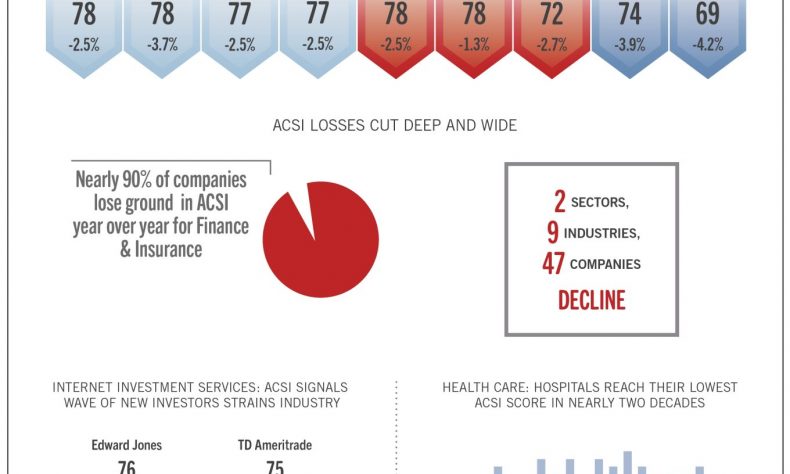 ANN ARBOR—A new report from the American Customer Satisfaction Index finds that Americans find little to be satisfied with when it comes to financial services.

Following a slight dip last year, overall customer satisfaction in the Finance and Insurance sector fell a more significant 2.3 percent to a score of 76.0out of 100, according to the American Customer Satisfaction Index’s (ACSI) Finance, Insurance, and Health Care Report 2019-2020.

Not a single industry escaped the downturn, and all told, nearly 90 percent of individual firms measured in the Finance and Insurance sector post ACSI losses in 2020.

The ACSI also provided satisfaction results for the Health Care and Social Assistance sector, which includes hospitals and ambulatory care. Overall, health care fell even further than Finance and Insurance, tumbling 4 percent to 71.7, a 15-year low for the sector.

“Overlapping roughly half of the interview period, COVID-19 upended business as usual for these sectors,” said David Van Amburg, managing director of the ACSI. “However, the virus is not entirely responsible for the wave of dissatisfaction. Instead, it amplified trends already present. For industries like banks, credit unions, and hospitals, the negative trend goes back further.”

Customer satisfaction with banks overall retreated 2.5 percent to an ACSI score of 78, yet it remained ahead of credit unions, down 2.5 percent to 77, for the second straight year.

Among banks, regional and community institutions still set the pace despite sliding 2.4 percent to 81. National banks lose the gains they made last year, falling back 2.6 percent to 76, while super regionals are hit the hardest, tumbling 3.8 percent to a category-low of 75.

Following a 5 percent tumble, former category leader, Citibank, dropped into a tie with Chase (down 3 percent) at 77. Bank of America slipped 3 percent to 75, tying Wells Fargo, down 1 percent. That is its fourth straight year at the bottom of national banks.

Among 10 super regional banks, customer satisfaction also receded across the field. Capital One had the lead, though it fell 3 percent to 77. Last year’s leader BB&T (Truist) retreated 5 percent to 76. Large drops for Citizens Bank (down 4 percent) and U.S. Bank (down 5 percent) result in a three-way tie with SunTrust (Truist), down 1 percent to 75.

Fifth Third Bank and KeyBank made up the bottom of the category. The former suffers the biggest ACSI decline among all banks, plummeting 6 percent to 73, while the latter retreated 5 percent to 72.

Internet investment services showed the most precipitous customer satisfaction decline across the sector, faltering 3.7 percent to an ACSI score of 78.

Charles Schwab and Vanguard tied for first at 79, but both are down 2 percent year over year. Fidelity lost its share of the top spot, sliding 4 percent to 78, matching the industry average.

Merrill Edge is the only investment service to resist an ACSI loss with a 1 percent uptick to 75.

The picture remains bleak for financial advisors in 2020, as customer satisfaction decreased 2.5 percent to an ACSI score of 77.

At the top of the industry, the aggregate of smaller advisory firms and Fidelity held steady at 79. Charles Schwab is also at the top but dropped 4 percent.

Smaller insurers are the new pacesetters in property and casualty

Property and casualty insurers experienced milder customer satisfaction erosion than other industries in the Finance and Insurance sector, but the industry still slipped 1.3 percent to an ACSI score of 78.

Smaller insurers held the top spot with a steady ACSI score of 80. State Farm, the biggest U.S. auto insurer and last year’s leader, fell 2 percent to 79. Geico slid 1 percent to 78, same as Nationwide, which returned to the Index this year.

AAA was the only gainer in the industry, up just 1 percent to 77, matching Liberty Mutual and Progressive, both down 1 percent. A three-way tie followed at 76 for American Family (down 1 percent), Allstate (down 3 percent), and Farmers (down 5 percent).

At the bottom of the industry, Farm Bureau and Travelers returned to the Index with scores of 75.

After holding steady for the past two years, customer satisfaction for life insurers went downhill, retreating 2.5 percent to an ACSI score of 78.

Smaller insurers sit at the top despite a 2 percent downturn to 79. Mutual of Omaha earned the same score but fell 4 percent year over year.

Allstate (down 4 percent), State Farm (down 3 percent), and MetLife (down 1 percent) matched the industry average at 78. Northwestern Mutual returned to the Index with a score of 77.

Toward the bottom of the industry, Lincoln Financial backtracked 4 percent to 75, matching its record low. Brighthouse Financial debuted at 74, tying with Thrivent, which returned to the Index. Primerica was in last place, also returning, though with a score of 73.

Member satisfaction with health insurance weakened 2.7 percent to an ACSI score of 72, bringing the industry to its lowest point since 2016. All but one insurance provider suffers some ACSI deterioration.

Humana retained the lead, but at a much lower mark, down 5 percent to 75. Despite declining 5 percent to 73, Kaiser Permanente stayed in second place, tying the group of smaller health insurers (down 3 percent).

The Blue Cross and Blue Shield Association sat at the industry average of 72 but bucks the negative satisfaction trend with a 1 percent uptick. UnitedHealth also scored 72 after decreasing 4 percent year over year.

At the bottom of the industry, CVS Health’s Aetna plummeted 7 percent to 71 to match Cigna (down 1 percent).

After dropping over 5 percent last year, patient satisfaction with hospitals continued to spiral, plunging 4.2 percent to an ACSI score of 69. This marks the industry’s lowest level of satisfaction in nearly two decades.

Things aren’t much better for ambulatory care. Patient satisfaction backslid for the first time in five years, plunging 3.9 percent to an all-time low score of 74. 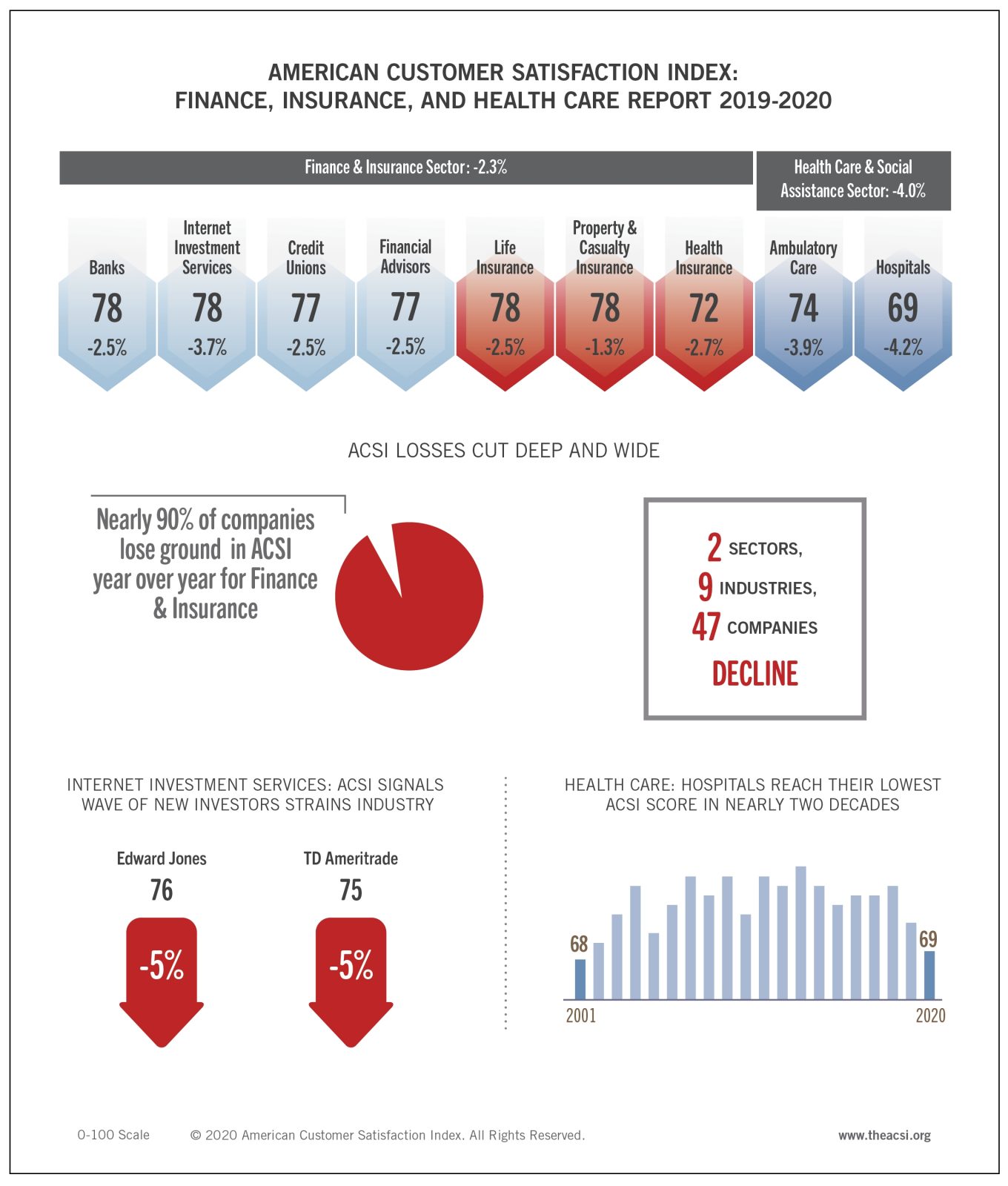