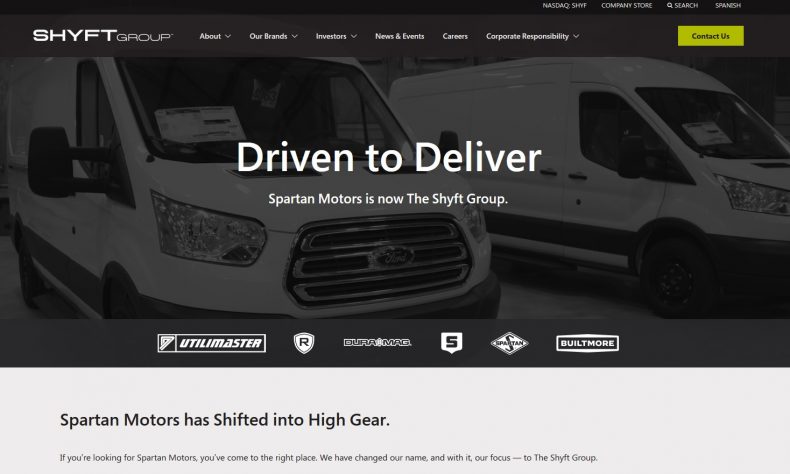 NOVI—The Shyft Group Inc. (NASDAQ: SHYF), the manufacturer of specialty vehicles and vehicle upfits formerly known as Spartan Motors, reported net income of $18.8 million or 53 cents a share, up from $10.4 million or 29 cents a share a year earlier. Revenue was $203.5 million, down from $224.7 million a year earlier, due to a one-time order from the U.S. Postal Service in 2019.

The company also released an “adjusted net income” figure for the quarter of $22.1 million or 62 cents a share, up from $15.9 million or 45 cents a share a year earlier. The figure excludes restructuring and acquisition expenses, non-cash stock-based compensation expense, depreciation and amortization, income tax, and interest expense.

“I am extremely proud of our team and of our performance this quarter, as we navigated the pandemic resulting in the most profitable quarter in our company’s history,” company President and CEO Daryl Adams said in a news release. “The strong performance reflects growing momentum from our transformative efforts to focus on higher growth and margin opportunities in parcel delivery supporting ecommerce and specialty vehicles.”

Company officials also reinstated their initial 2020 guidance to predicted revenue of $660 million to $680 million, and adjusted earnings per share of $1.28 to $1.32.

“As we approach the end of the year, I’m pleased to say that our strategy is paying off,” Adams said in the news release. “The end markets we serve continue to be strong, fueled of course by the surge in ecommerce parcel deliveries. As we begin Q4, we are seeing the increase in demand that we expected, and we are encouraged by our interactions with our customers about future growth”

For more information on these results, visit www.TheShyftGroup.com/investor-relations/webcasts .