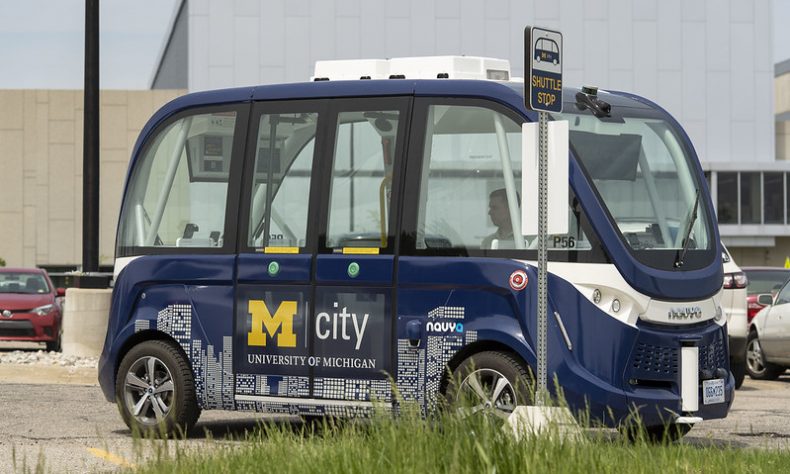 ANN ARBOR—Officials at the University of Michigan have released results from research into a driverless shuttle on the UM campus, and found high levels of trust and satisfaction among both riders and nonriders of the Mcity Driverless Shuttle.

Results of Mcity’s consumer survey, conducted in partnership with global market research firm J.D. Power, showed that 86% of riders said they trusted the technology after riding in it, as did 66% of nonriders surveyed.

UM donated one of two shuttles used for the project to The Henry Ford in Dearborn.  Manufactured by French firm Navya, the shuttles were fully automated, all-electric, and carried eleven passengers. They operated at Mcity, the university’s autonomous and connected vehicle proving ground on its North Campus in Ann Arbor.

The white paper also examines the safety and operating protocols that led to a safe and successful deployment. Extensive safety conductor training, well-defined safety protocols, and daily communication among Mcity staff, the safety conductors and the Navya support team served an important oversight role of the automated system and helped maintain a safety record free of any major incidents or injuries.

The shuttle launched in June 2018 as consumer trust in automated vehicles was declining in the wake of two fatal crashes involving partially automated vehicles in Arizona and California. When Mcity’s research wrapped up in December 2019, consumer sentiment nationally remained weak, according to separate surveys published earlier this year by AAA and J.D. Power.

“That the Mcity Driverless Shuttle research project resulted in high levels of consumer satisfaction and trust among riders, in spite of declining satisfaction with AVs nationally, underscores the importance of robust preparation and oversight to ensure a safe deployment that will build consumer confidence,” said Huei Peng, director of Mcity and the Roger L. McCarthy Professor of Mechanical Engineering at UM. “Without that, we will never achieve the full potential of driverless vehicles to improve traffic safety, cut fuel consumption and increase mobility for those with limited transportation options.”

The landscape has changed dramatically since the Mcity Driverless Shuttle launched, with many more shuttle services operating across the country, including in Phoenix, where Waymo last week began running its program without an onboard safety driver.

The Mcity project helped pave the way for other shuttle services by working with the National Highway Transportation Safety Administration and the U.S. Department of Justice to secure acceptance of making a driverless shuttle available as a transportation option to the U-M community.

Other key findings of Mcity’s consumer research include:

What Mcity learned that can be applied to future driverless shuttle deployments at U-M or elsewhere:

“Researching consumer interaction with the Mcity Driverless Shuttle emphasized the critical importance that experience brings to building trust with automated vehicle technology,” said Kristin Kolodge, executive director of driver interaction and human machine interface at J.D. Power. “The skepticism and hesitancy consumers felt prior to riding the shuttle was diminished by many through a positive experience.”

Navya and J.D. Power are affiliate members of Mcity.

The full white paper is at this link.