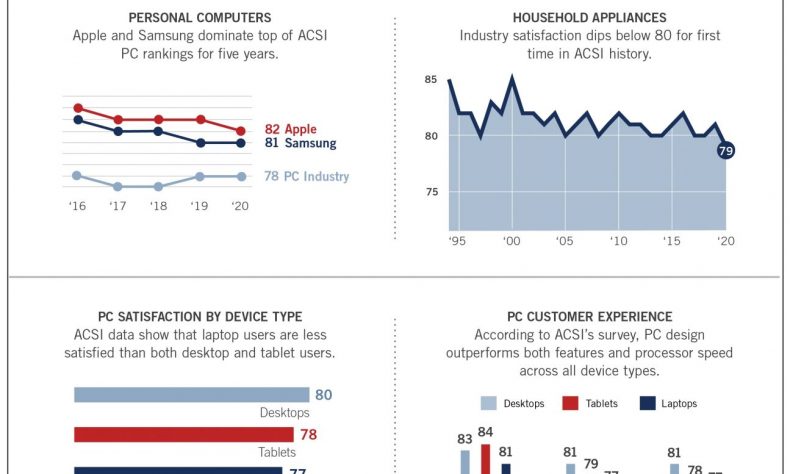 ANN ARBOR—Americans are spending more time on their personal computers at home after COVID-19 lockdowns made remote working, online education, and at-home entertainment the new normal. But while those needs contribute to higher demand for PCs, the longer-term impact remains to be seen.

After climbing 1.3 percent last year, customer satisfaction with personal computers – including desktops, laptops, and tablets – was steady at 78 out of 100, according to the American Customer Satisfaction Index (ACSI) Household Appliance and Electronics Report 2019-2020.

Desktop computer users remained more satisfied (with an ACSI score of 80) than both laptop and tablet users, despite slipping 1 percent year over year. Satisfaction with laptops was the lowest at 77, while tablets fell in between with a score of 78.

“While user satisfaction with PCs has been relatively steady since 2010, COVID-19 opened customers’ eyes to what they were missing. Part of the PC sales revival stems from users upgrading older machines,” said David VanAmburg, managing director at the ACSI. “As customers’ use of PCs increases, they’re likely to be even more critical of their devices. PC manufacturers would do well to implement customer feedback to keep satisfaction high and build loyalty.”

Samsung gains ground on Apple in the PC market

In the personal computer industry, Apple and Samsung continue their two-way battle for customer satisfaction supremacy.

Apple continued to hold the top spot with an ACSI score of 82. But its lead shrank compared to last year after a 1 percent decline. Samsung came in second place with a steady mark of 81. Along with Apple, Samsung now leads all tablet manufacturers in customer satisfaction.

Acer inched up 1 percent to tie Amazon (down 1 percent) for third place at 78.

Three PC makers fell just below the industry average with scores of 77: Asus (up 1 percent), HP (down 1 percent), and Dell (unchanged). Close by, Lenovo and the group of smaller PC makers both moved up 3 percent to 76.

Toshiba is at the bottom of the industry, down 3 percent to 75. As of August 2020, Toshiba has exited the market, transferring its remaining stake in its personal computer business over to Sharp.

Customer satisfaction with software for desktops and laptops continued its backward slide, retreating 2.6 percent to an ACSI score of 76.

After falling 3 percent last year, satisfaction with Microsoft was stable at 77. The group of smaller software makers, which dipped 1 percent in 2019, took another hit. This group, which includes Adobe, Norton, and TurboTax, plunged 3 percent to an ACSI score of 76.

Among appliances, LG and GE (Haier) narrowly edge out competitors

Customer satisfaction with major household appliances – including washers, dryers, dishwashers, refrigerators, ranges/ovens, and over-the-oven microwaves – receded 2.5 percent to an all-time ACSI low of 79, falling below 80 for the first time.

While ACSI scores for the household appliance industry are consistently close, the field is particularly tight this year, with all manufacturers scoring within a two-point range.

Last year’s leader LG slipped 2 percent, falling into a tie with a stable GE Appliances (Haier) at 80. In the laundry equipment segment, LG remained an industry leader for its paired washers and dryers for a third straight year.

Most competitors were deadlocked just below the leaders at 79, including the group of smaller appliance makers (down 2 percent), Bosch (down 1 percent), Electrolux (unchanged), and Whirlpool (down 1 percent). Bosch has been an industry leader in the dishwasher segment for three consecutive years.

More of the same for televisions and media players

Customer satisfaction with televisions and Blu-ray/DVD players faltered for the fourth consecutive year, retreating 2.4 percent to an ACSI score of 80.

TVs still rated among the top 10 industries tracked by the ACSI, yet satisfaction was below the historic average of 83. Since hitting a high point of 87 in 2016, TVs have suffered a net loss of 8 percent in customer satisfaction. However, with prices coming down on large-screen models, and several new brands arriving in the U.S. market in 2020, the industry could reverse the trend.

The ACSI Household Appliance and Electronics Report 2019-2020 on personal computers, computer software, major household appliances, and televisions and Blu-ray/DVD players is based on interviews with 14,698 customers, chosen at random and contacted via email between July 1, 2019, and June 14, 2020. Download the full report. 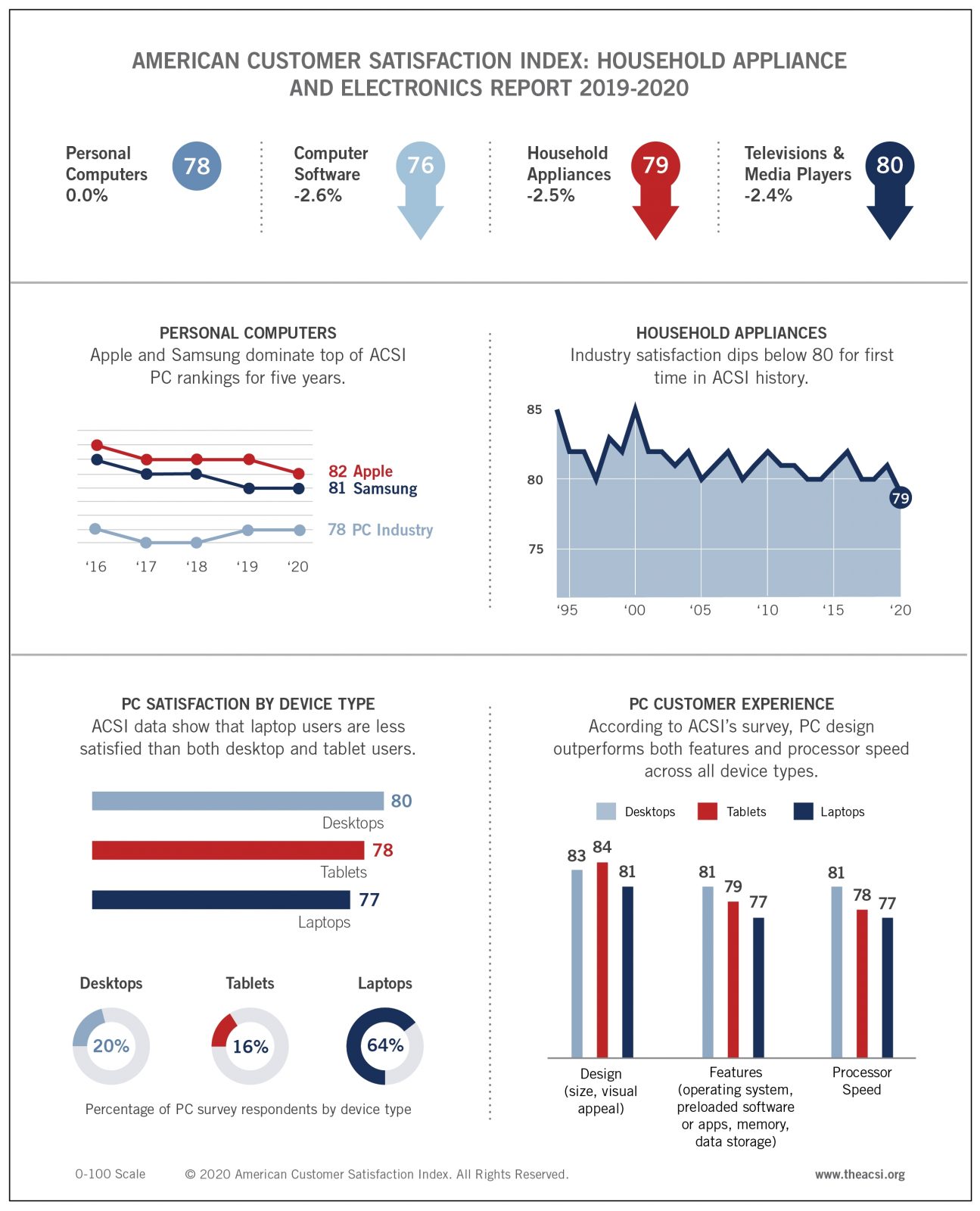