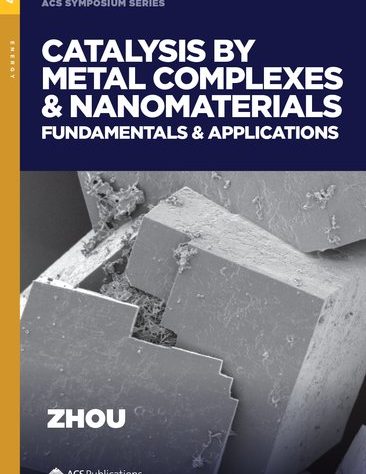 SOUTHFIELD—A Lawrence Technological University chemistry professor is hoping the new book he edited will serve as a catalyst for new and better materials used in everything from pharmaceuticals to fertilizers to pollution remediation.

The book is called “Catalysis by Metal Complexes and Nanomaterials: Fundamentals and Applications.” It is published by the American Chemical Society and will be available Aug. 25 at Amazon, Barnes & Noble, and Walmart. Meng Zhou, assistant professor of chemistry at LTU, was the book’s editor and wrote one of its chapters.

Zhou said the application of catalysis—chemical reactions caused by catalysts—is important in the production of petrochemicals, fertilizers, pharmaceuticals, and materials involved in renewable energy, chemical sensing, the degradation of pollutants, and the sequestration of carbon dioxide. The research in the book will lead to more efficient production of these materials, and perhaps to the discovery of new ways to use catalysis.

“This is fundamental research to know what catalysts are like in these applications,” Zhou said. “It’s like the way learning math enables one to study economics.”

The book’s other chapters were written by chemists and engineers from the United States and Canada, and collects the work of their presentations at the 2017 Central Regional Meeting of the American Chemical Society (ACS), held in Dearborn, and the 2018 New Faculty Workshop co-sponsored by ACS and the Cottrell Scholars Collaborative, held in Denver. Zhou said the book is “the culmination of the knowledge and spirit” of those events, and is designed to inspire students and researchers.

According to the distributor, the Oxford University Press, “the book introduces readers to the fundamentals and applications of contemporary catalysts derived from transition metals. Case studies on the selected catalysts demonstrate the unique challenges and solutions in catalyst design and niche applications. Two sections on metal complexes and nanomaterials provide contemporary examples to illustrate the principles and mechanisms of catalysis. Active researchers in chemistry, chemical engineering, or nanomaterials will find this book useful.

A native of China, Zhou earned a Bachelor of Science in chemistry from Purdue, and then Master’s and PhD degrees from Yale. In 2016, he joined the faculty at LTU, where his research focuses on nanomaterials and catalysis. He also supervises undergraduate students conducting research in a college-wide curriculum supported by a $1 million grant from the Howard Hughes Medical Institute.

Zhou said catalysis by metal complexes and nanomaterials is involved in the production of everything from plastics to OLED flat-screen TVs. Looking ahead, it’s also being researched as a method to sequester carbon dioxide and produce renewable energy from the hydrogen in water.

Zhou said he’s long been interested in the catalysis of nanomaterials, and the LTU “Department of Natural Sciences provided me the resources I needed to pursue this research. I’m also passionate about teaching undergraduate students.”

In the Fall 2020 semester, Zhou will teach University Chemistry I, a course taken by many science, engineering, and architecture students at LTU, as well as an advanced synthesis lab.