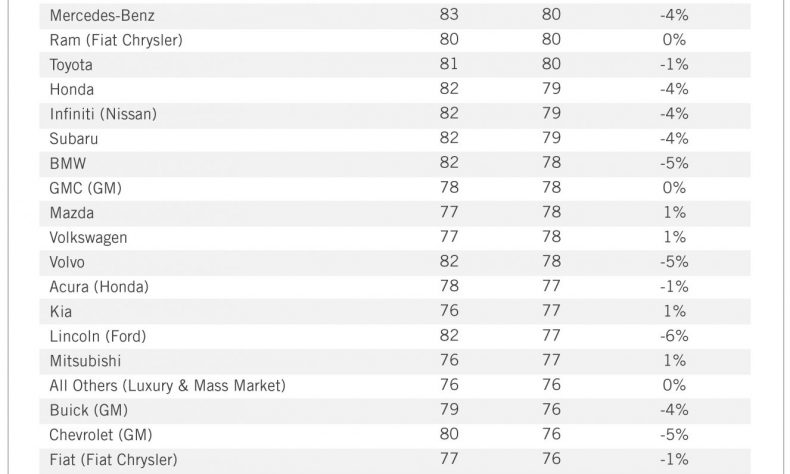 ANN ARBOR—The U.S. auto industry, like the economy at large, couldn’t escape the crosshairs of the COVID-19 global pandemic. But that’s not the only hurdle the industry has to overcome: New data indicate an ongoing, industrywide customer satisfaction decline.

Overall customer satisfaction with automobiles and light vehicles slid 1.3 percent to a score of 78 (out of 100), and 17 brands posted downturns year over year, according to the American Customer Satisfaction Index (ACSI) Automobile Report 2019-2020.

Customer satisfaction decreased across all automakers—foreign and domestic—for the second straight year and now sits at its lowest level in five years. European manufacturers held their lead over Asian and U.S. cars despite a two-point downturn to 79. U.S. automakers also fell two points to 76, trailing European cars by the same gap seen in 2019. Asian manufacturers slipped one point to 78.

“The drop in satisfaction was more alarming a year ago, with 21 of 27 nameplates registering ACSI declines, but this ongoing slide pulls the auto industry into uncharted waters,” said David VanAmburg, managing director at the ACSI. “After a 4.9 percent customer satisfaction drop over the last two years, automobiles and light vehicles hit an industry low not seen since 1999 and far below the peak score of 84.”

Customer satisfaction with the mass-market segment faded again, down 1 percent to an ACSI score of 77. Just under half of the measured brands showed declines year over year.

Ram made its first appearance at the top of the mass-market list with a steady score of 80, tying Toyota, which dipped 1 percent.

Honda and Subaru tied for second place despite each retreating 4 percent to 79. For Honda, this score represents a record low, while Subaru matches its low point. However, Subaru continued to be number one for safety among mass-market vehicles.

GMC, unchanged at 78, tied for third place with Mazda and Volkswagen, which inched up 1 percent apiece. Kia and Mitsubishi also climbed 1 percent to 77.

Two Fiat Chrysler plates round out the industry’s bottom. Dodge saw a 1 percent uptick to 75. Chrysler surged 3 percent to 73, yet remains in last place with its second-worst satisfaction score ever.

Luxury nameplates lost their luster as customer satisfaction deteriorates with every measured brand. The segment backtracked 4 percent to an ACSI score of 79.

Despite falling 2 percent to 82, Lexus led all luxury vehicles for a fourth consecutive year. Nevertheless, this score marked an all-time low for the brand.

Three luxury cars tied for second place with scores of 80: Audi (down 2 percent), Cadillac (down 1 percent), and Mercedes-Benz (down 4 percent).

Four nameplates stumbled into the upper 70s. Infiniti tumbled 4 percent to 79. BMW and Volvo each plummeted 5 percent to 78—a record low for both brands.

Acura and Lincoln tied for the lowest score in the luxury segment at 77. While Acura dipped just 1 percent, Lincoln plunged 6 percent to a record-low mark.

The ACSI Automobile Report 2019-2020 covering both domestic and foreign automobile nameplates is based on interviews with 10,414 customers, chosen at random and contacted via email between July 1, 2019, and June 14, 2020. Download the full report at this link.

The American Customer Satisfaction Index (ACSI) has been a national economic indicator for 25 years. It measures and analyzes customer satisfaction with more than 400 companies in 46 industries and 10 economic sectors, including various services of federal and local government agencies. Reported on a scale of 0 to 100, scores are based on data from interviews with roughly 500,000 customers annually. The ACSI was developed by University of Michigan professor Claes Fornell. For more information, visit www.theacsi.org. 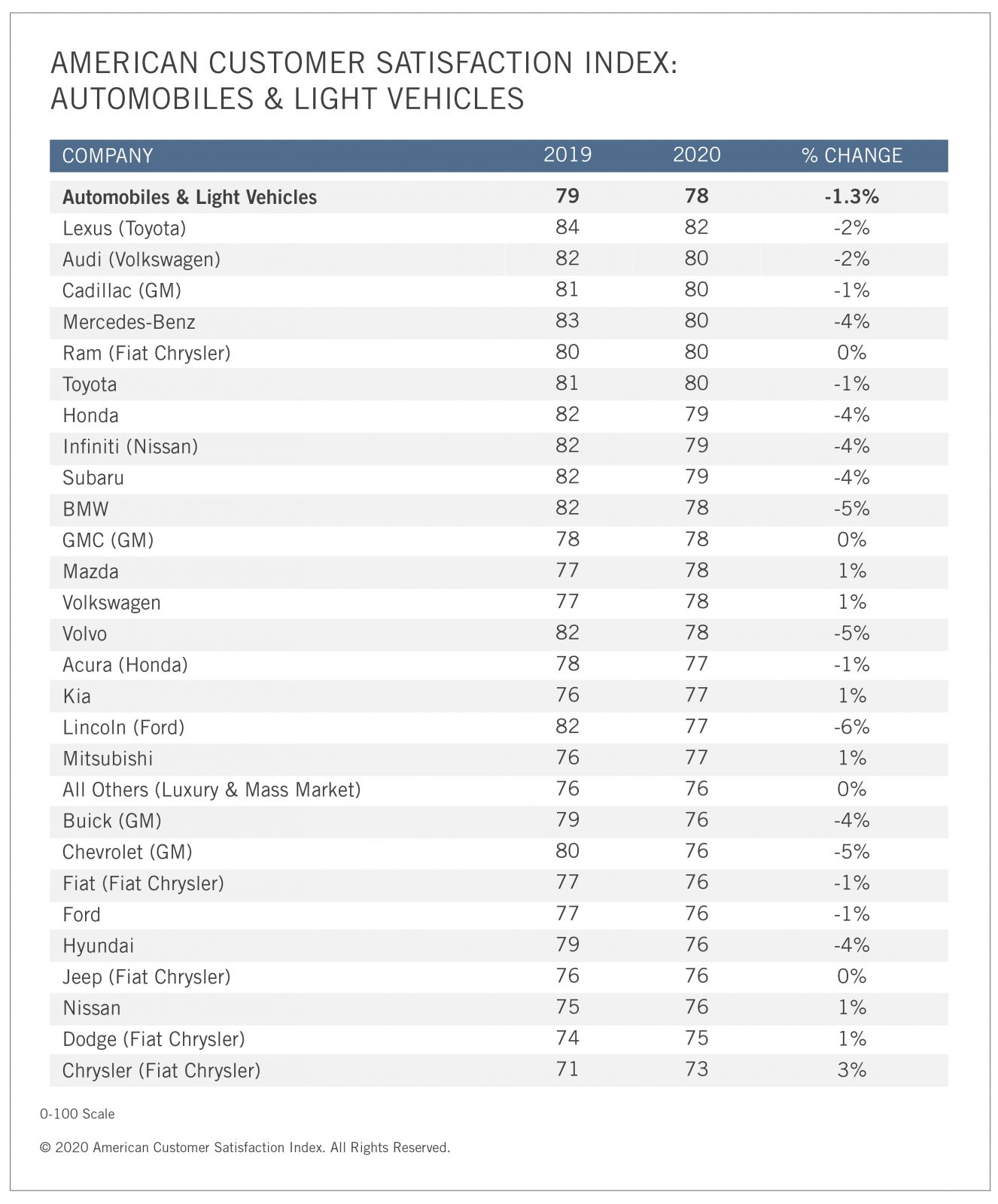