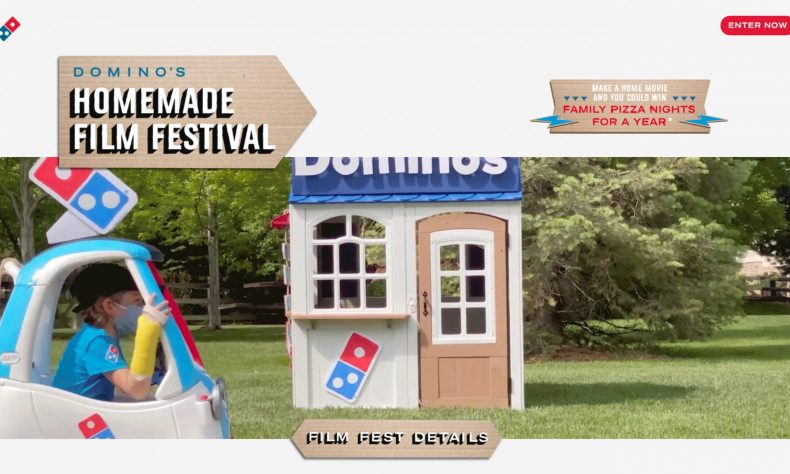 ANN ARBOR—If you love Domino’s Pizza enough to want once or twice a week for a year, and if you’re handy with a camera, Domino’s Pizza Inc. (NYSE: DPZ) has rolled out the Domino’s Homemade Film Festival.

Domino’s Homemade Film Festival is accepting videos through Aug. 21 at www.DominosFilmFest.com. Customers can visit the site to vote for their favorite home movie between Sept. 7 and Sept. 11. Domino’s will announce the grand prize winner Sept. 18.

“Millions of Americans are spending more time than ever at home and looking for activities to entertain their families,” said Kate Trumbull, Domino’s vice president of advertising. “What better way to have a fun day than to make a home movie and possibly win free pizza for a year because of it? Domino’s might even use some of the submissions in a future TV commercial!”

Domino’s Homemade Film Festival was inspired by the brand’s latest lo-fi TV spot, which was filmed with an iPhone.

For a complete list of requirements and to read about some inspirational filming ideas, such as showcasing how you eagerly wait for your Domino’s delivery, visit www.DominosFilmFest.com. Rules are at https://rules.creativezing.com/DominosFilmFest.

Founded in 1960, Domino’s Pizza is the largest pizza company in the world based on retail sales, with 17,100 stories and sales of $14.3 billion — $7 billion in the United States and $7.3 billion elsewhere. Nearly two-thirds of its sales originate in digital channels. In June 2019, through an announced partnership with Nuro, Domino’s furthered its exploration and testing of autonomous pizza delivery. In late 2019, Domino’s opened the Domino’s Innovation Garage adjacent to its headquarters in Ann Arbor, Michigan to fuel continued technology and operational innovation – while also launching its GPS technology, allowing customers to follow the progress of the delivery driver from store to doorstep. In mid-2020, Domino’s launched a brand-new way to order contactless carryout nationwide via Domino’s Carside Delivery, which customers can choose when placing a prepaid online order.