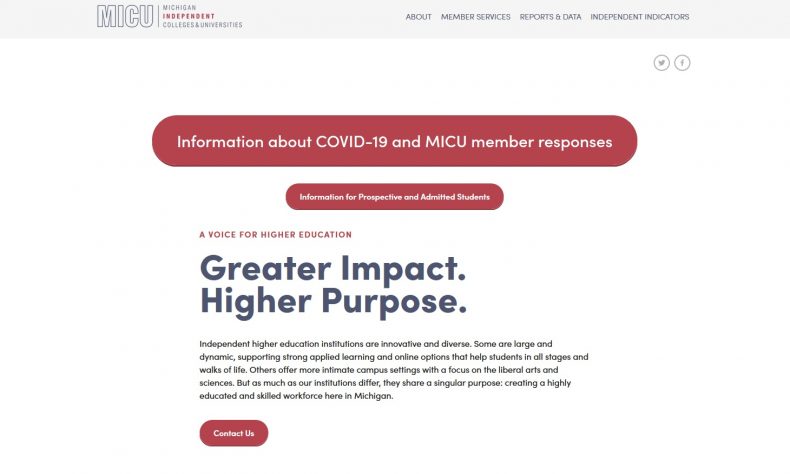 LANSING—Efforts to improve the transfer process between community colleges and Michigan’s independent colleges and universities will receive a boost thanks to a grant from the New York City-based Teagle Foundation.

The grant, awarded jointly to the Michigan Community College Association and Michigan Independent Colleges and Universities, will be used to improve the transfer process between community colleges and four-year universities in Michigan’s liberal arts programs.

“Expanding opportunities for students to transfer is a top priority for Michigan’s community colleges,” said Erica Lee Orians, executive director of the Michigan Center for Student Success at the Michigan Community College Association. “We are grateful for our partnership with the Michigan Independent Colleges and Universities and this support from the Teagle Foundation.”

According to the National Student Clearinghouse Research Center, 52 percent of all students who earned a bachelor’s degree at a four-year institution in the 2015-16 academic year in Michigan had been enrolled at a two-year public institution in the previous 10 years.

“Improving the transfer process will give students better access to additional educational opportunities at Michigan’s independent colleges and universities,” said Robert LeFevre, president of the Michigan Independent Colleges and Universities. “We appreciate the support from the Teagle Foundation and the chance keep improving the transfer process for Michigan students.”

The support from the Teagle Foundation will help MCCA and MICU explore transfer patterns between community colleges and independent institutions and faculty and administrator perceptions of transfer.  The project will generate recommendations to help increase engagement and promote successful transfers to strengthen access to liberal arts education.

The MCCA fosters collaboration, connection, and partnerships among the 28 Michigan public community colleges and their stakeholders. The MCCA provides legislative and public advocacy in Lansing and throughout Michigan, works to improve the image and credibility of community colleges, and advances numerous shared initiatives through the Michigan Center for Student Success, Michigan Colleges Online, and the Michigan New Jobs Training Program.

Michigan Independent Colleges & Universities represents the state’s not-for-profit, independent colleges and universities. Its goal is to increase awareness of the impact MICU members have on higher education in Michigan. With nearly 100,000 students at our institutions, Michigan independent colleges educate approximately 20 percent of all college students in the state. MICU serves its members through government relations, public policy development, and advocacy.

The Teagle Foundation works to support and strengthen liberal arts education, which is fundamental to meaningful work, effective citizenship, and a fulfilling life. For more information, visit www.teaglefoundation.org.