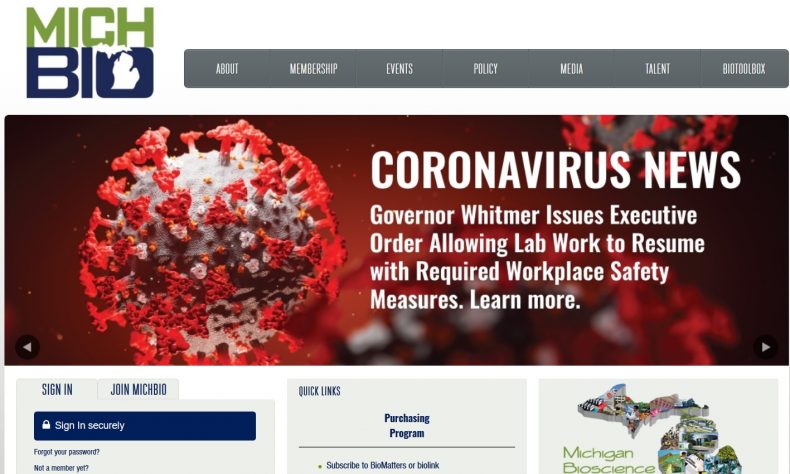 The report studies the state of the U.S. bioscience industry and its associated innovation ecosystem at the national, state, and metropolitan area levels. It noted that in Michigan, “the industry added jobs within four of its five major subsectors” over the last two-year period.

The latest analysis, developed in partnership with TEConomy Partners LLC, a Columbus, Ohio-based economic development consultant, assesses the bioscience industry’s economic footprint across the nation and state by state, and the significant role of research innovation and new company commercialization. It looks at five bioscience sectors across the state: agricultural feedstock and industrial bioscience; bioscience-related distribution; drugs and pharmaceuticals; medical devices and equipment; and research, testing, and medical laboratories.

According to the new report, Michigan’s medical device sector has grown steadily over the last two years, with a 4 percent increase in employment and 13 percent increase in establishments. This makes it the 10th largest nationally based on an independent review of all state-specific profiles that comprise the full report. In addition, it noted that “the state is 6 percent more concentrated in its employment in medical device and equipment manufacturing compared with the national average.”

The biopharma sector, 11th in size nationally by employment, continues to rebound, with 4.7 percent growth in jobs and 6.4 percent increase in establishments. Together with medtech, the two sectors account for 53 percent of the statewide bio-industry workforce.

Other key funding metrics, such as R&D expenditures, venture capital investment, and bioscience related patents are slowly improving in Michigan. The report noted that “the state is among the top tier in university bioscience-related R&D activities, with more than $1.5 billion in expenditures in 2018. This university research is supported, in part, by federal funding including from NIH where awards to Michigan institutions have been steadily rising in recent years and reached nearly $827 million in 2019. Venture capital investments in state bioscience firms have increased in recent years, and for the 2016-19 period totaled nearly $558 million.”

“Michigan’s bioscience industry continues to be a national leader in job creation, research collaborations with the state’s universities, and supportive public policy leaders that reaches into so many local communities across the state. From capital investments to research & development, our industry is critical to the health of our nation, and we are proud to work closely with MichBio to help ensure the growth of the industry in Michigan and its role as an economic driver in the state,” said Peter M. Pellerito, BIO Senior Policy Adviser for Federal and State Economic Development and Technology Transfer Initiatives.

“The biennial TEConomy/BIO report is an important and detailed analysis that validates the strength of the biosciences industry, both nationally and regionally,” said Stephen Rapundalo, president and CEO of the Michigan Biosciences Industry Association (MichBio), a BIO state partner association. “It demonstrates that Michigan’s bio-industry is thriving and remains in the top 15 nationally by size. I’m certain that Michigan’s strengths in basic research and early-stage company innovation, along with the manufacturing competencies of our mid-sized and multi-national companies will continue to grow the bio-industry, create more high-paying, knowledge-based jobs and expand its already sizeable impact on Michigan’s economy and the welfare of its citizens.”

The analysis includes a fact sheet for Michigan, which can be found via the interactive map at www.bio.org/jobs and MichBio’s site.

MichBio is the trade association committed to driving growth in Michigan’s biosciences industry and its many sectors, including agri-biotech, food and nutrition, bio-based technologies and renewable chemicals, industrial and environmental biotech, medical devices and technologies, pharmaceuticals and consumer healthcare, diagnostics and research products, testing and research services, and clinical research.