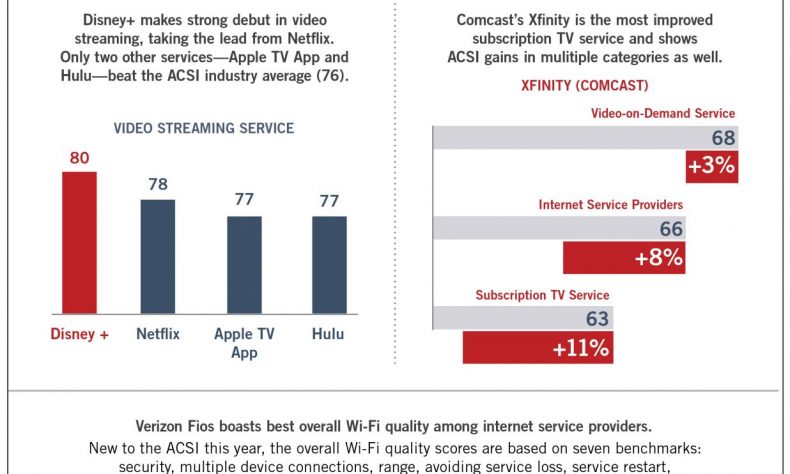 ANN ARBOR—The coronavirus pandemic has changed the way Americans work and how they spend their leisure time, putting a spotlight on both high-speed internet service and in-home entertainment options. Video streaming remains the people’s choice, with customer satisfaction steady at a score of 76 (on a scale of 0 to 100), according to the American Customer Satisfaction Index (ACSI) Telecommunications Report 2019-2020. However, other telecom categories are making moves.

“With stay-at-home and work-from-home becoming a new normal for many American households, the services offered by major telecommunications companies are more crucial than ever before,” said David VanAmburg, Managing Director at the ACSI. “Fortunately, many telecom companies laid the groundwork before the pandemic, offering their customers better services compared to last year.”

New to the survey this year for the ISP industry, the ACSI also measures key aspects of the in-home Wi-Fi customer experience. This includes satisfaction with both third-party and ISP-provided Wi-Fi equipment.

The force is strong with Disney+ following strong debut

Video streaming overall has the lock on customer satisfaction among telecom industries and outpaced subscription TV by 12 points.

Disney+ set the bar with an impressive debut, securing the top spot in video streaming – and across all five telecom categories – with an ACSI score of 80.

Last year’s leader, Netflix, fell to second place, slipping 1 percent to an ACSI score of 78. Hulu, now controlled by Disney, and Apple TV App (formerly Apple iTunes) closed in on Netflix, both up 1 percent to 77. The group of smaller streaming services showed massive improvement, rising 6 percent to match the industry average of 76, the same score as Amazon Prime Video (unchanged) and Microsoft Store (down 1 percent).

Four companies are just below the industry average with scores of 75: Starz (up 4 percent), CBS All Access (unchanged), Amazon’s Twitch (unchanged), and Google’s YouTube TV (unchanged).

Apple TV+ also made its debut in the ACSI, but, VanAmburg said, “There’s nothing particularly ‘plus’ about Apple TV+.” The streaming service scores below average at 74, tying it with Google Play (down 1 percent) and AT&T’s HBO (unchanged).

Customer satisfaction with subscription television service climbed 3.2 percent to an ACSI score of 64, as pay TV customers are happier overall with value. Despite the improvement, subscription TV sits at the very bottom of all 46 ACSI-measured industries. Cord-cutting accelerated in 2019, as many viewers moved to more satisfying over-the-top video streaming services.

Still, satisfaction improvement for subscription TV is widespread, with nine of 11 major companies showing ACSI gains year over year. Comcast’s Xfinity made the most staggering jump, soaring 11 percent to an ACSI score of 63.

Satellite providers saw their lead over top cable providers evaporate. DISH Network dipped 3 percent to 65, while AT&T’s DIRECTV fell by the same amount to 64 – back to the provider’s lowest score of all time.

The remaining companies all scored below the industry average of 64, but a seven-point gap separates the best from the worst. Altice’s Optimum increased 3 percent to 63, tying the greatly improved Xfinity. The group of smaller subscription TV providers remained unchanged at 62, the same score as Cox Communications (up 5 percent). Charter Communications’ Spectrum rose 3 percent to 61, followed by Mediacom at 60 after a 7 percent rise.

At the bottom of the industry, Frontier Communications – which filed for bankruptcy protection in April 2020 – inched up 2 percent to 58. Despite a small uptick to 56, Altice’s Suddenlink sits in last place.

Verizon’s Fios increases its advantage as Xfinity climbs among ISPs

The COVID-19 crisis showed the necessity of in-home internet as workers and students stayed home. Heading into this challenging time, satisfaction was in a good place.

Customer satisfaction with ISPs surged 4.8 percent to an ACSI score of 65, with eight of 11 providers showing gains.

Verizon Fios strengthened its hold atop the industry, climbing 4 percent to 73. According to customers, Fios is best in class for reliable service.

Despite dropping 1 percent, AT&T Internet stayed in second place at 68. Comcast’s Xfinity came in third following an 8 percent gain to 66.

Altice’s Optimum rose 3 percent to the industry-average score of 65. The group of smaller ISPs comes in just below the industry average, steady at 64. CenturyLink and Charter Communications’ Spectrum both posted strong gains of 7 percent to 63. Cox Communications rose 2 percent to 61, tying it with much-improved Windstream (up 7 percent).

Three ISPs occupy the bottom of the industry with scores in the 50s. Mediacom gained 5 percent to 59, while Altice’s Suddenlink plummeted 5 percent to 57. Frontier Communications remained last, unmoved at 55.

For the first time, the ACSI also measured key aspects of the in-home Wi-Fi experience for both customers who use equipment provided by their ISP and those who purchased third-party equipment.

Across all aspects of the in-home Wi-Fi experience, customers using third-party equipment (routers and associated hardware such as extenders/boosters) are more satisfied than those using their ISP’s equipment. For Wi-Fi security, customers using ISP-provided routers (74) were nearly as satisfied as those choosing third-party routers (75). However, the gap widened across all other elements, most notably restarting quickly after service loss (74 versus 69) and price paid (72 versus 66).

The ACSI also measured overall Wi-Fi quality for individual ISPs based on the evaluations of customers who use each provider’s equipment. Scores are based on seven benchmarks: security, multiple device connections, range, avoiding service loss, service restart, upload/download speed, and price paid.

AT&T Internet, Mediacom, Altice’s Optimum, and Charter Communications’ Spectrum all scored 70. CenturyLink, Altice’s Suddenlink, and Windstream were next at 69 apiece. Frontier Communications finished last with a score of 62.

Among third-party Wi-Fi equipment, Netgear and TP-Link tie for overall Wi-Fi quality at 75. LinkSys is next at 73, followed by ASUS at 71.

Customer satisfaction with the video-on-demand services of major cable, satellite, and fiber-optic subscription TV providers jumped 1.5% to an ACSI score of 68.

However, only three of nine companies improved year over year.

Charter Communications’ Spectrum rose 6 percent to 68, the same score as Comcast’s Xfinity, which improved 3 percent thanks to an increase in customer perceptions of value.

The remaining companies’ video-on-demand services were below the industry average for satisfaction. Cox Communications was steady at 66, while Altice’s Optimum receded 2 percent to 65. Last place Frontier Communications took the biggest hit, tumbling 4 percent to 64.

Verizon Communications, up 1 percent, tied Vonage for the lead at 74. Despite sole possession of the top spot a year ago, Vonage took a major hit, falling 4 percent. AT&T was next in line at 72 (unchanged).

The group of smaller landline providers fell 3 percent to 71. Xfinity moved in the opposite direction, up 4 percent to 70.

At the bottom of the industry, Windstream sank 2 percent to 63 and Frontier Communications fell 3 percent to 59.

The ACSI Telecommunications Report 2019-2020 is based on interviews with 46,504 customers. Download the full report.

The American Customer Satisfaction Index (ACSI) has been a national economic indicator for 25 years. It measures and analyzes customer satisfaction with more than 400 companies in 46 industries and 10 economic sectors, including various services of federal and local government agencies. Reported on a scale of 0 to 100, scores are based on data from interviews with roughly 500,000 customers annually. For more information, visit www.theacsi.org. 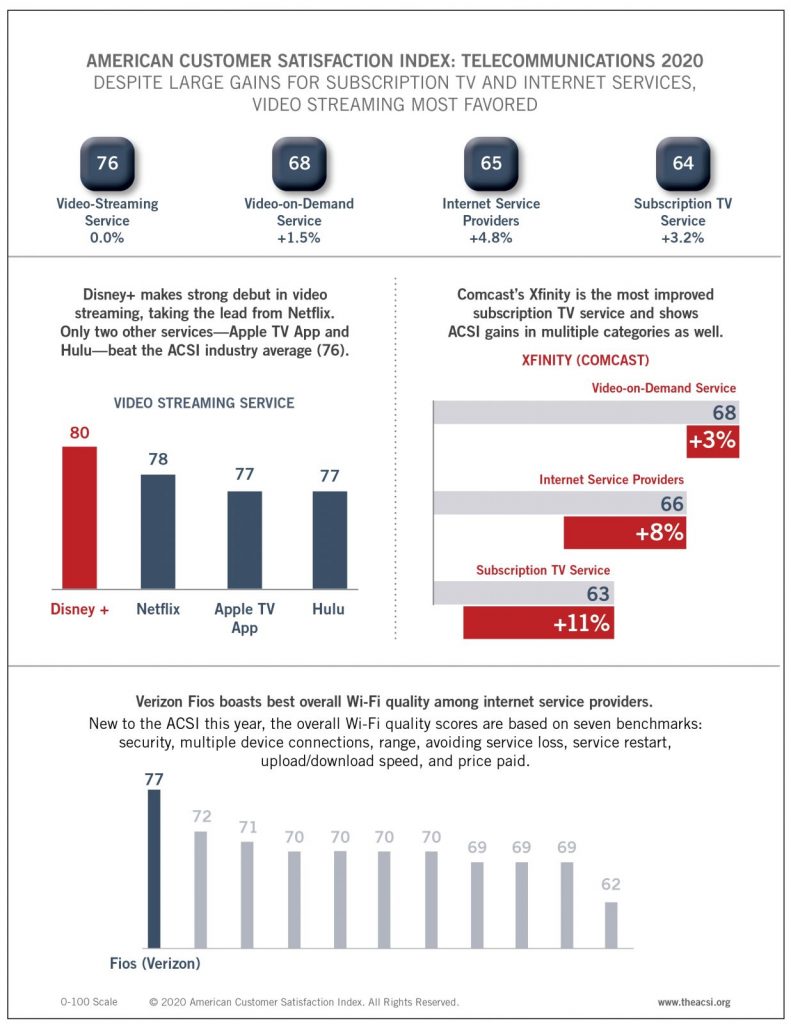